Life is Strange: True Colors feels most like itself during its prolonged Live Action Role-Playing segment. All the people in the town are playing heightened fantasy selves as they’ve come together in a cheer-up quest for a grieving child. It’s a sweet and playful section, with everyone playing very hard into their type: Ryan, the rugged-but-nonthreatening park ranger playing all the monsters and being gently pedantic about the frequencies snakes can hear at; Steph, the purveyor of cool-and-nerdy hobbies running a mysterious loot shop out of her record store; Ducky, an eccentric bar regular, setting himself up behind said bar as a quest giver and pilfering free refills.

But the LARP segment works so well because the characters in True Colors already feel like meeples. They have strongly identifiable character traits – the kind a game master could write down on a notecard – but they unavoidably feel like they exist for the main character to interact with. They have no greater wants, no conflicts, no impactful relationships with each other. In the LARP, it’s all indulgently styled around the comics drawings of a little boy. In the wider game, that indulgence is for the player.

This is most obvious with the two love interests, Ryan and Steph. Previous Life is Strange entries were rightfully criticised for tying gay love interests with ‘bad’ narrative outcomes, but those outcomes are at least the result of characters changing each other and driving the plot. With recklessness or with sacrifice, both Max and Chloe’s and Sean and Finn’s relationships are shaped by responding to each other, and to circumstances they can’t control.

Ryan and Steph, on the other hand, are simply there. They will be romanced if Alex expresses attraction to them, they will leave town in the ending if Alex wants to go, they will stay if Alex wants to stay. Their quirks and quips are endearing, but they never feel like more than the LARP versions of themselves: there to give information or resources, or be acted upon. 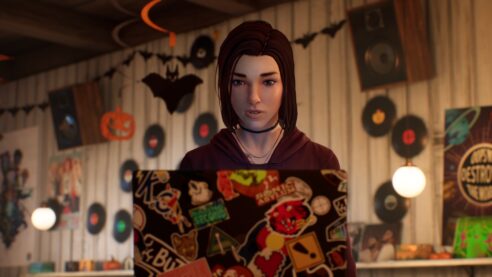 The same is unfortunately true of every other character in town. The LARP episode ends with a scene revolving around Charlotte as she lashes out at Alex in her grief. She’s been struggling with her anger at her partner Gabe for dying, with blaming her son for his death, and with hating herself for feeling that way as a mother. She’s been trying and failing to channel these feelings into sculpture before her confrontation with Alex in her workshop.

It’s a powerful scene, and one of your major choices is whether Alex should use her powers to remove Charlotte’s anger or leave her alone. This is one of the few choices that’s depicted as potentially having a ‘wrong’ answer, but both outcomes cheapen the complexity of what the scene expresses.

It’s made clear that choosing to take Charlotte’s anger would be a violation of her autonomy before you make that decision, an obvious ‘do not pass go’. If you insist in doing so anyway, she’s left feeling numb, and won’t support you in the climax of the game. (This isn’t especially weighty, as you ‘win’ the climax the same way whether or not you have everyone’s support.)

Choosing to leave Charlotte with her anger – even if it leaves her at risk of harm – ought to be a decision about conflict: Alex wants to ‘fix’ Charlotte’s grief, but Charlotte needs to heal on her own terms. But leaving Charlotte with her feelings sees her process them almost immediately, as the next time you see her, she not only apologizes for losing her temper, but admits that she was also upset that she hadn’t made fast friends with Alex. Her grief is apparently ‘fixed’ anyway, in a win-win outcome that flattens the choice existing at all.

Everything is so centered around Alex (and the player) being good and right that it necessarily robs other characters of depth in order to remove conflict. There’s an unwillingness to make the player feel uncomfortable, to let them navigate ambiguity, or have to reconcile equally valid but conflicting desires. It’s a level of artifice that’s sweet and charming for a town-wide LARP, but off putting for characters I’m supposed to invest in.

Gamer’s Handbook of the Marvel Universe