At the beginning of Citizen Sleeper, you have specific drives towards ensuring your own survival. Your synthetic body is falling apart, and you need medication to maintain it. You need food, too, and the easiest way to acquire both those things is money. It’s a familiar story, and one that gradually ticks over into one where you know where your next meal is coming from – so long as you keep the relevant plates spinning.

But everyone has different stories about their experiences towards the end of Citizen Sleeper, and for me, I was pursuing a particular quest that required me to roll a six, exactly. I was so invested in this outcome that I poured all my resources into it: I stopped paying attention to everything that the turns of the clocks meant – that my body was breaking down, that I needed food and medication. As my condition decreased, my chances of rolling a six did too, as I rolled fewer dice at the start of each day. By the time I realised I was in too deep, it was too late to pick up my routines where I’d left off: I had enough energy to meet my immediate needs, or my future needs, but not both. Instead, I spend all of my money on food and medicine that I could get right now instead, and that roll-a-six quest? I’d known it was time-sensitive going in, and set myself up for failure.

When I spoke to Citizen Sleeper’s writer and designer Gareth Damian Martin, I somewhat flippantly related this story as “a metaphor for real life” – I recognised this experience as my own, letting single-minded focus send all my spinning plates crashing to the floor, unable to be neatly picked up again. Damian Martin pushed back on that framing: it wasn’t a metaphor, because these experiences of precarity are what the systems of the game intentionally model.

“Maybe I’m being a little fussy here but I always feel like when people say something is a metaphor in a game or in fiction, there’s a sense that whatever that thing is, it can only mean one thing, and that in a way it is just a shadow version of that original meaning, something that is referential to reality in a kind of hierarchical way,” they say. “Reality comes first.”

“For Citizen Sleeper I was drawing on a complex cocktail of personal experience and structural concepts, from my own struggles with depression, depersonalisation, gender dysphoria and gig work to ideas of neoliberal social structures, ruined ‘capitalism’ and precarity,” Damian Martin continues, and it’s these experiences that inspired the conditions that materially affect the Sleeper. “Once I created the idea of the Sleeper, I focused my attention on taking that position seriously, thinking about the implications, the experience of a sleeper, and the way they would be treated socially.” 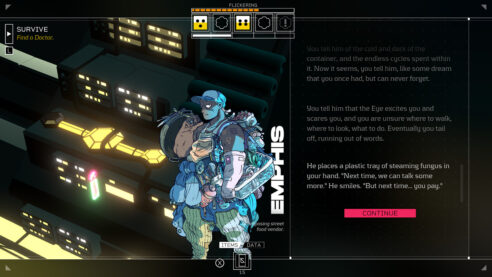 The Sleeper is an emulated mind in a synthetic body: a corporate asset, who ran away before the beginning of the game, functionally stealing themselves – and raising discomfiting questions for the player about what exactly they stole. There’s a conflicted sense of ownership over some of the Sleeper’s memories, and as much pleasure in the sharing of hot street food as there is friction in their body’s responsiveness. Their conflicts of their body are structural in addition to being personal, as their need for regular medicine leaves them vulnerable and indebted to those they depend on to provide it.

One of the ways Citizen Sleeper models precarity is with the way you roll all your dice at the start of each day. It’s up to you what you use each dice for, letting you save your best rolls for the riskiest actions and your lower ones for activities you already have an advantage in, but the shape of the day is still set when it starts. You can be well fed, recently medicated, and in the best possible position to roll a high number of dice – and still wake up and roll a handful of ones.

“That ‘handful of ones’ idea was what sold me on the design while I was prototyping the game,” Damian Martin explains. Dice and randomness can often feel unfair in games, but they wanted a way that the dice could fall in a way that resonated with the rest of the game’s themes. “Precarity so often means being exposed to risk and chance–with no safety net, no support, an unlucky moment can be catastrophic–and once I started playing with the design and rolled my first bad roll I immediately felt that resonance,” they say. “I know well what it feels like to wake up with nothing to offer the world and still have to get through the day anyway, and so I think that helped me recognize the power of this particular design.” 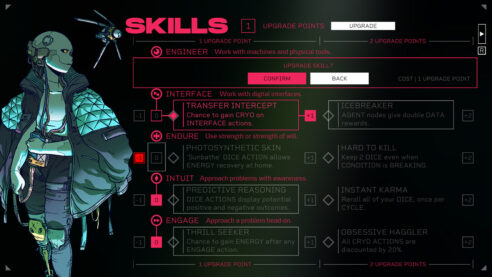 The Sleeper occupies a body that’s limited and feels able to betray them in a way that’s particularly resonant through a disabled lens. Its opening is significant, then, in how it establishes that the Sleeper’s synthetic body is, for all intents and purposes, the body they live in. In the same introduction as we’re told that the Sleeper cringes away from the delay between intent and response, we have visceral sensory memories of pain, biting cold, exhaustion. The separation the Sleeper experiences is a lived discomfort, and not one of a person piloting a mech, as Damian Martin was careful to consider.

“I was very cautious about the mind/body split, as this is an overplayed and frankly nonsensical way of understanding what it means to be human that is present in a lot of sci-fi,” they explain. “I wanted the player to feel the tensions of having a body, the implications of being in the world, rather than feeling that the sleeper was somehow free from the physical plane. I personally feel a lot of tension around my sensory experience, my appearance, the manifestations of my body, and I felt like the Sleeper was an ideal vessel for exploring these ideas in a broad and meaningful way.”

The trap of thinking about bodies this way is one that exists in-universe, however, as sleepers end up (like many of us) with a body they didn’t quite bargain for. “I am also always trying to make sure technology n my stories is an imperfect tool, and so I latched onto this idea that somehow the idea of being a sleeper was being sold to people as a Cartesian mind/body split but then when it came to experiencing that sleepers had to contend with the muddiness, friction and opacity of a dysfunctional body.” 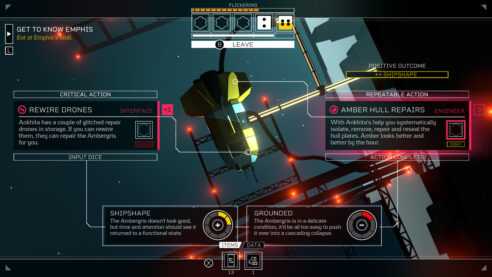 Bodies are significant for more than just the Sleeper – for everyone on the Eye, they make the structures we live within visible. In our conversation, Damian Martin spoke about how some systems are so large that it’s impossible to imagine a life unaffected by them, and on The Eye we see individuals whose bodies are irrevocably changed by their labour and capitalism. The Sleeper is marked most obviously of all, having their external body perceived as an asset, and owing a regular debt to whomever can provide the medication that keeps them alive, but nobody on The Eye is unaffected. People are physically scarred, disabled, or altered by the work their bodies have done. They continue to work to survive, but also to support each other.

“The sleeper exists at the extreme of this, their body is so in thrall to the systems of the world, so marked by them, as to have been created completely to serve them. Yet, and this is what fascinates me, how can the sleeper resist this and push against it to build community, to build a life and meaning in the shadow of all this?” Damian Martin asks. The Eye is a flawed place, and it replicates flawed structures, but it’s possible for the Sleeper to build a home there with people they care about, and flourish – if they don’t obsess on one task to the point of forgetting to eat, at least.