Hotel Dusk: Room 215 remains on my list of favorite gaming experiences, so you can get why I was bummed to learn, years ago, that Cing (the development team behind the noir title) would no longer produce games. I finally got around to obtaining an import copy of Last Window: The Secret of Cape West this year and was delighted to see Kyle Hyde in top form, with a similarly endearing cast and art style as that seen in Hotel Dusk. Not long after completing Last Window, news came of former Cing producer Taisuke Kanasaki working on a mystery game for the 3DS eShop — a second chance at life in an unforgiving industry.

Chase: Cold Case Investigations – Distant Memories (the first installment in an episodic series) released in North America in October, and of course I purchased it without hesitation. Regardless of the ties to Hotel Dusk being merely stylistic at best, I was fully prepared to consume more from a defunct team that had previously impressed (and had at least intrigued with Trace Memory), and to support them in this post-Cing direction.

The game revolves around a duo of detectives retracing an unsolved case thought to be accidental but was actually something more. Exposition is kept to a minimum, so it feels like the case falls in the player’s lap without any sort of prompting or past connection with the main characters. This on its own is a one-eighty from how Cing approached Hotel Dusk, Last Window and even Trace Memory, feeling much more straightforward and to-the-point. Furthermore, the game is largely text-based, with the only gameplay elements consisting of tapping static environments for clues and answering multiple-choice questions when conversing with suspects. As well, game segments (e.g., when the two detectives are discussing the case one-on-one in their office vs. occasions when they’re questioning witnesses in a separate room) feel like snapshots from a timeline rather than a continual experience. Realizing Chase: Cold Case Investigations followed a different structure, I adapted my mindset accordingly. 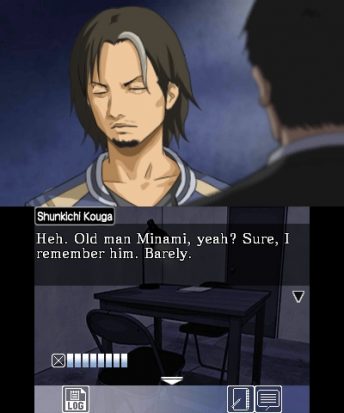 Disconnect in setup and gameplay aside, I cared more to observe the strength of the mystery itself as the experience progressed. What I was surprised to find is that even dispensing with the expectation that Chase: Cold Case Investigations would occupy a similar realm as Cing’s past works, the experience comes across as lacking in several respects. Presentation betrays the game as a budget affair, with stiff animations (e.g., slight hair movements when a character appears on-screen) and rough 2D scenes for phases of investigation. But given the project is an independent restart, these are not critical areas of contention. My issues lie more with the overall tone and writing of the script.

Notwithstanding the visual effects that occur during interrogations (think the character-vs-character animations at the start of Ace Attorney cross-examinations), the delivery lacks energy and is without the charm that Cing thrived on. There’s a point in the game where you’re given the option to ridicule someone, but it unfolds in a wooden and forced way that’s also not in keeping with any sort of momentum or established character standard (by point of comparison, Kyle Hyde’s behaviors and speech in Hotel Dusk were reflective of a personality the player could readily discern). Sadly, barring one end-game interaction, the writing operates on a flat baseline and little is done to diverge from this pattern. There’s a moment where a character meets the two detectives for no reason other than to resolve a plot device that is introduced after their arrival, which isn’t good writing.

Ultimately, not enjoying this comeback title is a bigger bummer for me than Cing’s original departure. I wouldn’t mind the short length (I completed it in about an hour) if the experience was solid, but it’s not — and I wish I could defend it more in its current state. Whether or not Chase: Cold Case Investigations ultimately turns things around in a future episode, I do hope Taisuke Kanasaki and his team won’t disappear soon after the project’s completion and that they eventually create another memorable experience worthy of Cing’s legacy — even if Hyde’s story remains in the past.

Office of the General Christmas Carol