Gran Turismo producer Kazunori Yamauchi has a vision for what a driving simulator should be. That vision has remained consistent since the series debuted in 1997, when it reset expectations for aesthetic achievement, granular customization and behind-the-wheel realism for console car games. Its tagline, “the real driving simulator,” is more instructive than it might seem at first; these are racing games, sure, but with more focus on understanding the finer points of vehicular form and function than actual motorsport.

Yamauchi’s love not only for racing but for cars themselves has always been evident in the tiniest details of his games. These titles clear communicate their expectations for players: you will collect a deep garage of vehicles, learn how to tune them and refine your technique on the track. In the process, you’ll come to appreciate cars for their craftsmanship and for the pure joy of driving. Racing is almost an excuse to simply drive and winning is a mere byproduct for executing sound driving fundamentals.

The spirit of this vision shows in which problems Yamauchi and his team at Polyphony Digital have chosen to improve or ignore over the past 25 years of refining these games. The recently released Gran Turismo 7 pushes the historic strengths of the series to new levels. Its attention to aesthetic detail has never been sharper, especially on the PlayStation 5, but even on the PlayStation 4. The physics and feel of driving on familiar courses remain remarkable after more than two decades of replicating the response and handling characteristics of real-world cars. Customization and fine-tuning are as essential as ever as well, challenging the player to squeeze out optimal performance in order to clock winning lap times.

However, some of the franchise’s most persistent criticisms have gone unaddressed. Driver AI remains rudimentary, with competitor cars tending to bunch together into clusters, while one frontrunner pulls ahead of the pack. This results in races that feel like one-on-one contests with minimal amounts of late-lap jockeying between the upper positions and without much overtaking amongst the pack. There’s more exposition around the history and stories behind the cars than ever, but actually racing those cars can feel competitively lifeless. 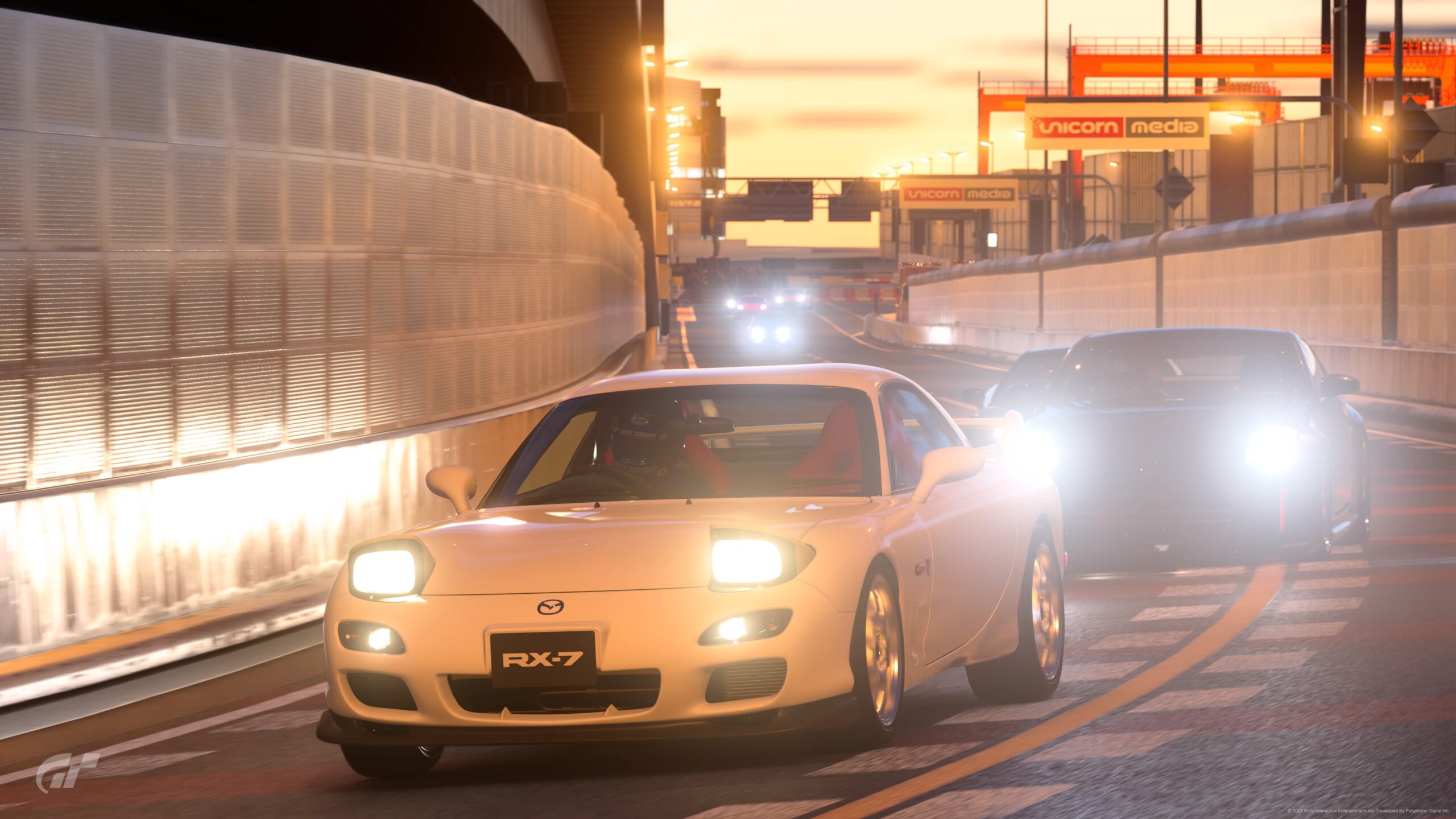 In the span of five console generations, Yamauchi hasn’t seemed interested in course correcting on this issue. Given that Polyphony Digital has developed the superhuman racing AI Gran Turismo Sophy (essentially, an advanced multiplayer bot that competes against the world’s best human Gran Turismo Sport drivers), it’s clearly not because they’re incapable of creating smarter competition. In fact, he’s appeared comfortable with getting lapped by franchises that Gran Turismo originally inspired (such as Forza Motorsport) when it comes to simulating realistic racing rather than realistic driving.

This is speculation, but it’s possible this is because he doesn’t see Gran Turismo’s AI as an actual problem at all, but an intentional design decision consistent with the spirit of creating a “driving simulator” and not specifically a “racing game.” It almost seems as if Yamauchi doesn’t want you paying attention to the other cars as competition (unless you’re playing in a competitive multiplayer mode, where designed AI is irrelevant), but to stay focused on the track and your own technique as a driver. Other cars are more like obstacles or place markers, rather than actual competitors that should be defeated.

Conversely, Polyphony Digital’s attempts to correct what they did perceive as an issue – the way the game’s progression structure has historically encouraged players to repeat races for hours to earn credits for cars – ended up creating an entirely new set of controversies that marred the game’s reception shortly after launch. In order to break players from their tendency toward grinding for high-value vehicles, the number of credits certain races paid out was dramatically reduced via an update.

The media and the fanbase both interpreted this decision as an attempt to encourage players to spend more actual money on credits to buy cars rather than earning them. If one chooses to use real cash to acquire cars, the prices per vehicle can get quite steep, as much as $40 each for the most expensive cars on the virtual lot. This led to some well-deserved player outrage, which resulted in a swift apology letter on the PlayStation Blog, increases to race payouts and a free million credits for every player. 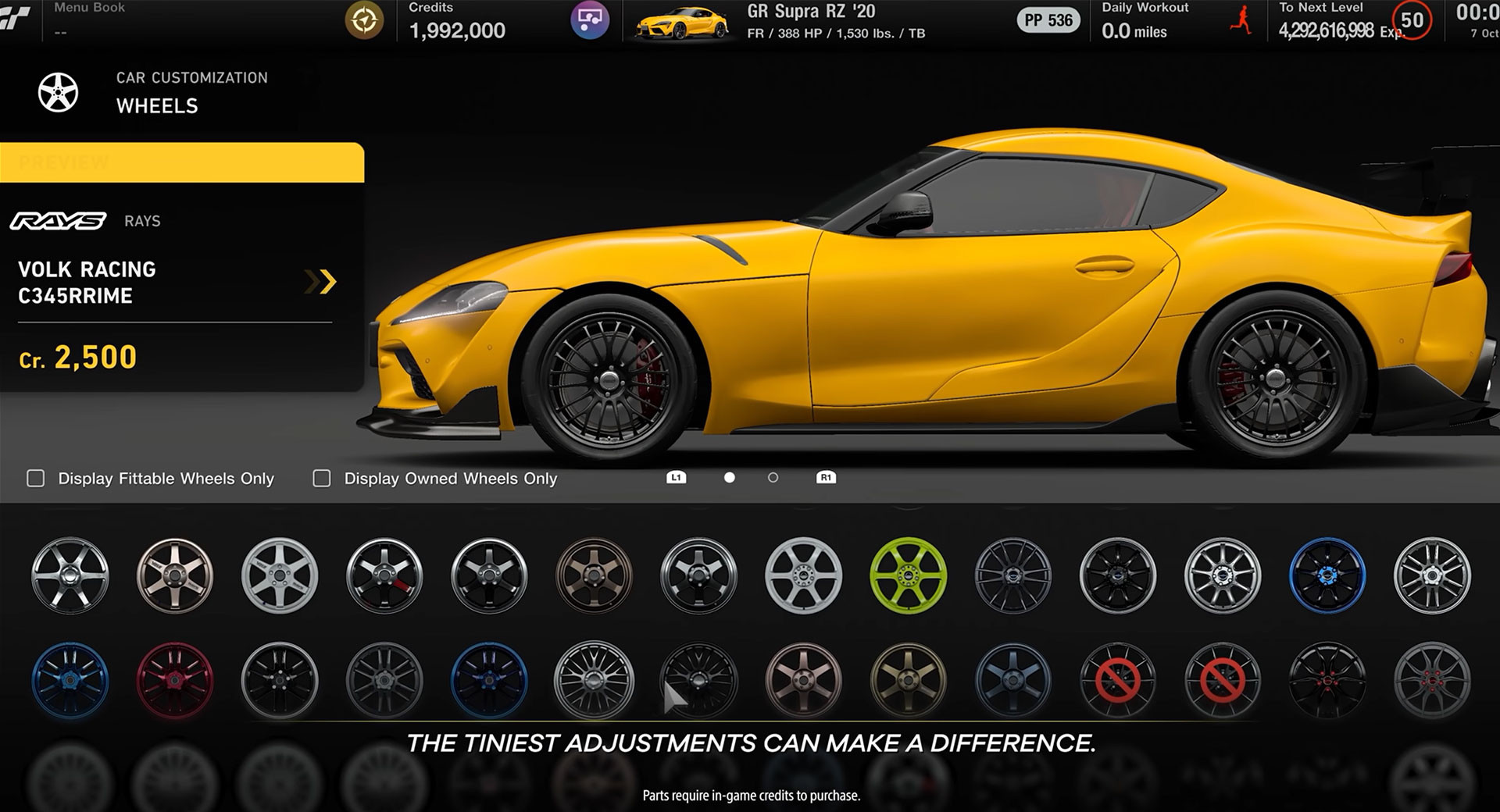 The reduction in rewards for race winnings probably was made in part to make Gran Turismo 7 more profitable and it would be naïve to think otherwise. Yet while Yamauchi’s blog post was most likely written by a PR department (typical when large companies need to do damage control), at least one part of it was probably sincere, and that’s his desire for players to stop mindlessly repeating races (which is boring) and instead follow the core gameplay loop as designed (which sees Yamauchi diving deeper into his passion for cars than at any other point in franchise history).

Gran Turismo 7’s main single-player campaign is a series of missions assigned by a cafe owner and car aficionado named Luca. You meet this man at his bistro, where he provides instructions on what he’d like for you to do (which usually entails driving certain vehicle types, makes and models in varying scenarios), and stamps your progress in a menu book. Once a mission is complete, he’ll then offer a lesson on the history of the cars you’ve just earned, explaining what makes them so (theoretically) fascinating.

If you’re willing to play through these missions first (which takes about 30 hours) before doing whatever you’d like (perhaps pursuing the game’s fastest cars), making progress through the game wasn’t that difficult, even during the brief stretch where rewards were reduced. However, embracing Yamauchi’s vision for a driving simulator with a wine bar aesthetic, one that wants you to slow down and appreciate the wide world of modern automobiles, subverts what franchises like the aforementioned Forza Motorsport have taught players to expect in the years between mainline Gran Turismo releases.

Resist the urge to play outside of the structure set in front of you and choose instead to play Gran Turismo 7 the way it’s designed, it becomes clear that this is the most fully realized execution of Yamauchi’s vision. It’s a game about going fast that wants you to slow down, a game that cuts against the grain of expectations while inviting you to go with its own flow, a game that is sprawling in scope and yet laser-focused on what it wants to achieve. This is a rare labor of love that’s willing to be misunderstood despite clearly communicating its creative intent, one that generously shares its passion with those who are willing to see it through and willing to see past its perceived flaws.

At Least Videogame Advertising Has Grown Up
Previous Post

Carnage and Blood: Two Kung Fu Movies from Opposite Ends of the Genre’s Heyday, Both with Numbers in the Titles