This is an excerpt from a feature story from Unwinnable Monthly #151. If you like what you see, grab the magazine for less than ten dollars, or subscribe and get all future magazines for half price. 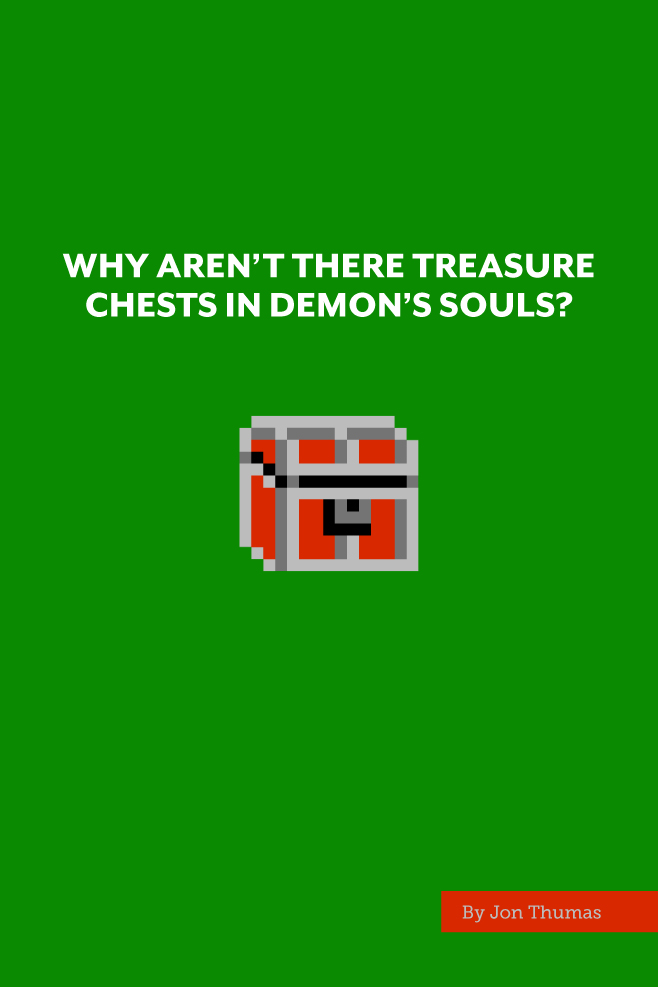 I spent my first ten hours with Demon’s Souls looking for a treasure chest to open. All those other Souls games have treasure chests in them but Demon’s Souls doesn’t have a single one! There is definitely no way director Hidetaka Miyazaki, that meticulous, delicious flavor-text writing, purple poison pool-loving man, just forgot to include them. I think it’s more likely that he simply didn’t love us enough yet.

Let me just emphasize how truly strange it is that there are no treasure chests in this game. Name another medieval fantasy role playing game that doesn’t have a treasure chest in it. Name five Japanese RPGs that don’t have treasure chests. These are probably hazardous challenges to make since I haven’t played close to everything ever made but I am willing to bet that this can’t be done, at least not easily.

Treasure chests – like swords and numbers – are ubiquitous in all these games. Dragon Quest – especially the first one – is pretty much just a game about treasure chests. You have to go around this sort-of-big map looking for unique items to convince three identical wizards standing in front of treasure chests surrounded by torches to step aside and let you open them and use the unique items inside the chests to summon a bridge to get to the final dungeon. There is one dungeon in the western part of the map that exists solely as a maze for finding treasure chests. There are about a dozen in there. No boss or NPCs or anything, just a dozen treasure chests that you can have fun finding for an hour or maybe two if you get lost.

But there is a good chance you won’t get totally lost because the nice thing about the chests in Dragon Quest is that they don’t disappear after you open them. This is sort of the point of treasure chests in these games: they beckon exploration and at the same time let you know where you have been. They are checkpoints to help you map out the world. Like everything else in Dragon Quest, they make you feel like Yuji Horii loves you and wants you to be happy.

It feels so good to find a treasure chest. Sometimes you’ll find a chest in an out of the way area that you know you’ll probably never go back to that you found because you were just really enjoying messing around in the game world. This is pretty much what chests do in most of the other FromSoftware games. 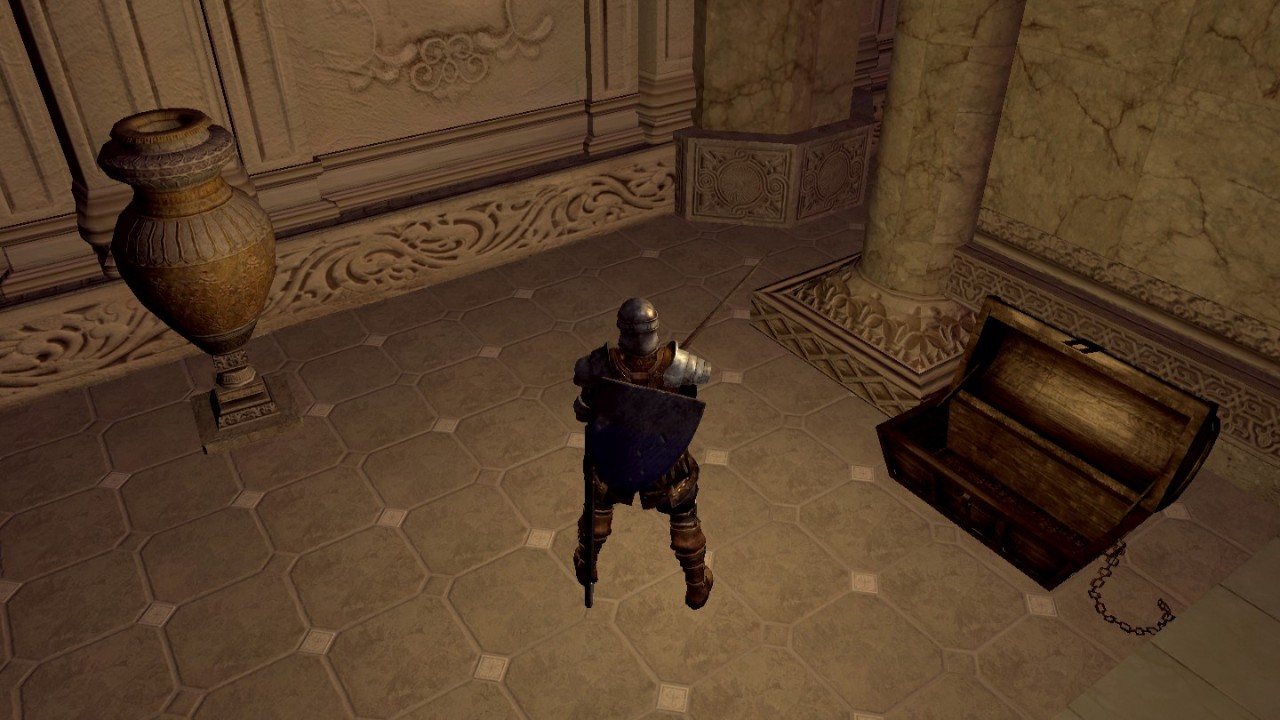 I am reminded of the initial treasure chests that you find in the first Dark Souls game. The first one you find is already cracked open and empty but establishes that treasure chests exist. Then you go up those stone stairs at the back of Firelink Shrine where the elevator from Undead Parish eventually stops after you unlock it from above. If you let your character fall into the black hole at the bottom you end up in this little patch of grass in a raised platform between some buildings. There are like four treasure chests down But, the only way to leave this platform is to drop down into the graveyard below where you probably already went and found a bunch of skeletons. You’ll of course die but at least you get to keep the things you got from the treasure chests so it isn’t too upsetting.

In addition to anticipating trauma – an “I’m sorry for what is about to happen” from director-dungeon master Miyazaki – chests also appear as rewards for overcoming a challenge, placed in an area to which you will probably never return because of how terrible it was to get there. Like after a mini boss in a 10’x10’ basement in Elden Ring. This is how many of the chests are placed in Bloodborne. There is always a big ornate chest at the end of the chalice dungeons and sometimes you get to a room full of those terrible long-haired looking guys that shriek and run at you brandishing quivering bodies shaped like electric guitars and after you kill them there are four treasure chests in the room, each containing materials to make more chalice dungeons and do it all over again.

Chests can be gifts for overcoming obstacles or exploring, but they can also be sources of trauma themselves. The chest mimics in the Dark Souls games – another Dungeons and Dragons-cum-Dragon Quest RPG fixture of tongue-lolling monsters pretending to be treasure chests – are terrifying. Players probably feel affection toward and comfort from treasure chests by the time they reach a mimic in the first game, which isn’t until the second act. From then on there is a mimic in each of the late game areas. The third game in the series turns things up a notch by having at least a dozen mimics throughout the game. Chests cease to be a mark of success, exploration, or checkpoints. Chests become tests of faith. The fact that the first or second chest in Dark Souls III is a mimic ruined me. Even though I am mostly sure that there are no such chest monsters in Elden Ring I still do a charge attack before opening them. 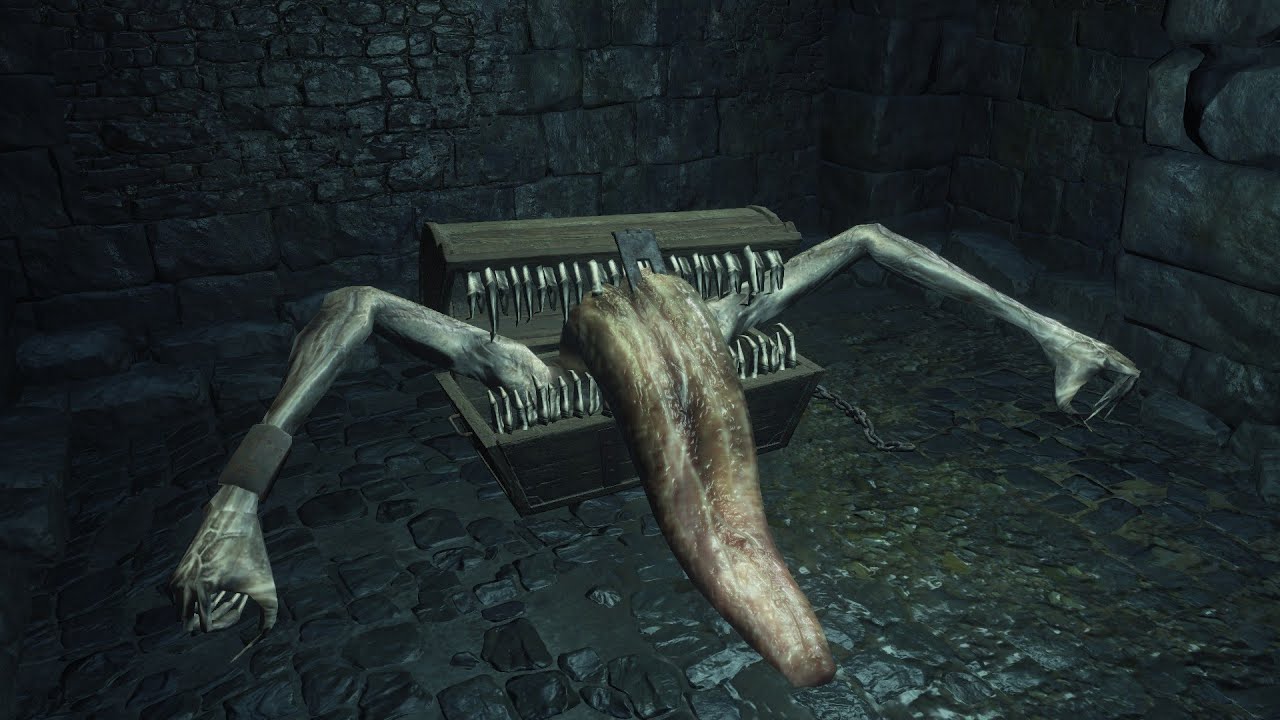 Mimics are jarring because they violate the trust and tenderness that treasure chests engender. In reminding you that you’ve been at a certain location before and giving you wrapped gifts to reward tenacious exploration, chests begin to make a place feel like home. They are just as comforting as luminous checkpoints – bonfires, lanterns, sculptor’s idols, sites of grace – in recent FromSoftware games.

The checkpoints – if you can even call them that – in Demon’s Souls aren’t really comforting at all. First of all, they aren’t even check points but really just starting points with fast travel that get increasingly more annoying to look at the more you die and start back at them. There are no moments of relief seeing a bonfire or site of grace peaking from behind a stone wall or gleaming at the end of a forest path. You just get them when you beat bosses or when you start a new world. This makes them completely forgettable. I forgot what they were even called when writing this essay and had to look it up. They are called Archstones, which I think is also the name of the big, engraved stone tablets that you use to travel to each world from the Nexus. That is confusing. The checkpoint Archstones also look weird, sort of like a tapir with a sword sticking out of its head. There is nothing comforting about them.

This lack of comfort extends to the dungeon design in Demon’s Souls, which doesn’t have a ton of easy-going hangout moments. This is sort of a joke because most of those Souls games feel built around Shigeru Miyamoto’s “Dungeon Supremacy” philosophy. But this really struck me in Demon’s Souls upon discovering that you could only get to the invisible crow that trades you items by going halfway through the level with all the silver skeletons to get to it. No mid-way checkpoint or anything. The same goes for most of the NPCs that sell you stuff. They are always halfway into the level. Demon’s Souls doesn’t want you to be comfortable. It doesn’t want you to eventually feel like you are home there.

Treasure chests are kisses from director and dungeon master. They might as well be wrapped and tied with ribbon. They are presents that make you feel loved and at the same time encourage love as you begin to know a game world as a place. They make it feel like home. The reason why there are no chests in Demon’s Souls is because the game isn’t supposed to feel like home. I’m not saying that this is a strategy for difficulty or that the game doesn’t want you to play it or get used to it unless you push through its gauntlet or something else that would imply that this game is “hard.” Rather, I am suggesting that the game wants you to get excited about what it offers without falling in love with its geometry.

Jon Thumas is currently writing a dissertation about religion and society in medieval Japan. He also writes a hardcore fanzine and goes to sleep every night thinking about videogames. Research and writing updates on Twitter @jonthumas and zine updates on Instagram @wdwgfanzine.

You’ve been reading an excerpt from Unwinnable Monthly Issue 151.

Cyberpunk 2077 is a Haunted House