Many of my favorite Mexican horror pictures are from the heyday of the 1950s and ‘60s, when luchadors regularly went up against a variety of classic movie monsters, to be sure, but we also got more serious-minded gothics like The Witch’s Mirror (1962). Despite this, I had not seen much of the country’s earlier output until now, when Indicator – one of my favorite distributors of especially older films on Blu-ray – brought new life to a pair of extremely early horrors from the very beginnings of Mexico’s output of sound film, lovingly restored and newly released on region-free Blu-rays.

“They claim that the death of this individual was caused by the sight of a ghost at midnight.” – La Llorona (1933)

Mexico’s first talkie horror film – its first sound film was the melodrama Santa from the year before – La Llorona was considered lost for nearly a half-century before a badly-abused 16mm print surfaced, from which Indicator sourced this scratchy, unusual Blu-ray release.

While it was one of the first films to tackle Mexico’s legendary “crying woman,” it was far from the last. Indeed, American theaters and streaming services saw not one but two major releases with the ghost in the title in the last few years. The Curse of La Llorona, a sort of stealth entry into the Conjuring franchise, and Guatemala’s own La Llorona were both released in 2019, and both showcase the extreme variety of uses to which this well-known spectral figure has been put over the years.

Even as early as 1933, however, director Ramon Peon was already deconstructing and reimagining the classic tale, which, as the documentation that accompanies Indicator’s handsome Blu points out, was kind of the norm for the crying woman. “The details of her legend depend on the storyteller,” Emily Masincup writes in the booklet accompanying the disc, “contingent not only upon what version(s) of the story they have heard, but also on their own motivations for sharing this story with others.”

That’s certainly true of Jayro Bustamante’s 2019 version, and I think it’s probably equally true here, even if their ultimate motivations are pretty different. Masincup makes a good case that the motives of Peon were most likely heavily invested in not only selling the idea of sound pictures, but in specifically selling the idea of them as vehicles for horror. Hence, the first voice we hear in La Llorona is not a person talking, but the menacing and yet piteous wail of the eponymous specter – actually supplied by a puppeteer named Carlos Vallejo Espinal.

No one reading this should be terribly surprised that I’m a huge fan of movies from the ‘30s and ‘40s, but even I am the first to admit that, for various reasons, you have to approach them differently than if you’re watching a movie that came out yesterday – and, of course, vice versa. Nowhere is that more true than with La Llorona, which has the added stumbling block of that worse-for-the-wear 16mm print I mentioned earlier.

Even as these sorts of things go, I was not a huge fan of this La Llorona, which still has one foot rather awkwardly planted in the silents that preceded it. But that’s really beside the point, in this case. It is a piece of history – not merely Mexican cinematic history, not merely horror history, but a broader snapshot of a period in time, and the changes that were happening around it.

As that, it is fascinating and, perhaps more to the point, important, whether you find the end result entertaining or not. It is the recovery and distribution of movies like these that make physical media so vital, and to that end, labels like Indicator are doing the proverbial lord’s work in helping to make them accessible to the general public, while also providing a wealth of context, not merely for the film’s production and release, but for the state of the print that the Blu-ray was restored from – and why all of that matters.

“Shadow was born in the monastery and has never left it.” – The Phantom of the Monastery (1934) 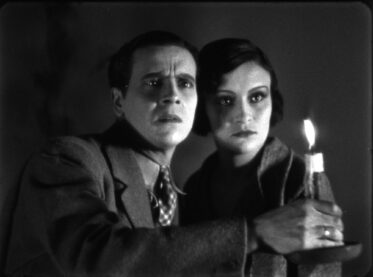 Now this is more like it! Though released only a year after La Llorona, Phantom of the Monastery – also known as The Phantom of the Convent – shows a big step up in the evolution of talkie horror filmmaking. Not as beholden to the silent films that came before it, Phantom looks and sounds, at least in some ways, more like what we had already come to expect from the horror movies coming out of Hollywood in the ‘30s. And yet, like La Llorona, it is also uniquely Mexican in many ways.

According to prolific screenwriter Juan Bustillo Oro – one of a handful of names credited in the screenplay of Phantom of the Monastery – producer Jorge Pezet proffered the nugget that formed the basis of the film. “He wanted a horror movie,” Oro recalls in the booklet that accompanies the Blu, “but his sketch was very vague. It was only clear that some lost travelers found a hidden monastery, where they suffered a night of terror among the mummies abandoned there.”

The mummies in question are in many ways at the heart of the film, even if we don’t actually see them until virtually the final shots. When we do, they are real mummies – the ones that inspired Pezet’s idea, in fact. The dozen mummies which are still to this day on display at the Museo de El Carmen in Mexico City.

According to Oro, he took Pezet’s rough sketch and created “a simple story, which I don’t know if I can qualify as my own at all.” He wanted to avoid “the common places where Yankee cinema went,” including things like “the disappointments of shadows of pretend monsters” and the “animation of the mummies.” In its place, he proposed a sort of morality play about a trio of friends – a married couple and their traditionally more macho companion. “A guilty passion would be incubating between the friend and the wife,” Oro wrote, which would become the meat of the film’s conflict.

Citing disappointments with previous collaborations, Oro was not present for most of the filming, and says that Fernando de Fuentes directed the picture “without a great deal of imagination, as was his way, but with good taste, efficiency, and dramatic success.” While perhaps that lack of imagination was true compared to what Oro had in mind while writing the screenplay, it’s hard to lay such a claim at the feet of Phantom of the Monastery, which is full of expressionist shadows, eerie sounds, haunting images, and compelling camera moves.

In fact, prior to the release of this Indicator Blu-ray, I had seen precisely one frame of Phantom of the Monastery, a shot of the protagonist Eduardo reaching up to touch the shadow of a bat on the wall, which was more than enough to sell me on the film as a whole. And while that scene is, indeed, one of the more striking pieces of imagery in the picture, it is far from alone.

Much of the visual poetry of Phantom is achieved with the help of some well-chosen location shooting. As an essay by Maricruz Castro-Ricalde points out in the booklet that accompanies the Blu, the first of these locations was “an abandoned Jesuit educational complex” north of Mexico City. The complex itself, which provides both interiors and exteriors for the film, is described as a “jewel of seventeenth century churriguresque art,” named for Spanish architect Jose Benito de Churriguera. Of equal interest are the paintings inside the building, which are said to have been created by the “indigenous Otomi people of the region.”

The other significant location is equally important though less widely used – the former convent of El Carmen in Mexico City, where the real-life mummies were photographed and where they can still be seen today, in a space not unlike the one where our protagonists view them in Phantom of the Monastery.

These all give the film a classical feeling, but the marketing department was not above resorting to a little ballyhoo, at the time, either. The booklet also includes a brief, contemporary piece on the promotional efforts that attended the film’s premier, including displaying a “collection of mummies” in the “windows of the main shopping malls” in Mexico City. These were not the real mummies that were used in the film, but they nonetheless generated “much gossip and interest.”

Perhaps even more evocative was a more mobile advertising campaign. “Every day a ‘giant ghost’ has been walking the streets of the city,” describes the anonymous essay, originally published in El cine grafico before the film’s release in 1934, “wrapped in a long, black robe, with his hands crossed on his chest and his face – a skull – horribly contracted into a painful grimace. On his back is a sign that reads The Phantom of the Monastery.”

The essay goes on to describe how the “ghost” is constantly followed around by a “legion of children who delight in his appearance” and, I’ve gotta say, I’d be right there with them…

Horror, la llorona, mexico, sound film, The Conjuring, The Phantom of the Monastery