This is an excerpt from the cover story of Unwinnable Monthly #148. If you like what you see, grab the magazine for less than ten dollars, or subscribe and get all future magazines for half price. 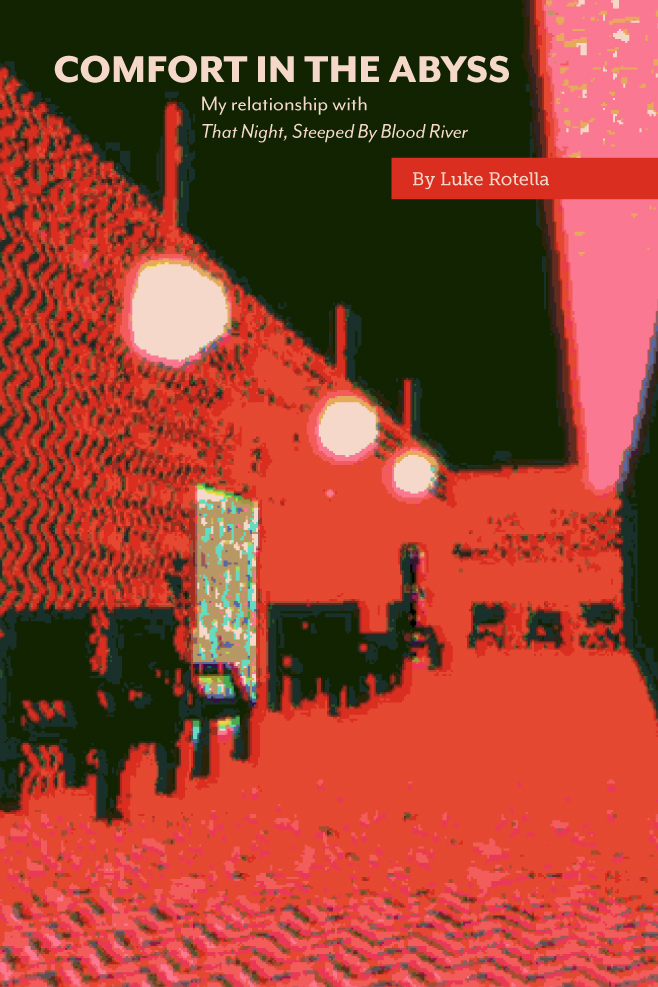 Sometimes when I sleep, I feel like I’m shrinking inside myself, inside my bed. My thoughts turn to paranoid delusion as I feel I’m getting smaller and smaller until I feel completely dwarfed by my room. It starts to feel alien, then I start thinking I’m the alien and the space was always the normal one. Then, everything starts to feel weird. Existence becomes such a strange and uncomfortable anomaly, my sense of self calling attention to itself becomes a cosmic joke. But eventually, I fall asleep and I travel somewhere else. Falling through the void into some place I will eventually emerge from with knowledge of something deeply interior.

That Night, Steeped by Blood River is a game by Taylor Swietanski that simulates the indescribable and unknowable. It’s an incoherent, incomprehensible nightmare. One that may not be remembered when you wake. And, even if you do, it may never make all that much sense anyway. What is left though, is an imprint of your experience. Images and feelings start coming back to you. Then through moments of clarity, your mind puts the pieces together and forms a narrative.

Like a white rabbit, a phone call lures you through a Lovecraftian light tunnel. The game places you in a space between your world and its own. A mystery pulls you into its meditation and further from your own rational thought. Before you realize, you answer the phone and you’re transported once again. This time, you’re in an elevator with a melancholic, distorted song. It takes you down to a lobby. This is where everything spans from and comes back to for a while, it’s the game’s hub. 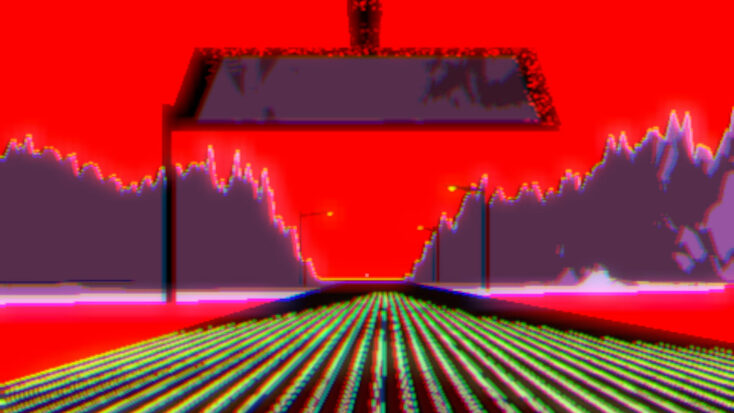 Structurally, the introduction mirrors that of David Lynch’s Twin Peaks. In its pilot, Laura Palmer (the homecoming queen in an idyllic American town) is murdered. The show acts as a police procedural as the local law enforcement and FBI try to find the killer. Meanwhile, the people around Laura deal with grief in their own personal ways. To Lynch, Laura’s death was a “golden goose.” It laid a trail of golden eggs that kept the mystery and surrealism circulating through the town. It eventuated in Dale Cooper, a detective who relied on intuition and dreams becoming trapped in one such dream. He followed Laura’s murder all the way through to its logical conclusion, to the waiting room to a place beyond our comprehension.

That Night Steeped by Blood River uses similar iconography in its lobby. Please sign in, it asks you. And you do to proceed. Lined in chevron patterns and endlessly liminal pathways, the lobby pulls you in and pushes you away. Its pathways take you to places that don’t logically connect but they deeply resonate. When you’ve reached the end, it sends you back to the waiting room and asks you to sign in again to proceed to the next permutation.

Cooper enters the waiting room after visiting in his dreams. It pulls him into a room with red curtains, a chevron floor and a statue of Venus de’ Medici. Every effort to leave this room leads him through adjacent corridors back to the central chamber. It’s hard to tell if he accepts the gravity of his situation, that he has transcended the role of a TV detective in a place beyond both TV and time. But, he is stuck and is only allowed to leave after 25 years. Its obtuse design is one that resonates with me though. It’s iconography to me became warm and comfortable, a place beyond the concerns of humanity, its borders tight, and anything beyond is incomprehensible. It’s a deep and chilling mystery without resolve. 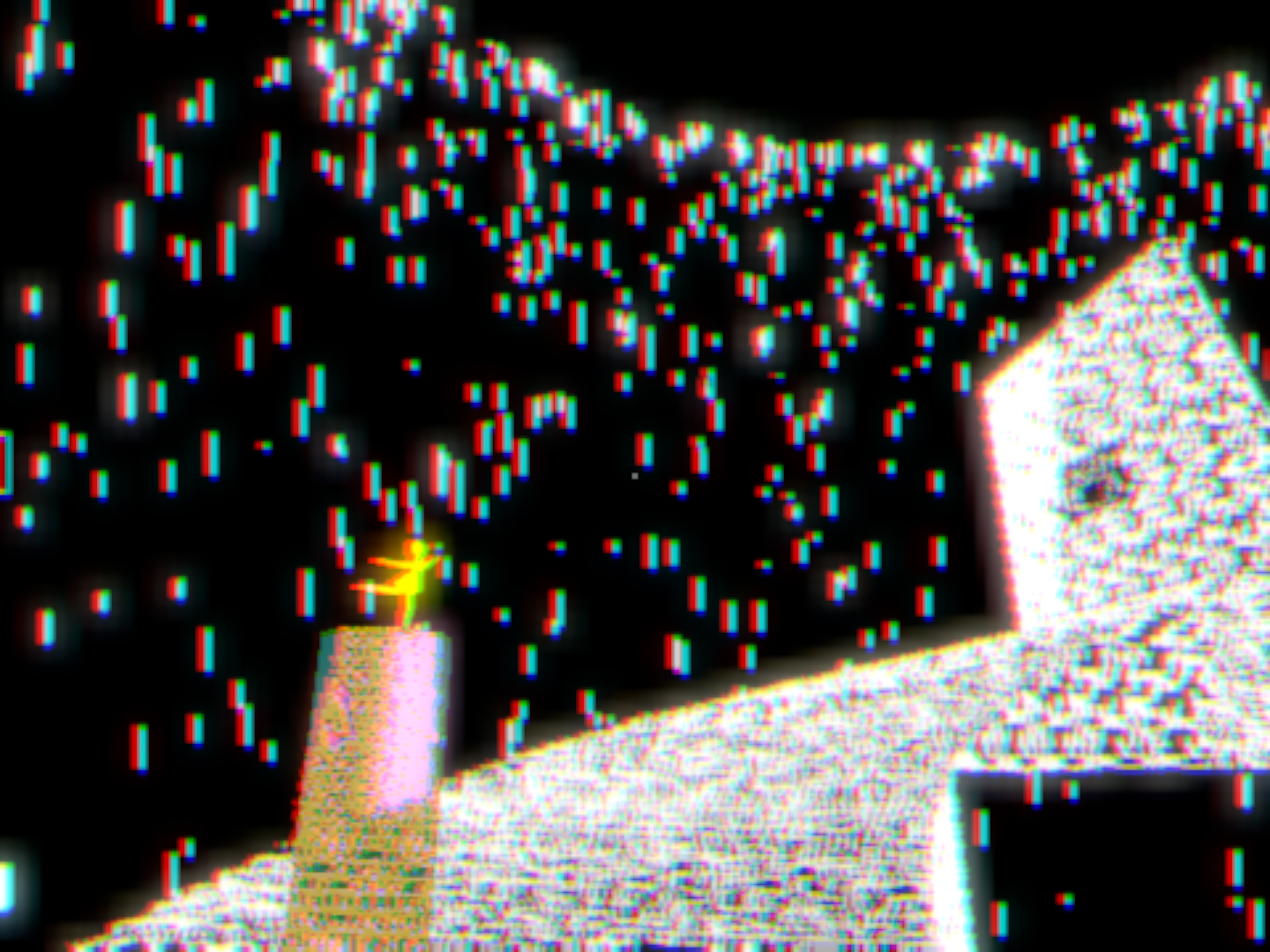 David Lynch and I had a similar dream. I always found that interesting. In Lynch’s, he talked about seeing his father in a desert, but he wasn’t sure if it was the good one or the bad one. In mine, I was very young, and I remember being in the garden with my Nonno. He told me never to go near the chicken cage that was at the end of the yard. I forgot about his warning and I remember being deep into the garden before remembering that I’m somewhere I’m not supposed to be. I saw my Nonno appear from the very end and knew intuitively this is the bad one. It wasn’t my Nonno, but it was his evil doppelgänger. I ran and he started chasing me and, in the distance, I saw the good Nonno. He told me to never go to the chicken cage again and tried to ward the bad one off. I went into the house and dialed for help on the phone, and I woke up. This dream occurred twice. I now wonder if I was dialing to myself, asking to wake up.

In Richard Linklater’s Waking Life, the protagonist has a brief exchange with a woman in a train station in his dream. Nothing memorable. Later in the film, in another dream, he sees her again. She looks and sounds different, but he recognizes her as the same entity. In another of the film’s vignettes, two strangers sit together and talk, she tells him about a show she plans on making. He realizes the absurdity of the conversation and tells her that she isn’t real, she continues. There’s something both deeply disturbing and comforting about the exchange. In the dream, this woman is her own entity talking about her plans despite being a product of a dream. Was she an imprint of someone the protagonist had known, a representation of his psyche or something else? I suppose it doesn’t matter but I always found it strange that this manifestation of a dream took her own form and established her own interests and personality. A personality that transcended form and could be recognized in another dream.

Luke Rotella is a Melbourne Game Developer and Filmmaker. He likes surreal and meditative work and sometimes he writes about how he experiences them. Follow him on Twitter @Kwikst0p.

You’ve been reading an excerpt from Unwinnable Monthly Issue 148.

That Night Steeped by Blood River

Hell is Other Shooters