There’s a scene in Matrix Resurrections where Niobe (Jada Pinkett Smith), sitting in her quarters alongside the newly re-freed Neo (Keanu Reeves), implores Neo to just . . . listen. Of course, there’s nothing to hear. That’s the point, she says; the Matrix, the film series’ proxy for contemporary life/dystopian Second Life clone, broadcasts so much noise into the minds and experiences of its victims/prisoners/players that silence itself can be an easy experience to forget. Silence is imagined, here, as a precious resource, an asset that has been taken from people who need it. Without silence, the scene implies, you’re trapped.

I’ve been thinking about how silence works in videogames, lately, and it’s all Halo‘s fault. Criticism of the Halo games has long been a stunted field, dominated by a single game design metaphor that is, so far as many people are concerned, all that really matters about the games. The story goes (I think there is a real material history here, but I’m a columnist, not a reporter) that a Bungie developer, or two, or three, explained Halo‘s combat system like this: See, the game’s combat is like a golden triangle. There’s your melee attack, your grenades and your guns. Combat is based, primarily, around the interplay between you and your opponents, as mediated by these three central pillars. Or something like that. I’m paraphrasing. But that’s the idea – whatever you add or subtract, Halo is fundamentally about these three elements, eternally remixed in what Bungie once called “thirty seconds of fun.” An emergent, thirty-second encounter, repeated, remixed, forever.

All valid, self-evidently true observations from the mouths of the developers themselves – but they’re observations that cause people to miss obvious, also-true facts about how Halo works, what it does and why what it does is beautiful. Let me explain by way of talking a bit about how my own broken brain works. I have attention deficit hyperactivity disorder, and one way that manifests for me is I’m extremely goal-driven, as a player of videogames (or any other activity), because goals light up the chronically under-stimulated reward center of my ill brain. I succeed, then I get the feelgood chemicals and I feel better, think better. It’s a self-medicating practice. This can be a problem, when playing certain videogames, because I get so hyperfocused on the goal-oriented big picture of a game that I blaze past significant portions of the side material, disrupting the mood, the tone. I just go from one stimulating part to another, then at the end I wonder why that experience felt so brief, so rushed, so stressful. 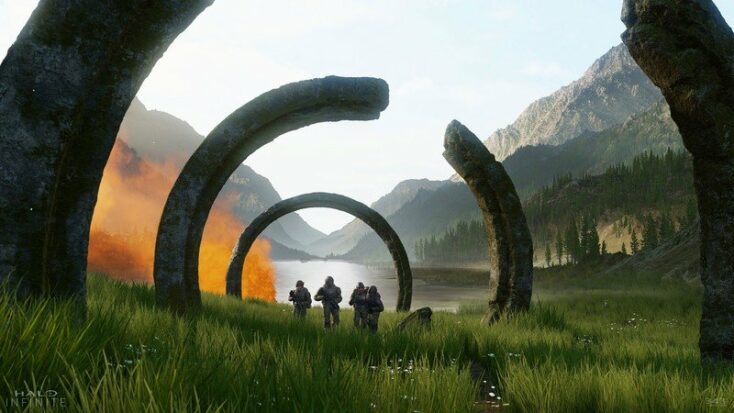 This happened to me, at first, when I started playing Halo: Infinite, a game whose campaign I found immediately enthralling. See, I love Halo, and a new game with a new narrative was a big deal to me. So, I started to rush through it, something Infinite, as an open-world title, freely let me do. I could sprint from mission to mission, encounter to encounter, and soak up all the sweet, sweet morsels of dialogue and authored encounter design that functioned, for me, as the biggest rewards of the experience. Except . . . I didn’t feel rewarded. Or, well, I did, but the high was marred by a growing sense of dissatisfaction. Things started to blend together. I felt disconnected from the lush environments of the new Halo ring I was exploring. The fights felt bad. I began to get angry at the experience. I realized, then, that if we’re going to play along with the overly limiting analytic framework of Halo‘s “golden triangle,” then we need to admit there’s at least one other element that needs to be talked about in conjunction with it. Silence.

Imagine the second mission of the original Halo game, called, well, “Halo.” If you’re not familiar with it, let me set the scene: you’ve just crash-landed on a giant artificial ringworld, a sci-fi superstructure you don’t understand and know next to nothing about. In the opening of the mission, you, playing as cyborg supersoldier Master Chief, emerge from an escape pod, your fellow space marines dead. You walk along sun-dappled hills, wilderness extending in every direction, including up, where you can see it fade into the base of the ring, which extends above and around you. As you advance, very little happens. A single enemy aircraft harasses you, and a small squad of enemies await you at the base of a nearby hill, but Master Chief’s slow walking, and the drama of the scenery, conspire to make your progress toward them slow. This trick repeats several more times in the mission, where you’re forced to drive from place to place across a large expanse of wilderness, saving small groups of marines as you go, but spending a meaningful amount of time just . . . looking around. Navigating. Experiencing this strange, fantastical, threatening, beautiful place. 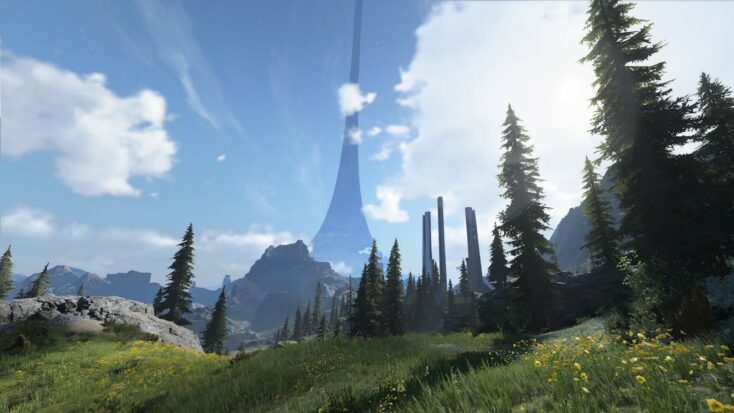 Silence introduces the capacity for wonder, and Halo: Infinite‘s semi-open-world design threatened to take that away for me. I was frustrated; I wish 343 Industries had done more to throttle my experience, introducing more empty space (that great triple-A gaming sin!) into the environment. I wanted to get lost. I wanted to be forced to get lost. I’m not measured enough to do it on my own.

Or, I wasn’t, anyway. I’ve been on new medication lately, and it’s helping. I have a bit more patience than I used to. So, I slowed down. Did the side objectives. Looked around, climbed mountains, tried to breathe this imaginary place in. And it came alive for me. Halo: Infinite takes place on a fractured, broken Halo ring, one that’s been destroyed by an unknown cataclysm. Parts of it are drifting apart from the rest, slowly falling into the void of space. The parts that are still intact are half-naked, the nature giving way to brutalist architecture and networks of pylons and communications beacons, the ring’s internal infrastructure revealed. Here and there, you can see hints of it healing itself – a flock of birds, young trees. An undisturbed lake, glistening in the sun.

Niobe was right, I think. Silence is a resource, one that ought to be appreciated, and used, and one that games like Halo need to remember it has access to. Silence generates beauty. It allows the opportunity for wonder. Silence sets you free.

Julie Muncy is a writer and poet living in Austin, Texas, with her wife and cat. She plays way too much Destiny 2.

On the Death of Samus Aran