Those familiar with my essay in Exploits last year on History Channel’s survival reality show, Alone, know that since the pandemic started, I’ve become a bit of a glutton for reality TV. My partner and I watch a wide array of shows from RuPaul’s Drag Race, Alone, Survivor, Are You The One?, The Circle, to name a few. In the past, I might have scoffed at the amount of reality television I watch today, but within this genre I’ve found many interesting layers to unpack.

After a recent watch of Willy Wonka and the Chocolate Factory, Netflix suggested one of their new reality shows, School of Chocolate. The premise of the show is Swiss-French pastry chef Amaury Guichon enlisting eight pro chefs to study the art of chocolate under his tutelage in a show that is part competition and part masterclass. Guichon has gained a large following from posting videos of his process creating elaborate chocolate sculptures on Instagram and TikTok.

Prior to watching the show, I’d come across his work in passing and it’s nothing short of incredible. Guichon has an eye for detail and an expertise in the science behind manipulating chocolate to create his creations. Everything from hanging chandeliers made of chocolate to small treasure chests with workable hinges and locks, Guichon is always outdoing himself.

The format of most competition shows is one that pits its contestants against one another in an ever-increasing gamut of challenges that test their metal until only one contestant is left. It’s a simple format that works. In shows like Chopped, The Great British Baking Show, Iron Chef and more, the audience is cast into an ever-changing role of rooting for whichever contestants remain. Your once-beloved favorite person on the show could easily vanish and you may be left rooting for their rival. It’s more of a passive viewing experience that rolls over you each week. 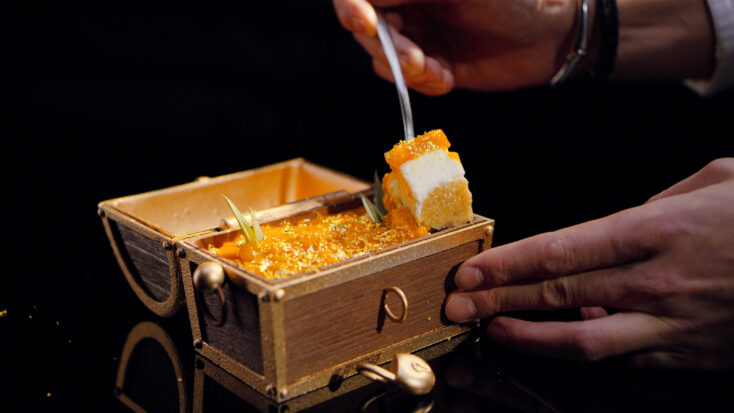 In School of Chocolate, they take a slightly different approach to competition shows that I admire. Each episode the eight contestants are taught a new skill by Guichon, anything from making a chocolate hinge to creating glossy coatings to give chocolate a shining sheen. During a preliminary challenge each contestant puts this new skill into practice leveraging their own expertise in relation to the challenge theme. Then, similar to turning in a test, Guichon grades them and chooses a winner(s). The two lowest scoring chefs don’t get to participate in the “showcase challenge” which often has contestants creating prodigious chocolate sculptures with a wide array of techniques. Instead, these contestants get a private lesson with Guichon in hopes that they can do better in the next episode.

What sets this competition apart, however, is that none of the contestants are eliminated at the end of each episode regardless of whether they are in the bottom or not. There is a cash prize waiting for one lucky winner by the end of the season, but by disallowing the possibility of elimination School of Chocolate unlocks greater stakes for its audience and its contestants. The tension of the show still revolves around winning but the drama shifts to focus on how learning new skills in any creative field is a humbling and vulnerable experience.

In the same way that The Great British Baking Show presents an otherwise to traditional competition shows by showcasing contestants who are willing to help one another succeed and have fun. School of Chocolate does as well by showing the emotional journey of people who excel at their craft but still have much to learn. Guichon is an excellent teacher who will step in during challenges to provide the chefs critiques and tips for succeeding. 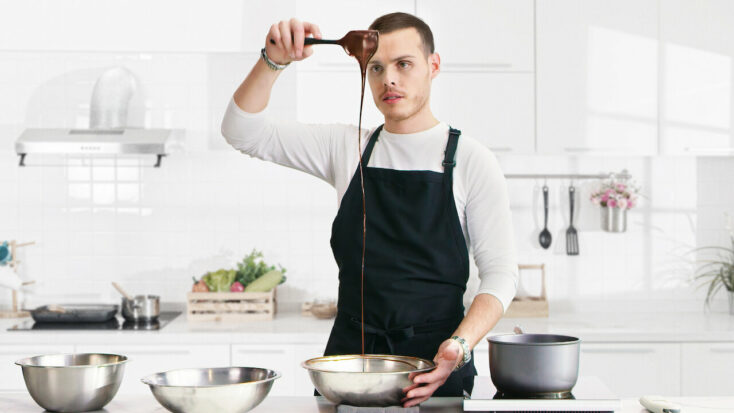 When this first happened during the show I was taken aback. It might seem antithetical for Guichon to step in and help them with the challenges, after all he’s the one who will be grading their creations. But what makes this angle interesting is it further builds his connections with the students and, in turn, when they stumble it’s much more of an emotional moment. The show captures the struggles that all creative people learning new skills must face. Failure hurts so much because it has less to do with the literal act not going as planned and more to do with how we perceive our failure as a reflection of ourselves. This is exacerbated when you have succeeded in your craft and have been able to make it a profession. If you’ve ever spent time in a workshop setting for any kind of craft, there’s a pressure to that environment that comes from how you imagine others perceive you, your successes and your mistakes.

American competition shows in general reflect the capitalist, dog-eat-dog reality that we navigate every day in this country. Within our systems it’s seldom rewarded to help another person and in order to rise another must not only fall but must be swallowed whole. But there is just as much drama to be found in showcasing the struggles of learning new things, collaborating with others who share the same passion as your own, and most importantly, in asking for help when you’re unsure, and School of Chocolate understands this.

While reality shows aren’t everyone’s cup of tea, I’ve been enjoying these detours in my normal viewing. At the very least, shows like School of Chocolate are helping me temper my own misgiving in learning new skills within my creative endeavors as well as helping others along to the finish line. This show presents a different kind of “reality,” one much more akin to how I navigate my own relationships to learning, competition and connecting with other creatives.