One of the first things a viewer might think when watching The Bear is just how similar it feels to the Safdie Brothers’ film Uncut Gems. They’re both chaotic, disorienting, claustrophobic and interested in how our own internal noise causes friction with the world and people we interact with on a daily basis. How, for most of us, life is hard not only because living is hard, but also because very few of us are good at actually saying what’s on our minds.

The television series follows a young chef named Carmen (or “Carmy” as he’s often called in the series) who has risen the ranks of the culinary world to work at some of the world’s best restaurants. Shortly before the series opens, Carmy is forced to return home to run his family’s Italian beef sandwich shop after his brother died by suicide. After hiring a young up-and-coming chef named Sydney to be his sous-chef, the duo attempts to create a different kind of restaurant than the decaying restaurant Carmy has inherited.

The series depicts the various ways Carmy attempts to keep the business afloat while navigating his own trauma, his relationship to his family, and the varied circumstances of the kitchen staff he’s forced to lead. The show sidesteps the triumphant narratives you might associate with its premise. This isn’t a story about a white male savior revitalizing a dying restaurant and showing his largely Black and brown staff the power of friendship and hard work. Carmy, just like the rest of his kitchen staff, is a man grappling with immense loss, and years of trauma not only from his own upbringing, but also the various workplaces he’s spent the majority of his time in to survive.

The Bear succeeds for a variety of reasons, but what strikes me most is that it isn’t a show interested in questions like: “how does one get over the death of a family member?” or “why did my loved one take their own life?” As Alex Sch says in his eloquent video essay, this is a show about the traumas that our previous workplaces, managers and family members imprint on us and the struggles we face not only in trying to overcome them ourselves, but also create another way, a different system to break the chain that forever replicates the damaging environments that retraumatize us over and over again.

Similar to Uncut Gems, a key differentiator with The Bear is it’s editing and sound design. The show doesn’t linger long on any given moment, even the most dramatic of scenes are often cut short, left ambiguous, or interrupted by another plot element being thrown into the mix. In this way, the direction of the show seems to be interested in just how messy human connection can be, how our most impactful moments in life actually resonate because they are times where we’re able to make ourselves heard above all of our world’s noise. 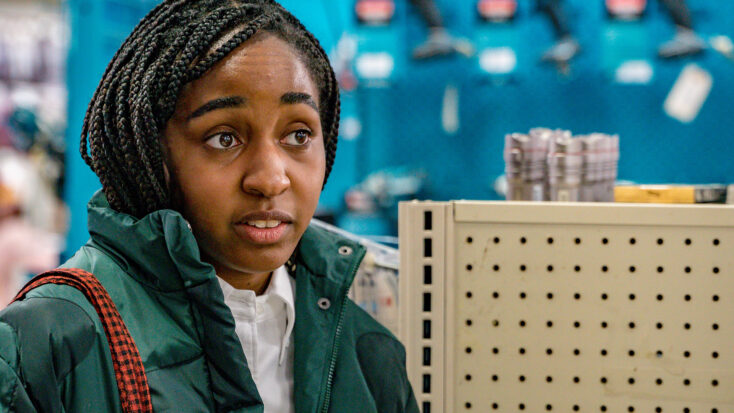 Diegetic sound becomes a key character in scenes with variable sound mixing that often puts the kitchen clamor at odds with the character dialogue. The characters’ interior lives become an element of dissonance and interference as they move through their realities. Carmy’s nightmares interrupt not only how he navigates the world, but also the flow of the show itself. Instead of telling the viewer how to feel about all the static buzzing behind the character’s ears, we’re left to come to our own conclusions about what it all means.

This kind of editing makes the character relationships feel more dynamic. Seldomly do Carmy and his crew resolve conflicts completely in the moment, emotions bubble over like an unwatched pot of pasta, and the characters are often ill-equipped to tackle their issues head-on. The Bear understands that people rarely say exactly how they feel, and that maybe it’s even part of the human condition to get our lines a little crossed, to talk past each other in hopes that we align on the same frequency, if only for a moment.

Carmy and Sydney “get” each other on a molecular level. They both are highly skilled chefs who have complex relationships to food. They’re loners, prodigies even, but where they find connection in the dishes they create, they also find isolation from those around them who don’t aspire to the same levels of greatness as they do. These similarities bring the duo together, but also cause friction as Carmy must navigate being a practical restaurant owner who – to the restaurant’s detriment – is trying to uphold some of the core systems that formed The Beef’s identity.

While we’re given glimpses of her own struggles climbing the restaurant ladder, Sydney, is still a young chef cutting her teeth in the industry. Unlike Carmy who has become jaded from his years in high-end dining, Sydney is still willing to ask: why are we doing things this way? Why must we replicate these systems that destroy us? 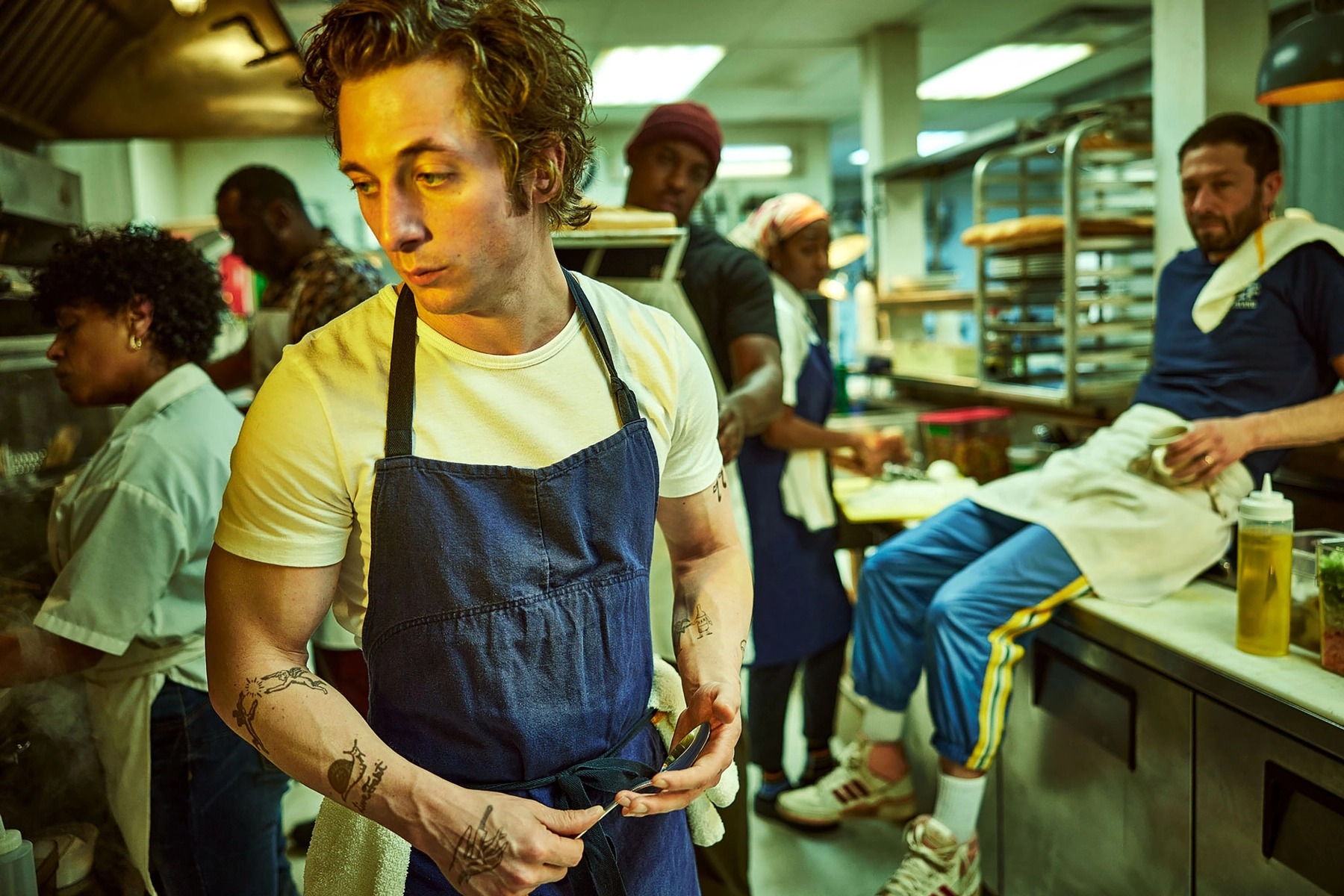 Sydney has yet to be torn down enough to give up on magical thinking all together. Carmy on the other hand is representative of many people my age, people who are in their 30s and have been beaten down by the oppressive systems that govern our lives. While many of us still resist and want for more, there’s a prickly voice in the back of our heads making us wonder if another way is even possible anymore. With each new idea that Sydney brings to the table to make the restaurant a better place, Carmy is forced to grapple with what it actually means to do things differently.

Throughout most of the series, however, Carmy fails at seeing the value in Sydney’s ideas. He regresses back to archetypes that he’s experienced in previous kitchens, even the systems that traumatized him in the past seem like better implementations to him than trying something new. This is why capitalism is so insidious. This is always a tension for any form of activism or counterculture thinking isn’t it? It’s easier for most of us to fall back on the mechanisms we know “work,” even to our detriment.

Outside of all the main elements of the show around suicide, I find the connection that Carmy and Sydney have to be the heart of the show. Specifically, the strained relationship they share in trying to change The Beef into a restaurant that’s more than just a dive slowly eating them whole.

From the beginning of the show The Bear presents the viewer with a smoking gun in the form of a letter left to Carmy from his brother. For the rest of the series, you’re left to wonder when Carmy will find it and how he’ll respond to whatever message is inside. 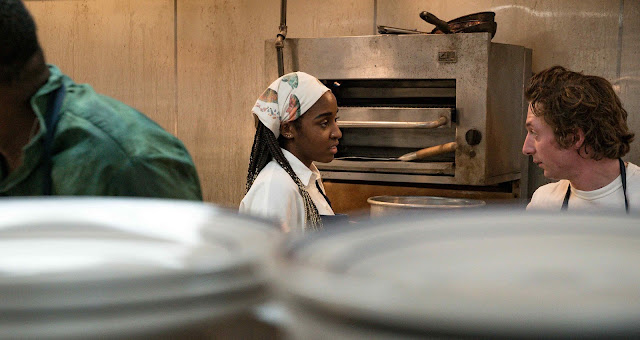 After the most stressful episode of the season which shows The Beef rapidly spiral out of control after Carmy takes Sydney’s advice and opens up online ordering, we see Carmy become the very monster that haunts him in his nightmares – a toxic boss who runs his restaurant through anger and belittlement. Carmy’s outburst that day sends a shockwave through the restaurant causing Sydney, as well as other members of his staff to quit. Shortly after this blow up (in the final episode) is when Carmy is given the letter from his brother.

There’s a weight to the moments that follows, you can feel the terror and aguish Carmy feels in receiving the letter. He takes a break and steps out into the alley outside the restaurant. The noise of the kitchen falls away and we are left in silence. Despite the deadening quiet, we know that Carmy’s world is louder in this moment than it’s ever been. So loud that he might throw up, so loud that he may not be able to read the letter, so loud that it might consume him all together.

It’s at this moment that he texts the only person he knows will understand him. Sydney. Carmy doesn’t text Sydney asking for advice or to tell her that he found a letter from his brother or even that he needs support at this moment. Instead, he texts her that a dish she’s been concepting needs a bit of acid. In the prior episode, Carmy fucked up so bad with Sydney that you’re left wondering if they’ll ever be able to reconcile. This acknowledgement is a way for him to rise above all of the racket happening in his head, to ground and recenter himself in this moment of intense emotion. It’s also a moment for him to say, “I see you,” in the only way he can muster.

So much of our lives are spent throwing darts into the abyss and hoping they land on target. Human communication is challenging, messy and downright ugly most of the time, but that doesn’t mean we shouldn’t try. Carmy and Sydney’s fight has nothing to do with this letter, but what The Bear understands is that all of these things are interfacing at the same time. That we’re never able to fully remove ourselves from the noise of our lives, but maybe we can rise just above it, if only for a moment.

The More the Merrier: Two Robin Hoods from Hammer Films