Based on its box art, Concrete Genie looks like an unassuming title about a boy who paints colorful characters on the sides of buildings. That isn’t an entirely inaccurate interpretation either; it’s literally the basic premise of the game, which plays something like a more family-friendly inFamous with gyroscopic painting mechanics. It’s an easy game that places a premium on creative expression and emotional resonance over hardcore difficulty or gritty realism, and it wraps itself up in a brisk five to six hours.

Beneath the surface though, Concrete Genie offers surprisingly sharp commentary on the pain and politics of isolation. It is, at heart, a story about dealing with bullies. But it digs deeper to root out sources of misery that tear people apart from one another and arrives at some moving conclusions. And at a time when loneliness has become an ever-present state of being, it might be the perfect game for our present moment.

Concrete Genie takes place in the fictional seaside port town of Denska. After an offshore oil spill decimates local industries, the population starts to dwindle, and its prospects for the future turn bleak. Kids roam the streets looking for things to smash while rusted equipment sits unused, serving as a decaying reminder of what once was.

To make matters worse, a mysterious substance called darkness begins to envelope the town. It’s a thick black ooze that blocks entrances to new areas until it’s cleared away, a physical manifestation of the despair that permeates what’s left of the town.

The game puts players in the shoes of Ash, a young artistic outsider who spends most of his time drawing. When a group of kids steal his sketchbook and ship him off to an old lighthouse tower via railcar, he serendipitously meets a genie named Luna, who hands him a magical paint brush that can both breathe life into its holder’s creations and clear away the darkness that is slowly rotting Denska inside and out.

Ash then sets off to recover the torn pages from his stolen sketchbook, add some color to the town and clean up what remains of the community. Even with no other friends or allies to defend him from the ruffians roaming Denska’s streets and alleyways, he makes his own friends by painting genies on walls. They’re able to help him solve simple puzzles, play games and generally offer some companionship. 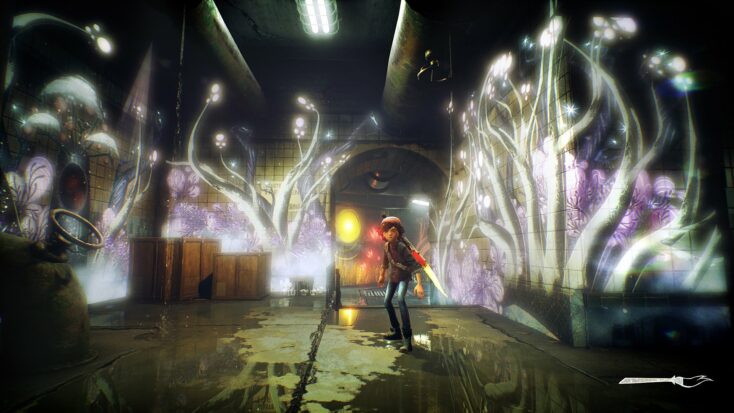 As the story develops, we learn that Ash comes from a home with divorced parents. It turns out so did many of his bullies, who, lacking better creative outlets for their frustrations, found him to be an easy target. He could use his brush to go on a revenge tour against his tormentors. Instead, he chooses nonviolent resistance and eventually saves them from an evil force they’ll have to work together to stop.

It’s a plot more fit for a Dreamworks movie than typical first-party PlayStation fare. Yet it reveals its depth in the way it slowly unspools how ecological and economic malaise trickled all the way down to the family level, which is, perhaps, the real source of where everything went wrong. When everything the people depended on disappeared, not due to market forces but because of corporate negligence, it ripped Denska apart. There’s nothing left for the kids to do other than disrespect their abandoned surroundings.

Concrete Genie uses newspapers strewn around town to offer details that fill in the backstory behind Denska’s decline into a ghost town. While we learn early on that an offshore oil spill is what sent the town’s economy into a tailspin, this expository reporting dives deeper into the details around exactly how it hollowed out the community. There were no meaningful consequences for those responsible, at least none that these papers seem to reveal. That much almost feels too on point.

Ash doesn’t single-handedly lead an economic turnaround with his paintbrush and a positive attitude. But the idea that public art (which is essentially what he’s creating when he paints over urban decay) can improve quality of life and beautify blighted areas and improve people’s quality of life is one rooted in real-world applications.

Even though its benefits are commonly misunderstood, according to the Center for Active Design, “prioritizing public art can lead to increased levels of community engagement and social cohesion.” Successful examples of this include Power House Productions in Detroit and the Porch Light Program in Philadelphia, which a two-year Yale study showed improved health outcomes and reduce stigma around mental health issues. While it isn’t clear whether those sorts of projects had any actual influence on the game’s creators, the parallels appear present and may have some lessons for us.

Concrete Genie’s narrative structure isn’t that deep nor subtle; this is, after all, a game that’s meant to be comprehensible by children. But there is something almost powerful about how it weaves its themes together – environmental destruction, economic instability, the death of community at the hands of unfettered capitalism – in a way that is easy to follow. It connects the personal to the political in a way that genuinely resonates, but without ever losing its lighthearted charm, or taking itself too seriously.

That’s a difficult balance to strike, and for the most part, it succeeds. Making tough topics accessible is not to its detriment, but rather, a strength when considering the audience.

It’s a shame that Concrete Genie didn’t find a larger audience. While it was well-reviewed upon release back in October 2019, it had disappeared from the sales charts by the following month, overshadowed by big-budget shooters. There are certainly grittier and more “grown up” games one can choose.

But there are also perhaps none that so effectively make pervasively bleak circumstances feel a little less overbearing, all while speaking to a younger audience that often understands more than they’re given credit for. Whatever the sales figures show, this was a worthwhile endeavor for Sony and in-house studio PixelOpus, if for that reason alone. Here’s hoping for a sequel.

Broke My Golden Rule of Gaming. Here’s What Happened Next.