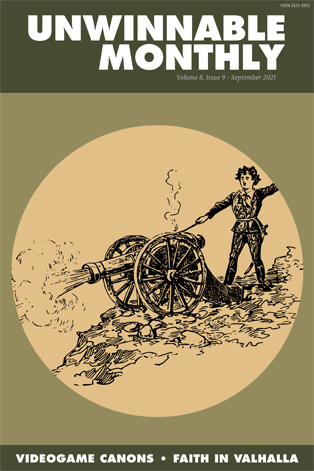 In My Time at Portia, an RPG/sim from Pathea Games, you plant crops, make friends, go on dates and occasionally fight machines or giant rats. PlayStation doesn’t make it easy to check your hours logged, but I would guess that I played Portia for about one million hours, and many of those hours were spent deciding who I wanted to marry.

The town of Portia is a friendly place in a post-apocalyptic future, located on the ruins of a city once known as “Dubei.” In the Portian mythos, machines destroyed much of humanity hundreds of years ago, plunging humanity into an “Age of Darkness.” Two hundred years passed. Then, a legendary figure brought light back to the world. Our story takes place roughly one hundred years after the light returns, in a fairly well-functioning society, so I wouldn’t call Portia a dystopia, exactly, but maybe a post-dystopia.

Enter me, a hotshot young builder eager to prove myself in this frontier town. My trash dad left me an abandoned shack with a workbench, which signaled that it was time for me to move in and meet the locals.

The first family of Portia comprises the mayor and his two adult children: Ginger and Gust. Ginger and Gust are clearly the Portian Kennedys. Gust is a Mr. Darcy-type, handsome, arrogant, and overprotective of his sister. Ginger is a classic fainting heroine: she has a mysterious condition that does not allow her to stand in bright sunlight or eat spicy foods (canonically, she is not a vampire, although I have questions). She wears a long, high-collared pink-and-white prairie dress. She is anti-materialistic, making it very difficult to woo her with gifts (unlike the other dateable characters). This makes her the game’s ultimate romantic “get”: a character whose affection is nearly impossible to buy, and thus extremely time-consuming to gain. As a chronically underachieving protagonist of dating sims (see: Monster Prom and Monster Camp), you can imagine my frustration with Ginger’s refusal to be swayed by my offerings of gemstones and fancy relics.

When I first propose to Ginger, she wants to marry me, but says that I have to get permission from her father, brother, and “uncle” (the family’s butler). This is . . . weird. It’s weird, right? Fitzwilliam and Georgiana Darcy indeed.

But I still want to marry her, so I talk to her dad. He has some quests; I do them. I talk to her “uncle.” He asks questions about Ginger’s proclivities; I answer them correctly. I talk to her brother. He insists I make my house as fancy as possible; I spend my hard-earned money and do it. After my labors are complete, Ginger walks – with mincing steps – to my house one twilit evening to tell me how happy she is. 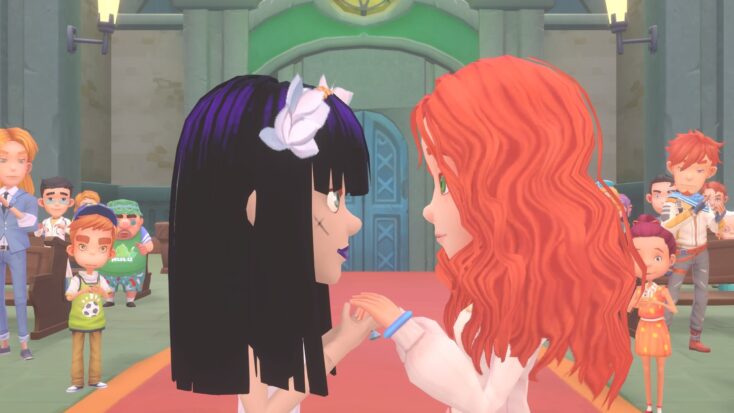 I put on my wedding dress (“a beautiful dress representing purity. Finely made and for important occasions”) and we marry at the Church of Light, on top of a hill overlooking the ruins. It’s beautiful. We pose for screenshots. We move into my house with my pets and my llama stable and my marble courtyard chairs and matching marble fountain.

But I feel weird about the situation.

It’s probably some combination of the above, but her high-necked prairie dress is a big contender (if you’ve read this column before, you know how strongly I feel about character outfits).  I don’t believe I chose Ginger because of her family’s Victorian morals (I didn’t know I’d be assigned Herculean labors when I proposed).

My initial response is to be frustrated by this seeming failure of imagination, especially for such a quirky, upbeat sci-fi narrative: to imagine that humanity has survived so much suffering and hardship, and still wants its “ultimate romantic get” female character to be a woman who will only marry the person she likes if her male family members approve.

My secondary response, however, is that this may not be a failure of the imagination at all. Many of Portia’s other female residents are warriors, business owners, and scientists (all of whom can consent to marriage without others’ approval). And the longer I think about the situation, the more I realize it’s incredibly easy for me to believe that humanity could survive an apocalypse and two hundred years of darkness and one hundred years of rebuilding and still have tendrils of the patriarchy snaking up through society’s wealthiest and most well-connected families. That may be more likely than whatever idealistic nonsense I was envisioning before. 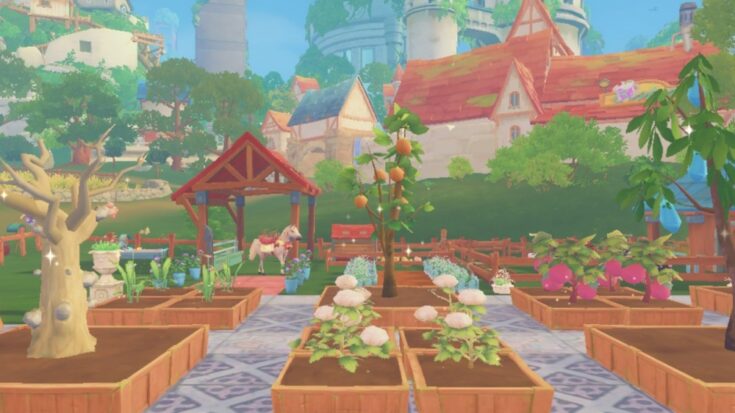 I think, literally all the time, about this line from a 2014 essay by Kylee Luce: “it’s difficult to picture what a ‘huge feminist victory’ might actually look like and I think I’ll just go to sleep, I’m so tired, someone wake me up in a hundred years.”

Someone wake me up in three hundred years.

Anyway, I’m depressed now. At least I can go sit in my marble courtyard chairs and cry into my marble fountain next to my anti-materialistic wife.

My Time at Portia