I’ve always felt a quiet panic upon the ending of things. It’s not the conclusion that gets me though, it’s the reality that the world – my story – keeps on ticking, indifferent to the events that have just occurred. I recall this dreadful feeling so acutely upon finishing a month-long cross-country road trip I took with three friends to gather material for a podcast we were working on. We received a warm welcome – a celebration even – when we returned home from that adventure. But eventually, the praise evaporated, the drinks dried up and I was left with that agonizing question that everyone must grapple with at some point in their life: what happens next?

Kanehito Yamada’s latest ongoing manga Sousou no Frieren (roughly translated to Frieren: Beyond Journey’s End) has got me thinking a lot about time, endings and the value of stillness. The story starts where most fantasy tales conclude. A party of heroes – a dwarf, two humans, and an elf – have vanquished the Demon King and brought peace to the land. But life must go on, there is no “happily ever after.” The opening frames of the manga showcase the party in the back of a wagon reveling in their accomplishments while also musing about going back to normal life. Himmel, the human warrior that led the party to conquer the Demon King shrugs about having to find a job before turning to Frieren, the near-immortal elf mage of the group, and saying, “Your future is beyond my imagination. It will be a very long life.”

Frieren replies, “I guess so.”

At its heart, Sousou no Frieren is a story about grief, coming to terms with the ending of things, and finding your purpose in life no matter how big or small it might seem to be. By placing the perspective of the story through the eyes of a Frieren, Yamada reveals the ways in which time affects our perception of our accomplishments, our relationships, and our daily routines. For Frieren, she has seemingly all the time in the world and, in turn, revels in food, reading books and sleeping in while her human companions stress about how much time they’re wasting.

That podcast road trip I took is the perfect microcosm to encapsulate this problem I have of always thinking ahead – of never being present. It was an experience that most people on this Earth will never have and yet I didn’t take much time to ever acknowledge how special that adventure was. This lack of presentness has extended into my late 20s and has quickly become my new foe to conquer. 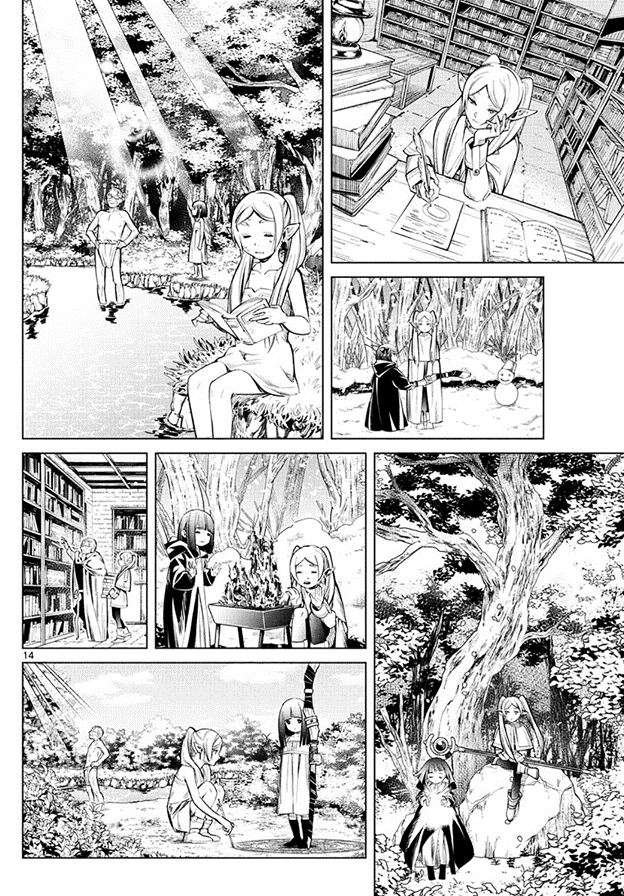 Maybe this is simply a problem fostered by the ever-present gaslighting and precarity that is academic life (I spent 10 years in college across a BA, MA, and MFA, 4.5 years of which I taught). Or maybe it’s a just a burden all creative folks grapple with. Whatever the case, I’m always looking for the next thing before the current thing is finished. Hell, without even the thought that maybe it doesn’t need to finish. It’s never been easy for me to appreciate what I have done.

Within Frieren’s character, I see myself through shards of a broken mirror. In one shard, Frieren’s, “I guess so” takes on the weight of indifference I feel toward finishing my own creative work, my own metaphorical adventures to conquer the Demon King. In another shard, I see a possibility, a different version of me – slightly distorted or maybe just recentered – that takes comfort in taking their time, that is okay with sitting in a moment.

What makes Sousou no Frieren shine is its resistance toward classic fantasy tropes propagated by work such as Joseph Campbell’s monomyth The Hero’s Journey. At its heart, Campbell’s template creates an “if, then” statement about the nature of the human experience, hardship and mythmaking. If the hero is faced with X experiences, then they will be changed and transformed by overcoming them. But that’s simply not true for a lot of major events in life. Unfortunately, meaning doesn’t apparate simply because a task is finished. Once we close the books, it’s up to us to determine what we got out of our experiences.

Time in the manga passes at a rapid pace, multiple years can go by on a single page without one lick of dialogue to be found. And through the comic panels, we are provided a gateway to understanding how Frieren perceives time and experience. What started as an alienating element of the narrative for me has quickly become one of my favorite rhetorical devices that it deploys.

This emphasis on how time affects perception also becomes the driving force of conflict in the series. While there are fight sequences throughout the story, the actual action itself is never the thrust of the dramatic tension. Instead, Yamada’s storytelling looks at how time can be a blade that cuts deep into the fabric of the human experience. Through the elongation and condensation of time Yamada presents a rumination on how time and distance from an event can bring clarity or obscure it all together. 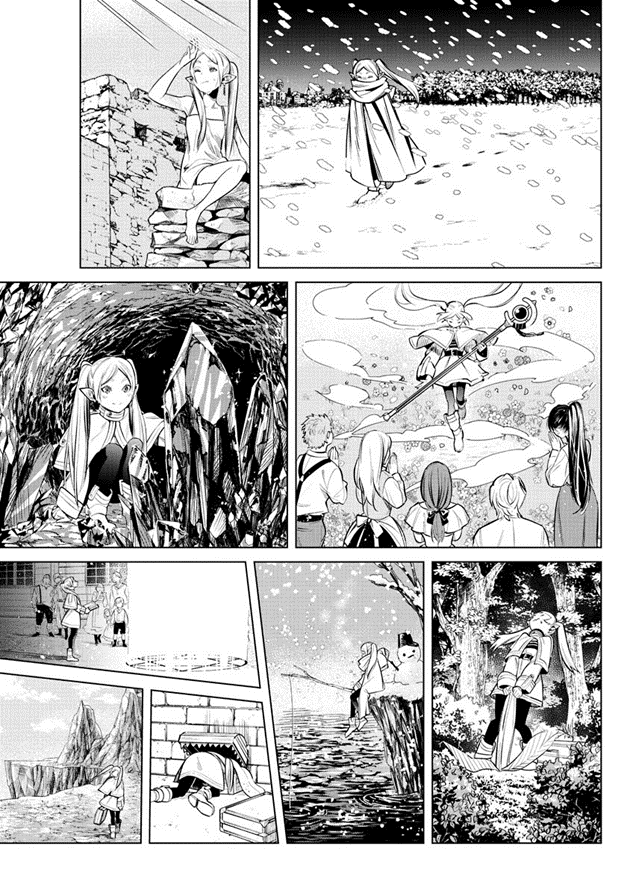 And like many great stories do, Frieren isn’t afraid to come to the conclusion that maybe both are true. In my own life, I’ve learned that tends to be the case. In the pursuit of the meaning, I’m always struck by what I feel I’ve lost and how what I’ve found through that loss morphs into exactly what I needed. Maybe that’s just the resilience of the human spirit, or a way for our brains to trick us into moving forward again. Either way, I don’t mind.

In the first chapter of the manga Himmel passes away after a long fulfilling life. It’s a surprising moment, but what follows speaks to why I love the manga so much.

A grand send off is held in Himmel’s honor, everyone from the town comes out to see him, and of course Frieren and the rest of his compatriots are there too. As the ceremony comes to an end, Yamada points us to someone in the audience who is taken aback by Frieren’s response to the funeral.

“Isn’t she his friend? She doesn’t look sad at all.”

It’s a moment that points to the different way we all grieve, but more importantly Frieren’s response to this observation is the catalyst for the entire adventure. 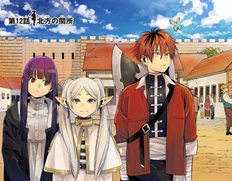 “I don’t know this person well…We only traveled for 10 years, that’s all.” She cries.

This moment pushes Frieren to learn more about the lives of humans, and what it means to be in the moment. It’s a breakout scene that establishes her unique point of view and also an alternative to the “immortality is a curse” narrative. What follows is a tale not about revenge or conquest, nor completing a journey in pursuit of knowledge, but instead, a drive toward introspection and learning more about oneself through simply living more in the present.

Campbell’s experiential checklist presents a denial to ever take a moment to rest, to reframe, or even to turn back and look again.

I find hope in Sousou no Frieren because in the wake of the ending of things it doesn’t simply say that there are opportunities to be had. Instead, it’s helped me realize that when I remove myself from these never-ending markers, I open up the capacity to break this loop, to live more in the now and see what’s always been right in front of me, a life worth living simply because I am.