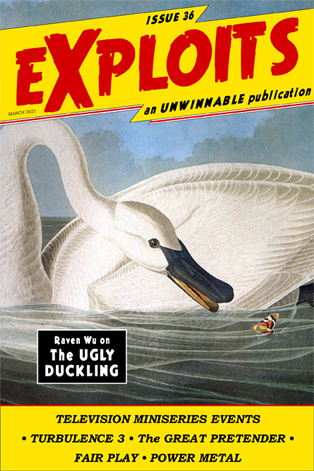 This is a reprint of a feature essay from Issue #36 of Exploits, our collaborative cultural diary in magazine form. If you like what you see, buy it now for $2, or subscribe to never miss an issue (note: Exploits is always free for subscribers of Unwinnable Monthly).

Hans Christian Anderson’s “The Ugly Duckling” is a beloved fairy tale known to most anyone you could ask, a story about an underdog (so to speak) who’s hard not to cheer for. But it’s worth stopping to think about the allegories we take for granted. Does the message of “The Ugly Duckling” really convey a lesson we want to teach our kids?

Examined more closely, the titular character is a dismal role model who spends the entirety of the story wallowing in self-denigration and whose happy ending is not earned, but simply occurs after sufficient time has passed. The story thus espouses a dubious, deterministic worldview that can incite only apathy. After all, nothing the ugly duckling does or does not do matters. He is fated to suffer, then fated to become happy. And it only gets worse from there.

“It matters little to be born in a duck-yard when one comes from a swan’s egg!” The text proclaims triumphantly at the end of the story (in the somewhat recent Pook Press edition at least, which can be read online here), in another display of jarringly outdated attitudes. And by championing nature over nurture and the inherent superiority of certain species over others, the text draws deeply worrying parallels with social Darwinist rationalizations of racial inequality.

The story also flies in the face of popular wisdom such as “Don’t judge a book by its cover” and “It’s what’s on the inside that matters.”  The ugly duckling is never able to overcome the discrimination towards his unattractive exterior through strength of character, nor is it possible for him to attain happiness without transforming into a beautiful swan. The duckling’s value seems inextricably tied to “what’s on the outside.”

Ultimately it cannot be said that the ugly duckling is a protagonist deserving of our admiration. In fact, he hardly qualifies for the label of “protagonist” in the first place, possessing no agency throughout the story. Combined with its highly problematic messages, this charming and seemingly benign children’s tale reveals itself to be anything but. So as valuable as our cultural traditions are, perhaps it’s time to update our bedtime stories with more fairy tales containing more contemporary values.

The Stiff Brown Cloth in Which the Knife is Kept

We Found Love in a Chatless Place: Community through Silent Multiplayer