Hidden in one of the many nooks of Hollownest is a persistent little bug named Myla, who chips and chips away at a crystal vein buried within the nearby wall. She sings a creepy ditty to herself as she swings her tiny pickaxe:

“Bury my mother, pale and slight, bury my father, eyes shut tight! Bury my sisters, two by two, and then when you’re done, let’s bury me too!”

Like many of the bugs of Hollow Knight, Myla stands rooted to the site of her eventual demise. It’s only fitting then, that she sings her own eulogy too. But she does so cheerfully, and is friendly to you when you first meet her. She’s steadfastly optimistic that something worthwhile, something irresistibly compelling lies buried beneath her feet. When you come across Myla in later encounters, some of that friendliness is gone, the single-minded focus on mining replaces the softer contours of her personality. Eventually, even that disappears, and she becomes, like so many of Hollownest’s denizens, another mindless husk, hollowed out by the infection that eats invisibly away at the minds of the bugs who remain here. She keeps on digging, though. The task which was once a cherished passion, has now been reduced to mindless compulsion, she digs without reason or motivation. In Myla’s empty swings, reflections of your own, often aimless, pokes and stabs at the deep and twisted spaces of Hollownest can be glimpsed.

In the inverse of Myla, who transforms from a fully formed character into an empty-eyed husk, your knight was designed from the start to be a creature devoid of will, and only develops an identity after exploring and methodically mapping out every last corner of Hollownest. Hollow Knight expects you to find joy in the incessant wandering, too, to happily engage with the seemingly Sisyphean task of conquering its long-abandoned ruins; to poke at cracks, to pop open the moldy shells of long dead bugs, to exchange blows with mindless creatures stuck in their wind-up choreographies. To learn their stories, and gain one of your own, in turn. 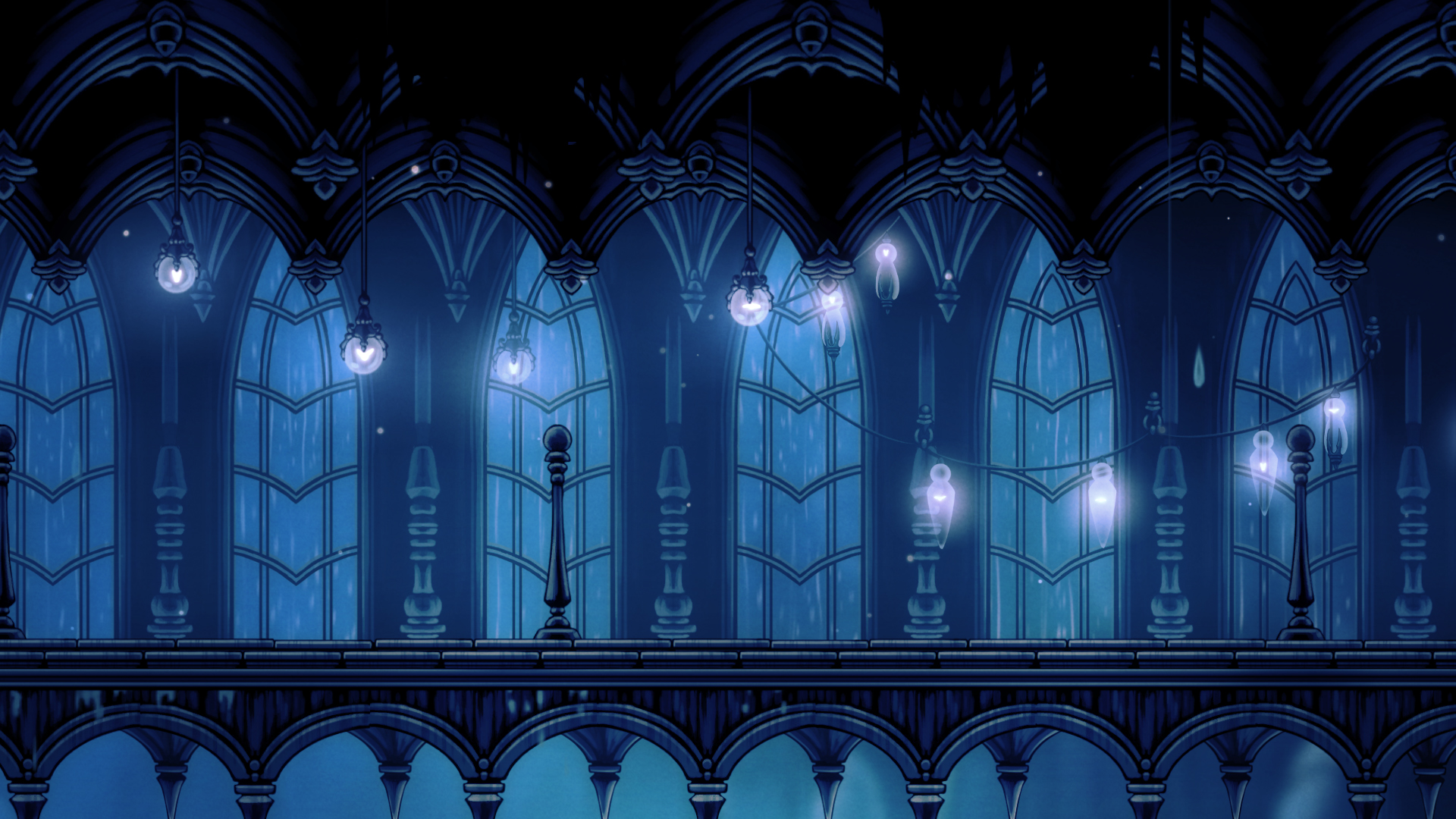 As your knight explores, they uncover countless examples of a world repeating its last moments, without cause or understanding: the hidden and forgotten past trailing behind an unchanging present. There’s the Arena of Fools, an ancient dusty pit where warriors fight under the unseeing gaze of a long dead ruler. Even without the apparatus of power to guide it, the Arena continues to operate, a site for fools to find violent glory, if not any external sense of purpose or meaning. There’s the City of Tears, with its ghostly buildings hidden in the fog, full of infected nobles, hoarding treasures no one wants. Water rains down from above, and few in the city remember when it began, nor are they aware of the massive lake which is its source. Elsewhere, the Mantis tribe sits on their thrones, maintaining a permanent martial readiness and defending Hollownest against the monstrous hordes surging out from nearby Deepnest, honoring their ages old agreement with Hollownest’s king, even though he is long dead and only lives in memory.

Everywhere you travel in Hollow Knight, you encounter scenes of loss and emptiness. It is a ruined world, whose crumbling silhouette suggests the ghostly absence of a greater empire. Only the empire’s brittle shell remains to be chipped away at. Like Myla’s crystal vein, it beckons, with promises of treasure and adventure and death and the abyss’ unyielding embrace. You don’t know, at first, why you’re digging deeper into this dusty ruin, and perhaps you never will. But you are driven, somehow, to continue, to drop down perilous shafts, to smash through walls and floors and crack open doors, until you are faced, eventually, with the cavernous emptiness within.

A character you run into frequently is Zote, a diminutive little fighter, with a brusque attitude and an oversized ego. After you defeat him handily in the Arena of Fools, he returns to the village of Dirtmouth where he regales the innocent young Bretta with false tales of his bravery and your knight’s treacherousness. Using the Dream Nail, which allows you to dive into the dreams of other bugs, you can enter Bretta’s fantasy, spun from Zote’s outsized braggadocio. Within the dream, you fight successively more difficult and impressive incarnations of Zote, as he appears to Bretta’s imagination. Once you’ve defeated enough of them however, the shades fall from Bretta’s eyes, the facade disintegrates and she finally sees him for the pitiful creature that he is. She departs Dirtmouth and Hollownest, headed out on her own adventure, perhaps to build a more honest and authentic dream; something with substance, with a future. Nothing at all like the empty, long-dead world she leaves behind (along with an oblivious, babbling Zote). 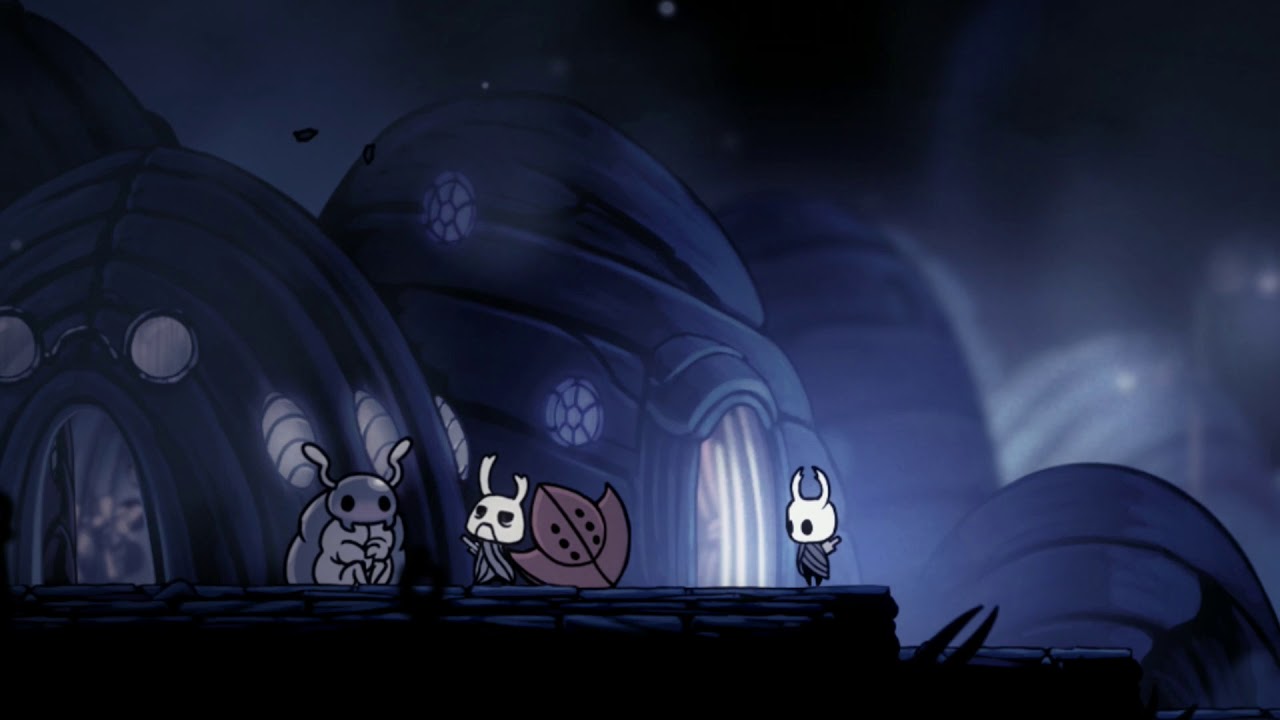 One of Hollow Knight’s more memorable characters is Quirrell. Quirrel is a warrior who once served under Monomon, one of Hollownest’s dreamers, the trio of powerful beings who agree to spend an eternity restraining Hollownest’s burgeoning infection. Quirrel originally left Hollownest behind and much of his own memories with it, but when Monomon, seeing the infection escaping its bounds, calls him back to dismantle her protections, he returns. Like the knight, Quirrel has little understanding of his true purpose. He wonders at the sight of Hollownest, without his memories, seeing it once again, as if for the first time. Despite his confusion, he succeeds in helping the knight gain access to Monomon, cocooned within her dream. His role fulfilled, helping the knight dismantle Hollownest’s moldering remains so that a new future might be built, he appears, one final time, on the shores of the massive Blue Lake which drips down into the City of Tears far below. He is grateful he was able to return to Hollownest and witness its glory, ruined and abandoned as it now is. To Quirrel, it is still beautiful: “All tragedy erased. I see only wonders…”

By visiting Hollownest’s remains, picking through its crevices and cobwebbed corners, your knight comes face to face with the many fragments of that tragedy, and proceeds to pierce them all with their tiny nail. Infection and violence spill out, the old oppressive systems lashing out and defending themselves. But your knight presses on, for no other reason than for the glory of the fight, of nail against claw, of abyss and light striking out together in mindless fury, breaking apart the stone walls around it, ripping apart the chains and the rigging holding Hollownest’s surviving vestiges in place.

And when you’ve pushed through, punctured the hard chitin walls, all that is left is to sit with the empty, if peaceful, nothingness which waits on the other side. Like the king’s lifeless corpse, sitting stiff on his throne, all the challenges you face are merely a facade, to be shoved thoughtlessly aside. When you come across it, you can sit on that throne, and reflect for a spell on what it may once have represented, before the dream which contains it vanishes for good and your knight must push on and dig in another direction.

The Number of the Beast, Side A