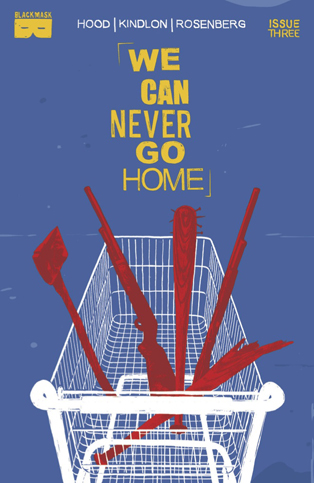 We Can Never Go Home is quickly becoming one of my favorite comics this year. It has interesting characters, well-paced storytelling and mixtapes. In two issues, the creators introduced Maddie and Duncan, two suburban teens in the 1980s who accidentally kill Duncan’s abusive father and put them on the run. The hook? Maddie has super strength and Duncan says he can kill people with his mind (he also stole his father’s gun).

Rosenberg, Kindlon and Hood create characters that feel like real teenagers. Maddie and Duncan are smart kids that have that piss and vinegar “us against the world” attitude – but they’re still kids. They do dumb teenage things like awkwardly blurt out a crush has a perfect body or forget to grab a bag full of cash in a firefight.

This issue picks up right where number two left off. Madison and Duncan are getting their bearings in a fleabag hotel. Just when they think they can breathe, the cops show up. Maddie and Duncan’s showdown with the police goes about as well as can be expected. Maddie and Duncan escape sans cash or Maddie’s clothes (but Duncan made sure to grab Maddie’s toothbrush). See? Dumb teenagers!

Maddie and Dannie recoup at a department store, spending the rest of their cash on getting Duncan cleaned up and looking for Maddie’s superhero costume. There’s a pretty great montage that shows how ridiculous so many female superhero costumes are. It’s a light moment in a pretty heavy comic. I mean, these kids are wanted for two murders at this point and are on the verge of planning to rob another drug dealer.

What makes We Can Never Go Home such a compelling comic is Rosenberg, Kindlon and Hood’s willingness to explore likeable characters doing evil things. So far, Maddie’s been the conscience of the two – she genuinely felt terrible about killing Duncan’s dad, but she also let the less morally conflicted Duncan talk her into going on the run. I’m fairly certain Duncan is a psychopath, but he also seems to genuinely care for Maddie. I’m looking forward to following these two, no matter how murky their predicaments or how dark their choices get. 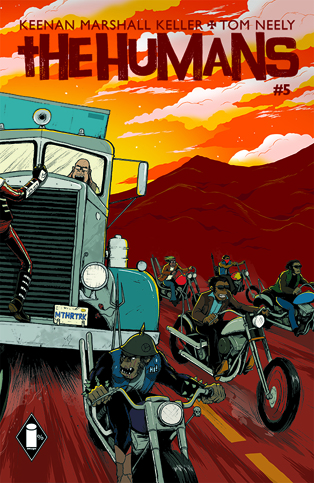 The Humans return after a four month hiatus in rip-snortin’ fashion.  Stakes are higher than ever on the big “Spazm” drug run, and there’s more than a little blood, guts and gore.  Not for the faint of heart, not at all.  Issue #5 clocks in at 28 pages, cutting back on the miscellaneous bonus fan letter pages, but to make up for it, there are three downloadable tunes to read along to (including the must-see-live Gary Wrong Group!)

Those who have been following The Humans so far know what’s in store, but I gotta say, the righteous road action and gang fighting are absolutely over the top this issue (this is a compliment!)  A collection of the first four issues (and the uber-limited #0 issue) came out during the down time, so if you haven’t been following and want to jump in, that’s a quick and cheap way to do so.  Image does it’s readers a great service by selling first collections of titles on the cheap.

The collective creative team of Keenan Marshall Keller, Tom Neely and colorist Kristina Collantes are simpatico, and are all just as important to the book.  Issue #5 is the team debut of Carmen Monoxide as art assistant.  Neely’s art and Collantes’ colors enhance the early ’70s vibe of the book, but the duo really shines in action sequences (and especially the front/back cover splash page.)  High marks all around, and I’m glad we’re back on a monthly release schedule, as I missed my regular fix of The Humans. 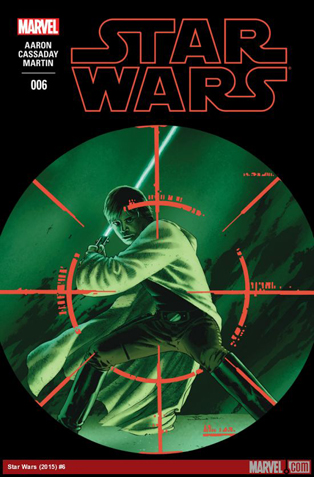 Star Wars #6 offers plot twists and turns aplenty, and new revelations about characters who have been established for almost forty years at this point. While this makes sense in the context of say, the upcoming Episode VII, it’s a little bizarre to have these revelations being made retroactively to the timeline of the original trilogy. That said, Star Wars #6 is a fun issue that left me wanting more, but also left me wondering how this series is going to play out in the big picture.

Case in point: there’s a huge revelation about Han Solo’s past in this issue. It’s something that seems like it’s a little shoehorned-in at the moment, but could ultimately be revealed as something else, hence why we never really hear about it being mentioned in the original trilogy. I’m curious to see how it will play out, because ultimately it could be something that realistically does fit in with the already established timeline of everyone’s favorite Corellian smuggler, or it’s going to be a huge case of convenient amnesia.

While I’m being vague about that, I will discuss the other major storyline of this issue at Obi-Wan’s hut, where Luke and Boba Fett throw down. While this also seems odd it makes slightly more sense in the contintuity, since Luke and Boba never really share one-on-one time in the movies to acknowledge this meeting in the original trilogy until the chaotic battle aboard Jabba’s Sail Barge, where they’re just fighting again. Oh, and when they were on that funky Heavy Metal-inspired world during the animated sequence of the Star Wars Holiday Special, which is no longer canon according to Wikipedia. Anyways it’s a fun action sequence that artist John Cassady pulls off, for the most part.

If I have any issues with the battle and how it was artistically portrayed it’s with Luke wildly swinging around with his lightsaber while blinded and not bringing down Kenobi’s shack all around him. Is he truly that strong with the force, or were there some artistic issues with conveying the cramped interior space of the hut that Cassady got really loose with? It’s a little confusing and unbelievable that not only is the hut still standing at the end of the battle but that Boba Fett walked away with all of his limbs.

Then there’s the MacGuffin that plays a major role in knocking out Boba Fett and winning the fight for Luke: Obi-Wan’s journals. With this and the revelation about Han Solo I’m really wondering how seamless these background plot revelations will be. Again, it would be one thing if this all took place after Return of the Jediand major plot revelations could be made without compromising what we’ve seen on the screen. But with Obi-Wan’s journal for instance how is the issue of Anakin Skywalker going to be danced around? If writer Jason Aaron plays his cards right this could lead to some interesting coloring of Obi-Wan Kenobi, a character who had a relatively long life that is still very mysterious. We know that he had good intentions but there was always something deceptive and cruel about how he was never up front with Luke about his father, especially since he had been watching over the boy from afar for years.

Ultimately we’re talking about filling in space. There are a few ways to do this, but it’s very tricky to make it more than just filling in space, or killing time before something really cool and epic happens like the events in the movies. I can’t imagine the long game of this series will be to stick exclusively to this period of time between Episodes IV and V, and I’d love to see a brief run that takes place between Episodes V and VI, and maybe even another stab at telling tales post-Episode VI, since the EU has been eliminated. For now I’m still invested in where Jason Aaron plans to take us with this storyline, and hopefully he manages to keep this house of cards from collapsing.

The force seems to be with this creative team so far, so I have faith.

The Josh and Jay Show Featuring Rowan Kaiser – Episode 111: Year of the 4