Hashihime of the Old Book Town is a dark Boys’ Love story about terrible people hurting each other, intentionally or not, as they fumble their way towards a bittersweet ending.

I bought this VN back in October of 2019, and it’s taken until now to give it a proper review.  A combination of factors played into this (it’s long, it’s dark, I got distracted by other things) not the least of which was me simply not being in the right mood for a horror mystery.  Hashihime follows Tamamori, a young man from rural Japan who’s come to Tokyo in 1922 to attend university.  Unfortunately, he failed the entrance exam twice and now lives in an apartment above a used bookstore (hence the “Old Book Town” part of the title) and spends his day writing subpar short stories and frittering away what little money he’s able to amass.  He attracts all manner of horrible people to himself and regularly gives the audience fresh reasons to dislike him by being selfish and petty, and really only shines as a person when situated directly next to even more unpleasant or manipulative characters.  You’re not going to enjoy this VN for the people is what I’m saying. 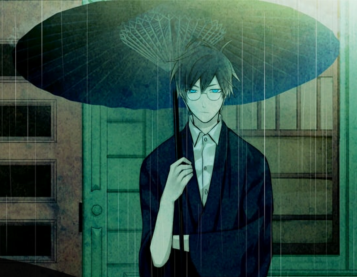 But however much I disliked the characters, I did enjoy the story surrounding them.  One rainy day, Tamamori finds out that his best friend has committed suicide out of nowhere.  Shortly thereafter he’s stalked by a mysterious giant, who seems bent on killing everyone Tamamori comes into contact with.  Eventually face-to-face with him, Tamamori flees, falls into a puddle-

And is transported back in time several days, before anyone died.  Granted a second (third, fifth, etc) chance, Tamamori sets out to determine what exactly caused his friend to perish and how he can go about ensuring that he and his friends get a happier ending this time.  Some of his attempts are, shall we say, more successful than others.

Clearly, Hashihime isn’t light reading.  Aside from the murder and suicide I’ve just mentioned, there’s rape, dubcon, implied child molestation, gaslighting, physical abuse, and other darker themes (props to mangagamer for making sure you get a big warning about all this before you start reading) throughout the VN.  And this thing is long, guys.  A lot of people clocked about 30 hours into reading all the routes, and while I lost count of exactly how long it took me I’d easily say over 20 for myself.  Mercifully it’s not necessarily a choice-driven VN which doubtlessly would have increased the play time; you basically play the whole thing through once like a kinetic VN, and then on subsequent reads are given a variable amount of choices that don’t lead to bad endings, necessarily, but simply alter whose route you end up taking.  All the same, this wasn’t a story I could simply read at any time.  I had to be in the right mood and mindset with a few hours to devote to it, and willing to endure whatever new deplorable behavior I’d find in the romantic interest on my current route.

And then along came COVID.

I’m not saying that a worldwide pandemic was the necessary motivation for me finishing Hashihime.  I’m saying that working in healthcare right now is akin to navigating a terrible hellscape, even if you’re not employed at an acute care facility.  It’s coming to work and hearing that three people on the (thankfully sealed) unit next door to yours tested positive, with you finding out not because management told you (they’re only reporting numbers) but because some of the float pool nurses heard about it and passed it on.  It’s wearing the same disposable mask for ten straight work days because they’re trying to ration PPE.  It’s administering a COVID test to a patient Friday and not getting results until Monday because the lab people were off this weekend, so you and the charge nurse kiddingly debate loading up the patient in question in your car and driving them down to Walgreens to get the results faster.  It’s having a sealed unit for recovering COVID patients for three weeks before management decides we don’t need it anymore because reasons, AND THEN realizing the doctors weren’t consulted about the choice because their first reaction to you telling them is, “The COVID unit’s gone?  Oh shit.”

Every day is a game of Russian roulette of whether the people you’re working with are healthy or asymptomatic carriers (the majority of the workers who’ve tested positive at my facility are).  You watch your patients for even the smallest uptick in temperature and heart rate; a minor cough that would have been ignored six months ago gets reported ASAP.  Visits with family are conducted through glass windows for your older patients who have trouble with Facetime.  Face shields or goggles are now mandatory.  You peel off your clothes and shoes as soon as you get home at night and wash them separately from the rest of your laundry.  Our policies are constantly changing; you can never be certain from one day to the next what you’ll find when you come into work.

Hashihime brought me comfort in the midst of all these things.  I enjoyed slipping into a world where people can still critique writing at cafes or watch horror films in movie theaters without masks, because there is no fear of them becoming a new hotspot of disease.  The VN is set firmly in the early 1920s, so you know how historical and political events referenced within are going to play out.  The past is concrete and absolute; there’s no unease in not knowing what the next few years hold for our main cast.  In fact, a number of the more famous authors or places they mention throughout Hashihime actually have an in-game popup window you can open to read a bit about their history and ultimate fate (slight spoiler, most of the buildings you encounter burned down in the aftermath of earthquakes or the war).  You are exploring and experiencing a world whose past, present, and future is known, and can anchor yourself in that. 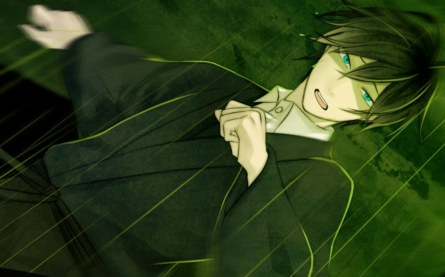 I even found myself appreciating the more unpleasant characters in the story.  While they are indeed monstrous, they’re monsters I know.  Our knowledge of COVID is ever-changing; protocols we believed sufficient a month ago have been completely altered since then.  This real-life horror appears to be in a constant state of flux, our knowledge of absolute details less concrete than the epidemiologist at my facility would like them to be.  But when I slip into the world of Hashihime, I’m watching a story populated by the abusive and jealous friend, the quietly violent nationalist, the amoral scientist.  I recognize these monsters as easily as Freddie or Leatherface, I see them pull on their barbs and flaws like an old friend selecting an outfit from the closet.  I sink into the familiar beats of their abominable behavior.  I take comfort in knowing that the damage caused by a single, ordinary person has a hard and faster upper limit and is unlikely to bleed out into the world beyond their personal bubble.  I even like the twisted affection they show to one another, reminding me that there’s still something softer and human lurking beneath the surface.

I cannot disconnect from the reality of COVID.  It surrounds me wholly for twelve hours every shift I spend on the hospital floor.  It’s the conversation topic of choice for my patients; its presence echoes down halls that are empty of visitors, now populated only by nurses and techs donning ever-present masks and face shields.  It’s impossible for me to come home and fully escape into a cheery work of fiction; I’m too stressed for the immersion to take.  It’s much easier to trade one monster for another, to sink into a story of suffering and confusion and desperately seeking a way out of this bloody disaster even as everyone around you insists your efforts are ultimately futile.  Give me horror I recognize.  Surround me with tragedy and pain that I understand and have witnessed countless times before.  Above all, show me that there’s a potential ending to it all, perhaps not happy in the way I’d like it to be, but better than what I’m experiencing now.

Hashihime of the Old Book Town is available on Steam and Mangagamer.  There’s a lot of adult content so I’d strongly recommend buying from the latter in case the former boots it off later.  It’s dark, but I honestly loved it and would recommend it to anyone who wouldn’t be triggered by the myriad of darker themes in the story.  I hope you get something out of it too.