From the very inception of video games, soundtracks have been an important signifier of what to expect from the worlds we are about to explore. Before acoustic instruments could be rendered, composers had to try and create music through the minefields of Konami sound chips and restricted sound channels, with the very best writers creating the motifs that still endure, survive and thrive to this day. Take The Legend of Zelda, for example: composer Koji Kondo had nothing but a 5-channel sound card to work with, but 25 years later his layered, emotive music was transformed into a fully-orchestrated masterpiece fitting for any symphony hall. Time and time again, composers have pushed technology to its very limits in the name of artistic ingenuity.

This happens all over the world, but it is undeniable that some of the most influential artists and iconic scores have come from Japan. Mario, Zelda, Final Fantasy and so many more franchises are famed for their innovative musical design. But this creativity didn’t happen in a vacuum. Composers like Noriyuki Iwadare, a veteran composer of 30 years most famed for his work on the Phoenix Wright games, have taken inspiration from an eclectic spread of influences, as he explained to me:

“From around my middle school years, I grew up listening to The Beatles, The Carpenters, Billy Joel, Deep Purple, Paul Mauriat, Glenn Miller, Benny Goodman as well as many Classical artists such as Mozart, Beethoven, Tchaikovsky and Gustav Mahler.” He continued: “My range of genres is all over the place. I used to record the music that played on FM radio and listened to it repeatedly. I think that all of the famous songs that I listened to countless times during my teenage [years] and 20’s fused somewhere within me and became the springhead of my music”

What Iwadare is touching on here is a classic example of what musicologist and composer Robert Howat calls “sound cycles” – when a genre, harmonic structure or instrumentation is imported from another cultural standard and is then adapted and innovated on to create whole new music. This has been happening for centuries across the world, such as the Windrush generation bringing reggae, rocksteady and calypso rhythms to the U.K. in the 1940s, eventually cross-pollinated with the fast-tempo punk scene to birth 2-tone Ska in the 1970s. With Japan, however, this process was accelerated when the United States began its occupation of Japan post WWII, bringing with them jazz, soul and rhythm and blues. Robert took the time to show me an example of this at work.

“Just look at City pop, for example. Japanese music that takes direct influence from American musicians like Roy Ayers, innovates it with modern Japanese influences like 8-bit music and then exports that back to the west to influence the next wave of western artists and so on”.

This constant cycling of styles, genres and creative processes forms a melting pot of cultural identities that create something both incredibly international whilst cementing a sound that, in the case of City pop and JRPG soundtracks, is still very Japanese. For example, the whole orchestration of the Final Fantasy VII Remake is very western. Giant string sections, a lot of percussion and swelling horns. All very dramatic and very modern western film music.

For Robert, the innovation comes from what else is incorporated.

“JRPGs seem so willing to adopt different genres, styles and instrumentation into their music. There are, of course, taiko drums used throughout which are Japanese but the blend of genres, such as heavy metal, with orchestration is something I very rarely see in western music.”

Years of taking inspiration from different genres and international music have given composers like Iwadare “an ear for listening to music. Through engaging in many different works, my own range of music has expanded (classic, jazz, rock, country, electric, pop, and even the most recent genres of music), making me able to learn many different things. I feel that will continue from here on as well.” 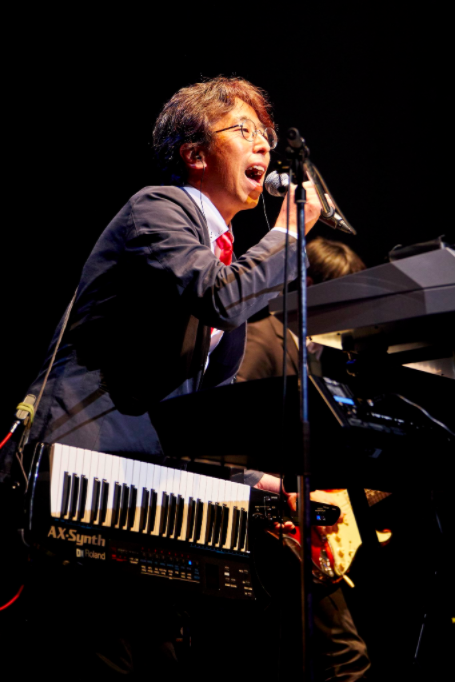 This can be seen most obviously in Iwadare’s creative process. He starts with a touchstone to focus his sound. “ [for example] when I composed songs for the Langrisser series, I was surely listening to Led Zeppelin. For Grandia, I only listened to fold CDs[1]. There are times where I have to concurrently work on different projects at the same time, so I do this so as to not lose my direction.” What follows is compartmentalization: “I separate my music into the categories: music as a mouthpiece for the main characters’ feelings (emotional music), music to give an idea of the area, geography and era that the game takes place in (background music), music for the characters (theme music), complete music for the opening and ending themes, other (menu screen music, tutorial screen etc.).” Before all of this, however, Iwadare simply asks himself: “What kind of expression style should I use? For RPGs, the use of orchestras is quite common, because the worlds are big. For the Phoenix Wright series, techno was a very prominent element.”

The Phoenix Wright music is restricted in aural scope thanks to the Game Boy Advance’s dual 8-bit DAC stereo sound card but this didn’t stop Iwadare’s ambition to create a techno-heavy soundtrack, taking obvious cues from artists like Daft Punk. The use of techno music gives every interrogation and objection a frenetic energy that perfectly matches the scope and absurdity of the on-screen events. What’s most interesting about Iwadare’s process, however, surrounds the use of orchestration in RPGs. He is right, that bigger spaces allow space for orchestras to really flourish. You only have to look at the enduring success of Final Fantasy soundtracks to see that using big, neo-romantic orchestration is evocative and moving. But with modern JRPGs, like 2017’s Persona 5, we are starting to notice a shift in aural influences.

Persona 5 is the size and scope of any Final Fantasy game, albeit set within the very real surroundings of Tokyo compared to fantasy settings like Final Fantasy X’s Spira. Shoji Meguro, the Persona franchise composer, cites both Japanese bands like CASIOPEA and western artists like Jamiroquai as a heavy inspiration, but comparisons should also be made to modern artists like Thundercat, Flying Lotus and Kamasi Washington. These modern composers and players have all taken inspiration from seminal 90s Japanese video games like Street Fighter, as well as the aforementioned American composer Roy Ayers. Therefore, games like Persona 5 and Phoenix Wright have become a glorious smorgasbord of sounds influenced by one another.

As technology improves, composers like Noriyuki Iwadare will continue to broaden the scope of what can be created within these worlds, to explore different sound cycles in aid of creating a sound that is incredibly fresh and influential. For Iwadare though, this innovation comes with a compromise.

“In an environment where the number of melodies and tones are limited, creating your ideal image could be challenging. Being able to conserve as little as 1byte of memory space for a game composer at that time [1990s] would be classified “stoic” like a monk (though at the time they were most likely intrigued and enjoying the process of creating melodies, which blinded the environment they were in). For that reason, the distinctive “unique” video game music was thought to have been created. Hardware has made advances, characters began to talk, and music has changed from built-in sound sources to streams, thus making us able to compose music that isn’t too different from the music we hear all around the world. I feel that the very “peculiar music” that we’ve made up until now has gradually become more “conventional music”.

“We have to make even further developments from here on, but I would like to strive for the mix of “haphazardness” and “inevitability” that could only be found in video games.”

This mix of “haphazardness” and “inevitability has already entered the worlds of modern writers and composers, pushing the envelope and creating fresh new sounds. With video games’ growing influence in modern society, composers like Noriyuki Iwadare will soon become the touchstone for musicians across multiple disciplines looking to add innovative and inherently new music to the next sound cycle.

Interview translated by Ahraun Chambliss. A special thanks to David Shimomura for his cultural consultancy.

A Weekend in April

Mafia III and The Difficulty Of The Videogame Mixtape

Hashihime of the Old Book Town