In the Drawn Trilogy, a series of adventure games from Big Fish, the princess Iris can turn her artwork into reality. Living through a global pandemic, this concept is more appealing than ever. It feels like what I’m doing when I play videogames or read novels, but with the addition of agency: you’re creating the world you’re escaping into. I could draw a world with universal healthcare, competent national leaders and adequately compensated grocery store employees. Then we could all just disappear into it.

In Drawn: The Painted Tower (2009), the player discovers that Iris, the princess of the kingdom of Stonebriar, is trapped in a tower, sequestered away from an evil king who knows she is the only one who can rightfully dethrone him. With the help of Iris’ elderly guardian, the player must rescue Iris from said tower. In the game’s first sequel, Drawn: Dark Flight (2010), the player helps Iris dethrone the aforementioned bad king and take her rightful place as queen. In Drawn: Trail of Shadows (2011), Iris’ guardian tells her the story of a boy trapped in a painted world. Each game’s puzzles include paintings you can step into, imagination materialized. You approach a painting of a farm and enter a pastoral scene to solve a puzzle for a scarecrow. A painting of a cauldron sends you searching for ingredients. You mix paints within another painting, 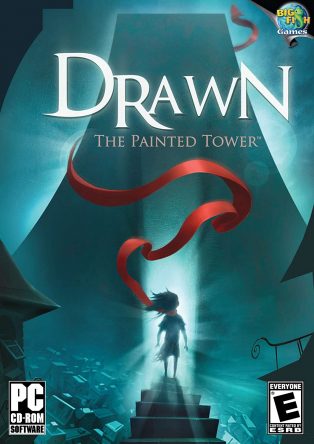 Aesthetically, it’s exactly the kind of game I like: lush and dark. Drawn’s designer and art director, Brian Thompson, told Adventure Classic Gaming that “I have always enjoyed darker storytellers like Tim Burton, Lewis Carroll, Edward Gorey, and The Brothers Grimm and I have always gravitated toward stylized and whimsical imagery.” Gothic influences across the board, enhanced by Drawn’s painters, Soi Che and Hamzah Kasom Osman. Of course, the story didn’t get as dark as it could have. According to producer and designer Chris Campbell, “Version 12 of the story – now that was dark! Originally we had [Iris’ guardian] falling down a flight of stairs and we opened with Iris standing over his grave. It was a bit too sad.” I’m glad the Drawn architects didn’t ultimately opt for that darkest timeline. As I think about the game now, going down the rabbit holes of dark fictional timelines while appearing to live in one of reality’s darker timelines while also trying to escape into a videogame that doesn’t have the darkest of timelines seems . . . what’s the word? Suboptimal.

The worst part* of our current timeline is not knowing the rules of the game or the average playtime (*obviously, this is in no way the worst part). Surviving a pandemic or fixing healthcare are much harder and lengthier quests than rescuing a princess from a tower. And they’re quests in which I don’t even know the rules. I know the rules of rescuing a princess from a tower: Solve puzzles or riddles or go on fetch quests for magical creatures. Get to the top of the tower. Defend the princess on the way down. Help her regain her throne.

Maybe I’d rather be locked in the tower myself, seeing no one, making art, quarantined and getting CostCo deliveries. Preferably with indoor plumbing. Actually, my current situation (sheltering in place with several friends and a very large cat) seems better than living in a kingdom that may or may not have indoor plumbing, even if CostCo doesn’t deliver here. What I mean is, however I’m spending my quarantine, however grateful I am for the situation in which I find myself right now, I still want to step into a pastoral painting. But I don’t even want that as much as I want our fucked up timeline to have a subreddit full of concrete answers, an official playthrough, an achievable ending. None of us know right now whether it does.