Maybe it’s because of The Goonies, but I love overcast days. Days when the atmosphere is oppressive with the possibility of rain. When the wind whips through the trees and cuts through to the soul, giving an uncontrollable shudder of excitement, I feel most alive. What makes these moments special, and frustrating, is that they are fleeting by nature. Like a junkie looking for my next hit, I chase these feelings.

There have been a number of games that have given me this experience, and they all stand stark in my memory. Daggerfall, Gothic II, Breath of the Wild, Demon’s Souls – these are all games that gave me the feeling of wonder and somewhat breathless possibility. When I find something like this, I tend to devour it. Lately, it has been Escape from Tarkov.

Developed by an independent Russian developer, Battlestate Games, Escape from Tarkov is a unique beast. At its core, Tarkov is a hardcore combat sim set in an alternate timeline where part of Russia has been cut off from the rest of the world, and certain special forces and locals vie for resources and loot. As for setting, think STALKER minus the mutants. It’s a pretty cool setting.

There’s a lot going on in Tarkov. The action takes place in two different forms – PMC and Scav. PMC is your main character. When you go into a map, anything you have (with a couple of exceptions) stays on your body if you die. If someone loots your stuff, they keep it. The same goes for your enemies. As a Scav, you play as a random character. If you die, you don’t really lose anything because you didn’t equip the character. If you escape, you get to keep whatever you make it out with. Playing as a Scav is on a 20-minute timer, to prevent equipment farming.

When you join the queue for a map (there are a number of large maps in Tarkov), you are put into a map with a handful of other PMCs. The levels all have AI Scavs that are hostile to PMCs, but most are friendly to player Scavs until they are attacked. There are also AI bosses on several of the maps that are very tough and hostile to everyone. Each map has a time limit. PMCs spawn in at the beginning, then a random amount of time afterward, player Scavs join in. The map ends at the end of the timer, anyone who hasn’t exited the map from their pre-set exfiltration is considered MIA and loses their equipment. 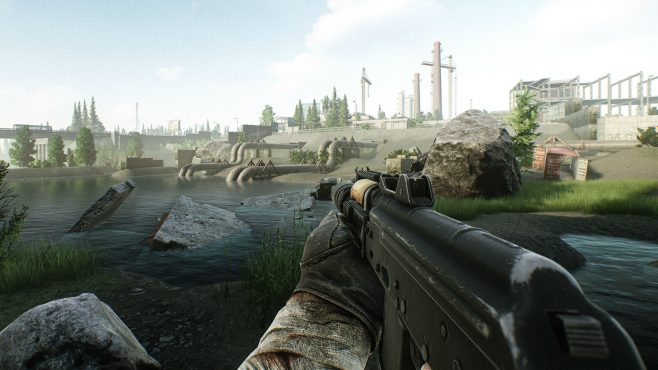 When not on a mission, you spend your time managing your inventory, auctioning off goods and crafting in your hideout. Before you get access to the Flea Market (the games auction house), you can deal with the different personalities in the game. They all sell different things and offer you different quests which all come with rewards and improve your standing with the vendor you help. Once you level up the different vendors, they offer better equipment and prices. You get access to the Flea Market at level 15.

The other part of the meta-game, as alluded earlier, is your hideout. The hideout is a place for you to make different workstations and amenities that improve your quality of life in-game. Some examples of bonuses are reduction in the timer for you to play as a Scav and quicker health and food recovery. Yes, you have to eat and drink, but it’s not as irritating as you might think.
And that is the game. Much like any other game, a technical description doesn’t do it justice. Me telling you about the different mechanics in broad strokes doesn’t give a great feel for the actual play, but in this case, I feel it’s necessary. When you start a game of Tarkov, you choose between two different times that are constantly rolling and weather conditions that are constantly changing. Some games are bright and sunny while others treat you to drizzle, fog or a driving storm. The simulation side of the game takes quite an impact based on the weather. Sound plays a very big part in the moment to moment gameplay, and having a driving wind and torrential rain, not to mention lighting and thunder, can change the way you play. Not only that, it also changes the way others play.

One of the big draw to fans of games like ARMA is the simulation level. This game has the most robust gun assembly mechanics I’ve ever seen. And with that is the rest of the gear – night vision, heat vision, headphones to amplify sound, etc . . . When the weather is insane, a lot of that stuff is mostly negated, leveling the playing field. Each round of Tarkov is a new exercise in adaptation.

Moments that are charged with excitement become more and more rare as you grow older. The magic of life can be lost in the banality of existence. But for a time, when I’m laying a bush in a thunderstorm, looking for a flash of movement across a field that marks the enemy standing between me and making it out alive with a pack full of loot, that wind stirs in my chest and I feel somewhat alive. That’s why I play.