Chris King, Creative Director over at Batterystaple games, leaned in to say “I love playing this game with people at your level, who get exactly what we’re going for.” If I can be described as “at that level” with any game, it’s Mega Man X. My hardest elementary school flex was a swole ~50 minute run using only the buster and the hadouken secret upgrade, that high-pitched tape-sped utterance more familiar to me than the original. From there I committed to the black-belt aerobatics of the Mega Man Zero series, a nourishing punishment for my oversized joints on child-friendly hardware.

So I was looking forward to settling in with 20XX for the long haul, starting with its early access development, though ultimately found that it stirred up the itch in my fingertips more than it soothed. It was uncannily close to my heart’s fondest memory and desire, an infinitely replayable festival of dashes and swings. But the game couldn’t stand next to the giants that inspired it, mostly on aesthetics—the iconic player, boss, and level designs were within sight, but not quite fully realized.

One glance at 30XX though and I’m back in. Glauber Kotaki, who ran pixels for Rogue Legacy, Chasm, Duelyst, and others is on deck now, and already what was missing from 20XX is made that much more clear. Beyond a clutch art upgrade, Chris tells me that that this sequel aims to build on the impeccable foundation of 20XX (and its forebears)—taut agility, multiple weapons, two-player runs, big boss fights. This time around they’re doubling down though; eight main bosses and related levels (up from four), and each of their stages built with three distinct phases that are still randomly assembled every run.

30XX promises to sharpen what was a very honed, if imprecise, homage. The demo at PAX East felt like coming home, and I’m frothing to dash and slash for hours all over again. 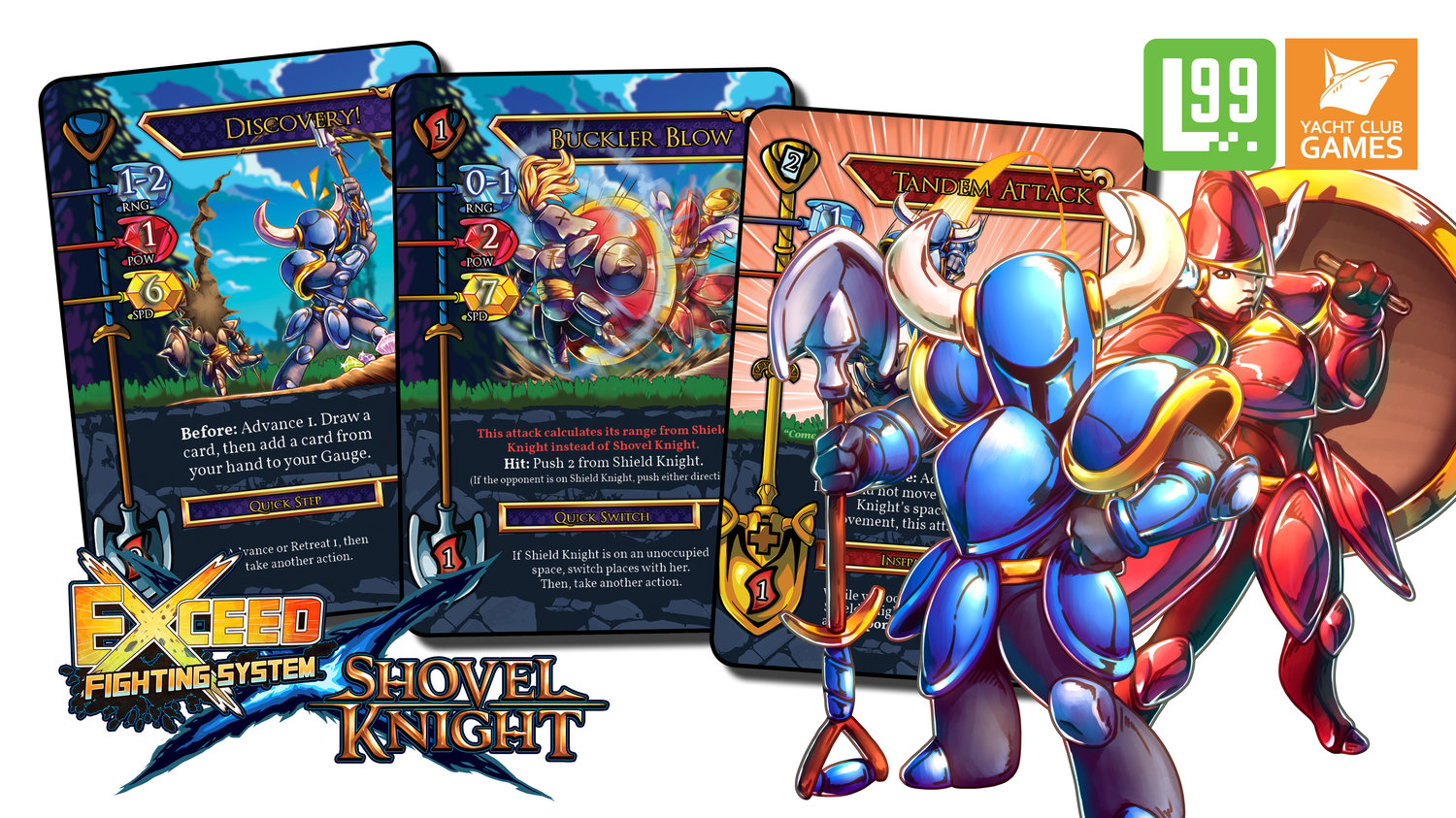 Got cold decked two fights in a row and I’m still here smiling for the time spent, and wondering why Exceed isn’t bigger. Perhaps Magic: The Gathering still hoovers all the oxygen in the room, table real estate still trades too high, or Exceed’s anime roots belay the elegance underneath. I’m far from plugged in so this is cheap speculation, despite the fact that I loved the Street Fighter integration and rumor holds that it was one of my most visited pieces.

Maybe a new partnership with the IP expansion experts Yacht Club will seduce more players. They’ve allowed Level 99 games to incorporate character decks from their own tribute to Mega Man, Shovel Knight, and as per the edict of the Exceed fighting system, they play near seamlessly against earlier incarnations. So though you might not have previously dreamt of pitting Tinker Knight against M. Bison in tabletop form, once you’ve seen the possibilities, your dreams will be enriched with crossover opportunities.

On the board, these fresh knights are about controlling space. It’s still a matter of intuiting your opponent’s strategy, going for big swings at the right time. Turns out I’m rubbish at timing, but it was still nice to give my houseguest some wins, as I am a benevolent host if nothing else. Regardless, Shovel and Shield, Mole, Tinker, and Propeller knights all hit hardest when considering your position and boosts before sliding in for the strike. Each match might be over before you could completely absorb the totality of your blunders, but they fly quickly enough that it’s easy to go on a run. The decks burst with the same vibrancy of the now many Shovel Knight titles and expansions, so if this is the nudge it took you to check out Exceed, then there’s no better time. 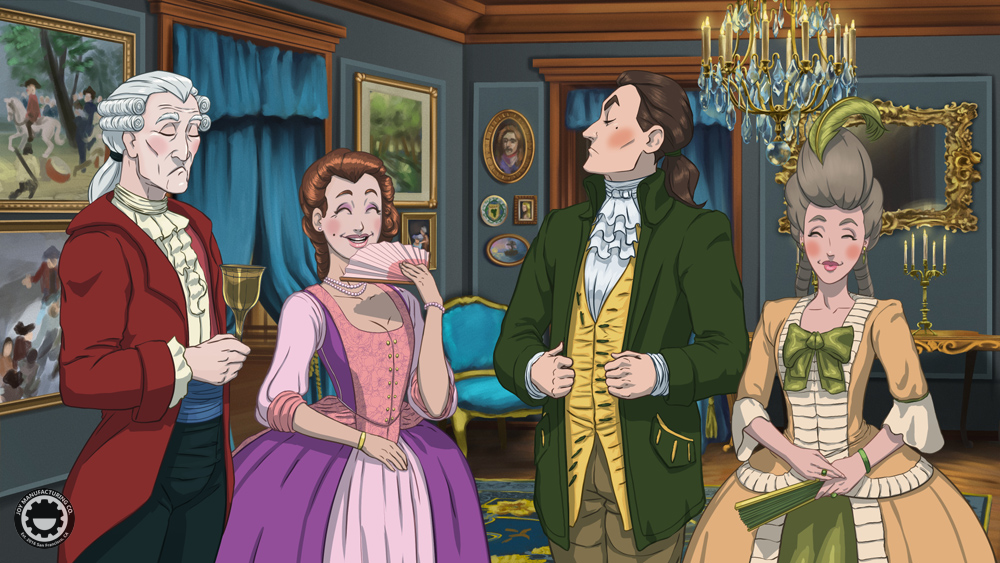 Ambition: A Minuet in Power

Joy Manufacturing’s Ambition: A Minuet in Power dove deep into the French revolution, and it shows from the start. A visual novel about “soft” social power, with some procedural elements and daily shuffles that help keep your choices from becoming rote as you play the part of a peasant woman who’s upper-class fiancé vanishes just before you arrive in Paris. Developer Luther Patenge is demonstrating the fashion of the era in full corset and wig on the PAX East expo floor, and he tells me that the team leaned hard on Citizens: A Chronicle of the French Revolution by Simon Schama, and many other texts and sources, to really tease out the threads of history they were most interested in pulling.

But they also looked back to The Three Musketeers (particularly the non-titular MVP, Milady de Winter) and a D&D campaign that brought the team together, and from which they named this game. Which is to say that Joy Manufacturing isn’t interested in merely teaching history, they want the players to get down in some muddy role-playing of politics and revolution. The narrative, clues, and invested parties of Ambition all shift from game to game, but the goals are the same—survive, thrive, and take control of your destiny, which was particularly difficult for a French woman at that time, let alone nowadays.

Luther tells me that of course it’s impossible to make a game like this that doesn’t also speak to the contemporary, and notes that it wasn’t inequality or poor living conditions alone that solely lead to the French revolution, but that both exploded at the same time. To avoid the guillotine, you’ll have to pick your words and your friends carefully, and spare no mercy for those enemies that would spare none for you. Joy Manufacturing hasn’t forgotten romance though, the most famous of French affectations. To earn power behind the scenes is to exploit attraction and sex, and to do so in the trappings of history means datable stars of history, all depending on the faction you’ve chosen.

You have the benefit of hindsight, if not infinite foreknowledge thanks to the random elements, which will serve Ambition’s many potential playthroughs. The world looks to leave royalty behind and you are at the cusp of the changing social order; the hand that you play in every parlor and dance floor will determine your impact on history, whether or not it’s rightfully recorded.

// Levi Rubeck is a critic and poet currently living in the Boston area. Check his links at levirubeck.com.

The Dioramic Ambiance of Overland