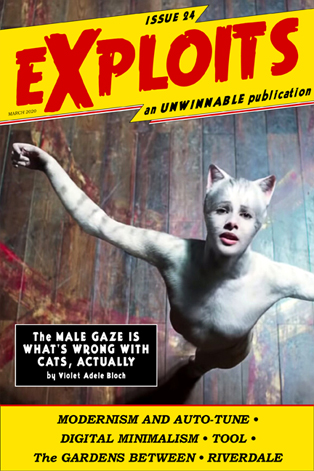 This is a reprint of a feature story from Issue #24 of Exploits, our collaborative cultural diary in magazine form. If you like what you see, buy it now for $2, or subscribe to never miss an issue (note: Exploits is always free for subscribers of Unwinnable Monthly).

If CATS is, per Lindsay Ellis, “[a] body horror sing-along extravaganza,” we must consider both ends of this dichotomy. I agree that CATS is body horror, because the felinoids making up the cast were clearly humans at one point (evidenced by their teeth and the small rings of human skin around their eyes and mouths). However, they seem unworried by their inferred off-screen metamorphoses. Were they rapid, painful, American Werewolf in London-esque affairs? Did they happen more gradually? This is left entirely to our imaginations.

CATS succeeds somewhat in the first sense, being an Andrew Lloyd-Webber classic. It falls utterly flat, however, in the second: these characters are not accessible. This is partly a consequence of their grotesque near-humanity, but I think it’s even more present in their framing. Since this is cinema, we have no choice but to see its world through the director’s eyes – in this case, it’s Academy Award winner Tom Hooper.

And, apparently, as he was making his latest film, Tom Hooper thought a lot about fucking these cats. But only the female ones.

This is most egregious is his framing of Victoria the White Cat. In CATS the show, Victoria is a mute audience surrogate. In the movie, she speaks and she takes on a very girl-next-door personality. It’s an archetype that’s heterosexual, somewhat inherently: she’s next door to someone, presumably you, and the person deciding who you are is Tom Hooper. A straight, white man.

The camera doesn’t shy away from this, either. Everyone comes away from CATS with a different image seared into their brain. Mine is probably Victoria, during Bustopher Jones’ song, kneeling in the contents of an overturned trash can, sensually nibbling CG meat from a bone.

Horror on the Orient Express