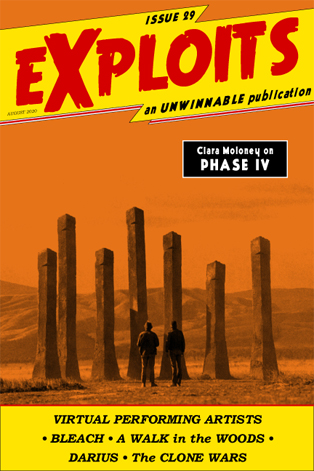 This is a reprint of the cover story from Issue #29 of Exploits, our collaborative cultural diary in magazine form. If you like what you see, buy it now for $2, or subscribe to never miss an issue (note: Exploits is always free for subscribers of Unwinnable Monthly).

Phase IV is the only film directed by Saul Bass, the designer of most of the greatest title sequences in film history, as well as a good chunk of the greatest film posters. It is, plot-wise, a pretty standard creature feature: Michael Murphy and Nigel Davenport play scientists studying mysterious activity among ants. The ants have seemingly abandoned interspecies conflict and are working together, building strange towers in the desert and making crop circles. The local population has fled, with the exception of one family.

But the extraordinary thing about Phase IV is how sympathetic it makes the ants. The shots of the ants are incredibly technically impressive: it’s hard to tell if you’re looking at real insects or animatronics, because neither possibility seems to account for the simultaneous realism and precision of movement. Even though the ants aren’t anthropomorphized at all, the film cultivates a deep empathy for them. Hubbs (Davenport) blasts one of their towers, and an ant carefully lines up the corpses of his comrades, creating a kind of memorial. We see more and more bodies of dead ants, and it unmistakably evokes real-life massacres of human beings.

The whole thing plays like an allegory for the Vietnam War. “They’re not individuals, they are individual cells. Tiny functioning parts of the whole,” Hubbs says about the ants, “Think of a society, James, with perfect harmony, perfect altruism and self-sacrifice, perfect division of labor, organized for preordained roles.” They’re communist, basically. Hubbs and Lesko are supposed to be scientists, disinterested observers analyzing the ants’ behavior. While James Lesko (Murphy) wants to study and potentially communicate with them, Hubbs unilaterally wages a war of aggression. Just as Lesko successfully communicates with the ants, Hubbs blows up their tower, massacring hundreds.

In his eagerness to destroy the ants, Hubbs kills all but one of the only family who didn’t flee the area. The ants break into an outside generator, and it triggers chemical weapons: an ant trap that backfires on fellow human beings. We see ants crawling out of a hole in the hand of one of the corpses. Lesko is deeply disturbed, but Hubbs is unmoved. “People get killed sometimes.”