“There are no abnormal things at sea.”

Do you remember The Asylum?

I say “remember,” as though they went anywhere, but as far as I know they’re still around, doing their thing, which is releasing extremely-low-budget versions of major Hollywood blockbusters direct to video, often with misleading covers. There’s even a word for them: mockbusters.

Their efforts in this direction include such titles as Snakes on a Train, Pirates of Treasure Island, Transmorphers, Alien vs. Hunter, Pet Graveyard, Atlantic Rim and Independents’ Day, though they’re probably most famous for one of their original ideas, the absurdly long-running Sharknado series of films.

Reigo isn’t a movie from The Asylum, but it may as well be.

Originally released as Reigo, the Deep-Sea Monster vs. the Battleship Yamato way back in 2005, long before even the first of the current wave of American Godzilla films from Legendary Entertainment, it has been put out on disc stateside by SRS Cinema and retitled Reigo: King of the Sea Monsters, with a cover that evokes the posters for Godzilla: King of the Monsters. 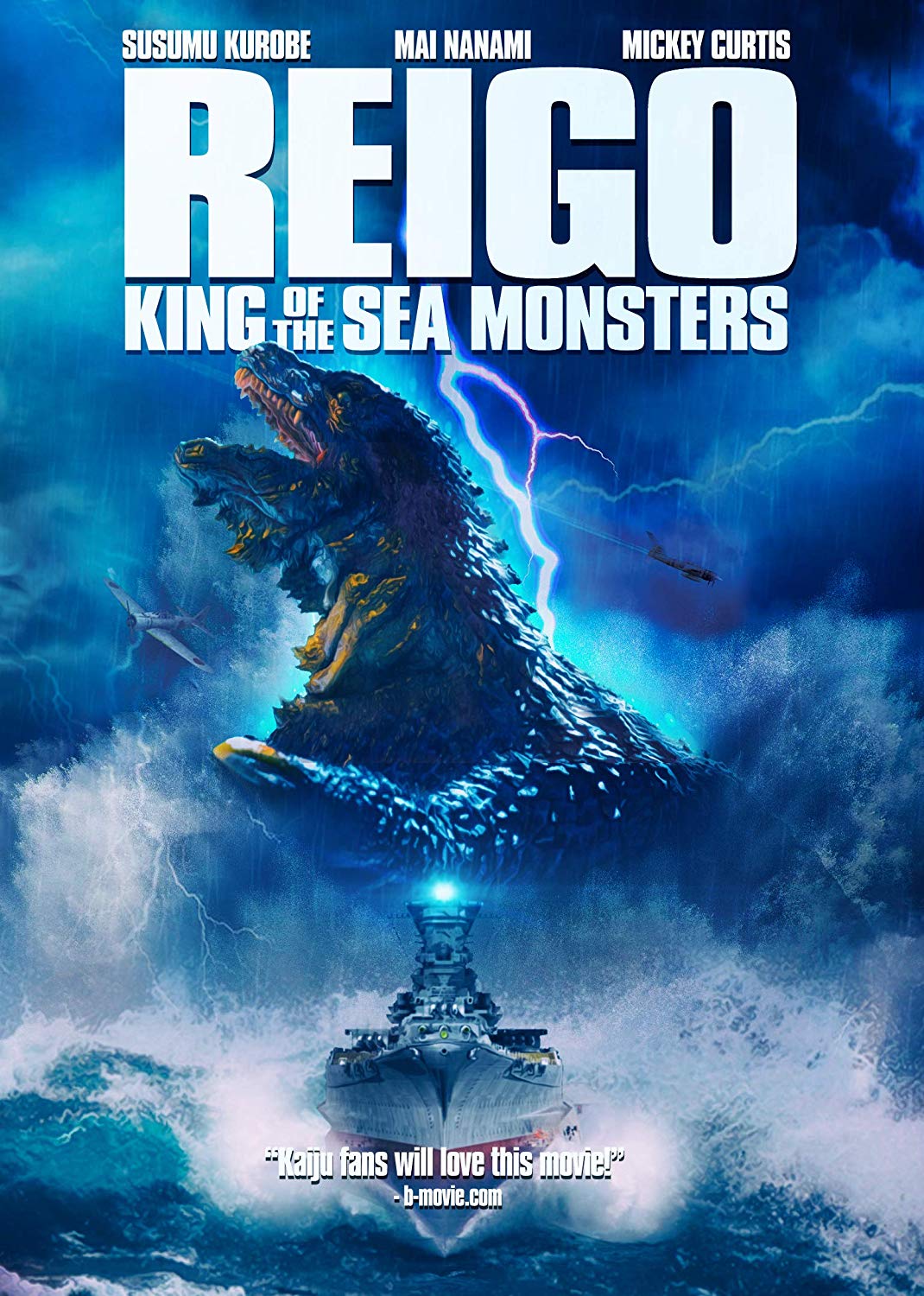 Of the four trailers on the SRS DVD that I received, two were for movies called House Shark and Bad CGI Sharks, while a third was for a low-rent take on Annabelle by way of Saw and who knows what else called Deadly Playthings, which should give you some idea of what you’re in for with Reigo.

Co-writer and director Shinpei Hayashiya – who played an uncredited role in Return of Godzilla/Godzilla 1985 back in the day – had previously made a name for himself with a fan-made sequel to Gamera 3: Revenge of Iris. According to Wikipedia, this film, known as Gamera 4: Truth, has only ever been publicly shown once in the United States, at the kaiju fan convention G-Fest 21, where Hayashiya was a guest.

With the independently-funded Reigo, he is given a chance to create his own kaiju sandbox to play in, and to his credit, he, along with creature designer Keith Amemiya, create an unusual sort of entirely aquatic kaiju in the eponymous Reigo, who looks a bit like a cross between Godzilla and a seal. (Reigo is also constantly being struck by lightning. I have no idea why.)

In addition, Reigo is accompanied by luminous “bone fish” monsters that, at one point, stage a bloody attack on the ship, leaping out of the water and leaving the deck strewn with body parts. These “bone fish” creatures later disappear from the film. Again, I have no idea why.

Amemiya also worked on several of the Kamen Rider TV series, the various Zeiram films, and videogames like Clock Tower 3 and Shin Megami Tensei 4, to name a few.

Reigo is set during the second World War, onboard the real-life battleship Yamato, although the ship, not to mention the rest of the Japanese fleet and the titular monster, are all brought to life through one-notch-above-Birdemic CGI – and a rubber monster head for close-ups.

I’m not kidding, either. For those who haven’t seen Birdemic, it’s a notorious so-bad-it’s-still-bad movie made infamous thanks in part to the guys at Rifftrax, where it is a fan favorite. One of the many standouts of this incredibly low-rent flick is its CGI birds, which are essentially just stationary animated gifs of birds that flap their wings slowly. 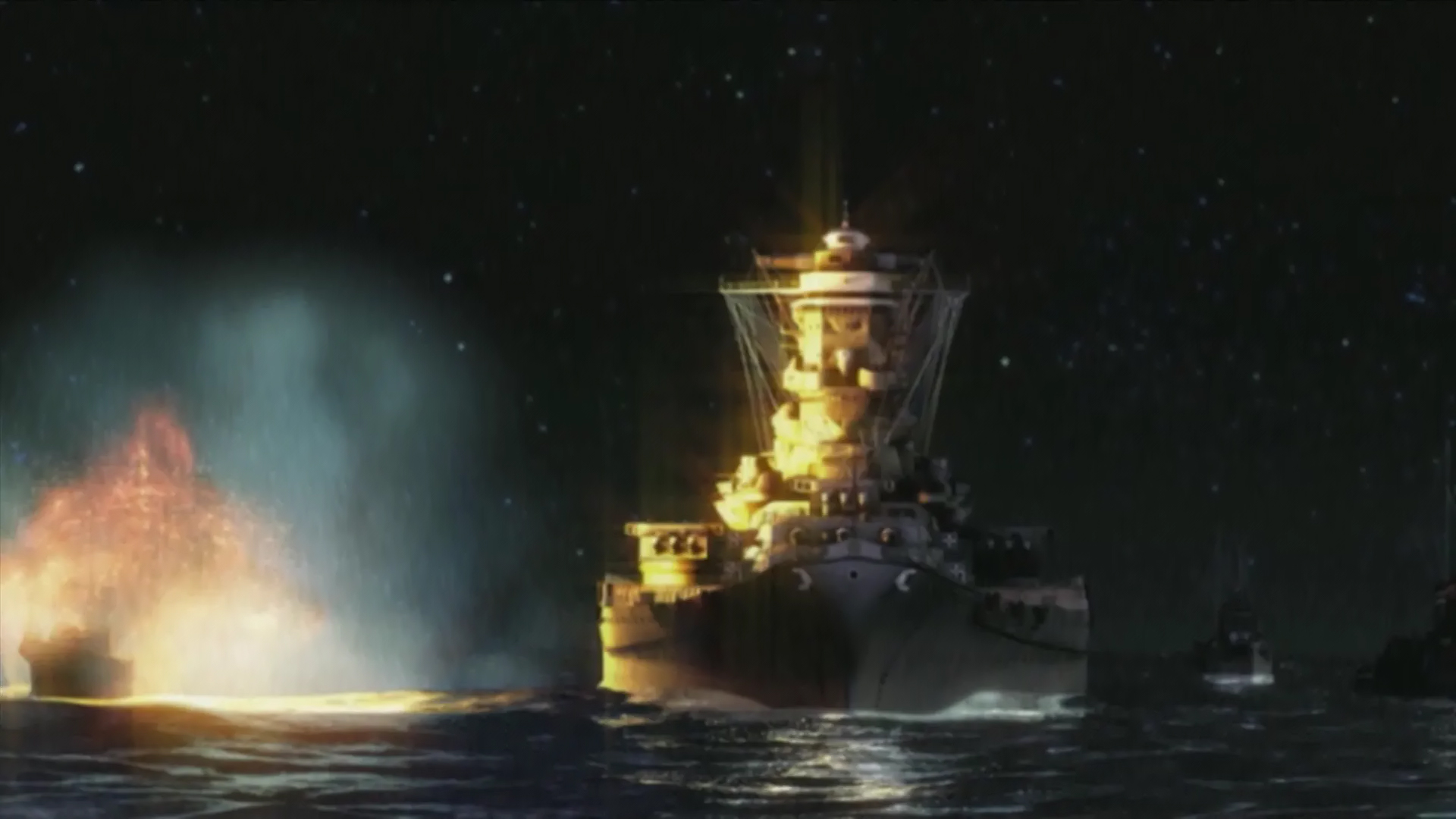 The CGI here is marginally better than that, but it’s still several notches below what you would expect in, say, a SyFy Channel original movie, let alone something positioning itself to be mistaken for a big-budget Hollywood blockbuster – except, of course, we have to bear in mind that, when it was originally released, Reigo was doing no such thing.

It was an independent production – really just one step above a fan film – and, as such, it probably shouldn’t be judged too harshly.

The writing – at least, in translation – is about what you would expect from a movie that advertises Bad CGI Sharks before the credits. Which is to say that there’s a lot of yelling and some off-color jokes and, at one point, when the tough, eyepatch-wearing captain angrily undoes the buttons of his dress uniform, they make cartoon noises. 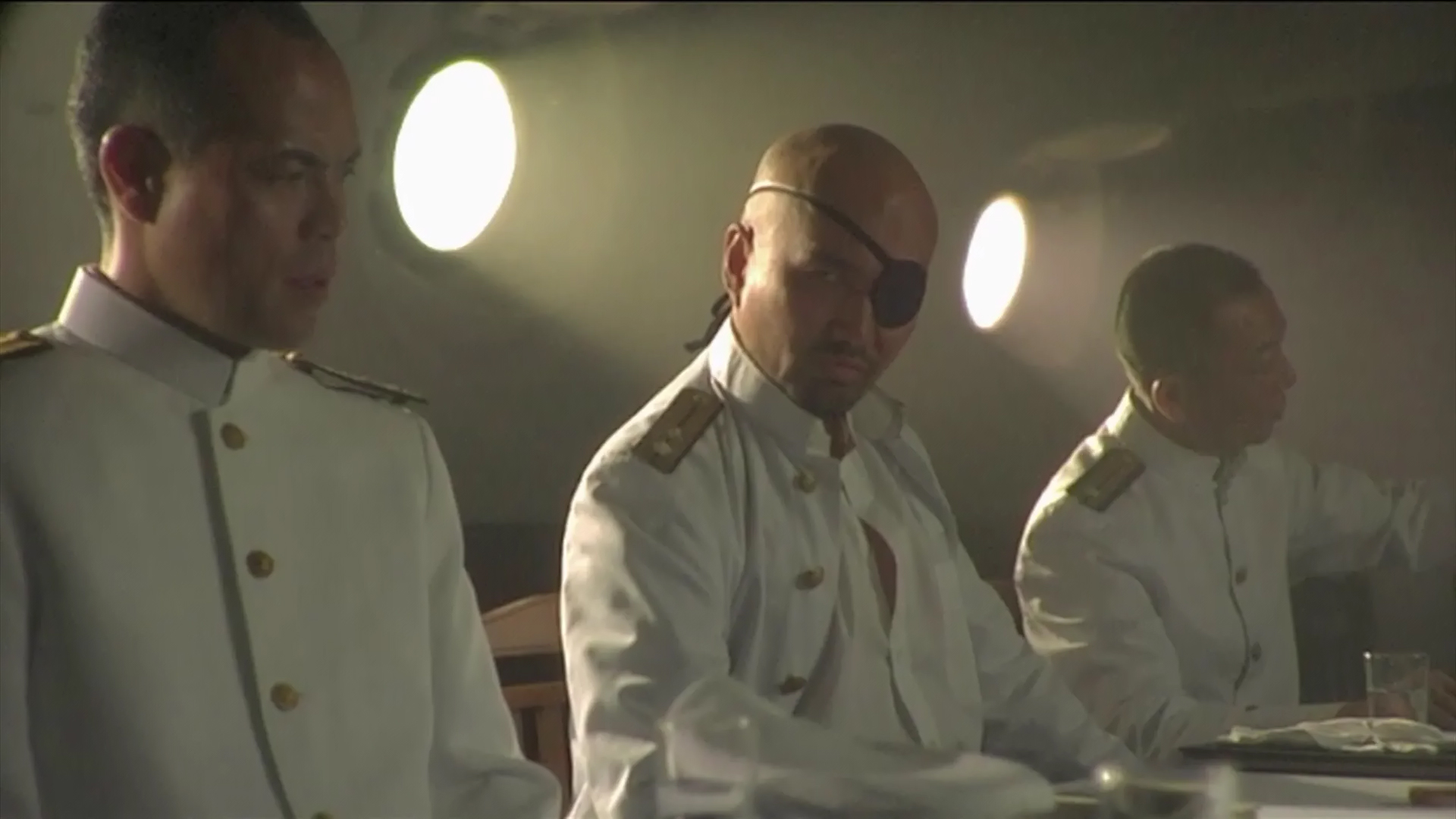 During its lengthy black-and-white opening sequence, one character, whose wife is pregnant with what he hopes is a son, comically prays for “a baby with a penis.” When they rescue an American sailor whose ship was destroyed by Reigo, he is clearly being played by a Japanese actor. Later, once the monster is defeated, the film becomes an odd, kabuki-inspired dirge for the sinking of the Yamato in 1945.

For most of its running time, however, Reigo is divided into two distinct – and repetitive – types of sequences. At night, the monster attacks in some PlayStation 1 cutscene-level CGI, the stakes almost impossible to guess or fathom through the digital haze. During the day, everyone on ship yells at one another about what happened at night. Later, rinse, repeat.

It’s an unfortunately boring formula for a movie about a giant monster, but that’s Reigo, anyway. Fans of people yelling, bad CGI, and characters repeating themselves – and one another – your proverbial (and literal, in this case) ship has come in. For everyone else, you can probably give this one a pass.

Reigo: King of the Sea Monsters

The New Age of Nollywood