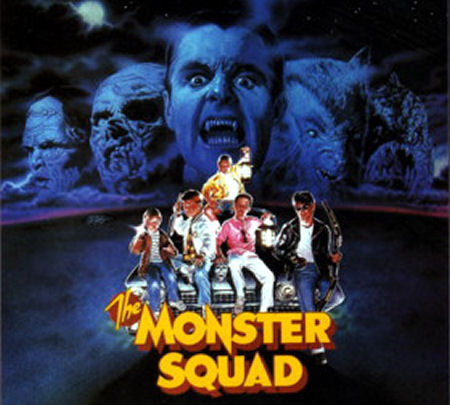 I can still remember the day I found out about The Monster Squad.  It was early fall and I rode my bike over to my buddy Anthony’s house to hang out.  When I got there I found him and my friend Ben sharpening branches that they found in the yard into wooden stakes. Being that most kids my age weren’t known for whittling, I was a little more than curious as to why they were doing this.

It would be a few months before I would finally get the chance to see The Monster Squad because it was always out of stock at the local video store. During that time most of my friends had moved on to action films, their days of monster hunting, like the fall, long behind them.  I, on the other hand, stayed ever vigilant in my quest to see the movie and on one snowy day that December my patience was rewarded.

My Dad took me to Allwood Video and I guess the stars had finally aligned that night because there it sat before me on the shelf, The Universal Monsters faces on the box cover staring back at me like a Hollywood horror version of Mount Rushmore.

The Monster Squad was a movie about a group of kids with a monster club who had gotten in way over their heads, fighting the forces of darkness with the fate of the world hanging in the balance.  They weren’t a crack commando team, far from it and if any of them were ever Boy Scouts, I would bet that they’d be washed out of the program. They were kids my age caught in an impossible situation armed with only their wits and whatever weapons they could steal or build themselves.

Now I will fully admit that when I was younger most monster movies scared the beejesus out of me.  The 80’s and 90’s were over saturated with creatures and killers, like Freddie and Jason that would viciously murder you in your sleep or when you were at your most vulnerable.  I was terrified of them to the point of having to watch The Little Mermaid one theater over at my friend Alex’s birthday party because I got too freaked out during Tremors.

However growing up on network television having seen Abbot and Costello Meet Frankenstein about a hundred times , I was already familiar with the Universal Monsters and after seeing the Wolfman get kicked in the nards and doubling over in pain, I felt less threatened by their depictions in The Monster Squad.

I knew I could definitely out run the Gill Man and the Mummy and I wasn’t too worried about Frankenstein because he was a big softy.  Dracula on the other hand was a completely different story. This version of Dracula killed cops, played fast and loose with dynamite and made little girls cry.  He didn’t sparkle in the sun or have a twenty four hour gym membership, he was bad news.  I still get amped every time I see him pop his fangs and say “give me the amulet, you bitch”, but for all my bravado I would probably scream like a little girl if he had me by the throat. I might even pee a little. 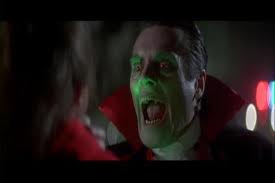 Having recently seen The Monster Squad on BluRay I can honestly say that to me it still holds up. At age 31 it feels just as amazing as it did when I first saw it at age 13. It was a movie that made me feel less afraid of monsters and gave me a yen for adventure.  After all these years I still want to be a member of The Monster Squad, and I know I always will.