On October 3, the fast-food restaurant chain Wendy’s released a tabletop roleplaying game called Feast of Legends: Rise From the Deep Freeze. The game consists of a rulebook and campaign guide that weighs in at just shy of 100 pages. Players take the roles of adventurers in the service of Queen Wendy and do battle against the agents of frozen beef. I am not making this up. You can go download the PDF for free if you don’t believe me (but I am not linking to it for reasons that will shortly become clear).

The art and layout of the book mimic that of Wizards of the Coast’s fifth edition Dungeons & Dragons, which is currently at a height of popularity, and the system amounts to a simplified version that game’s rules. Fast food is obviously a leitmotif throughout, with jokes and references to food and other restaurants liberally seasoning the text – so many of the special powers in the game are gained through eating, I expect that if I had They Live shades, the whole book would be the word “Consume” over and over again. Despite the fact that all this is played for laughs, the game design seems to have been approached with some seriousness – gags don’t usually run for 97 pages and involve charts. 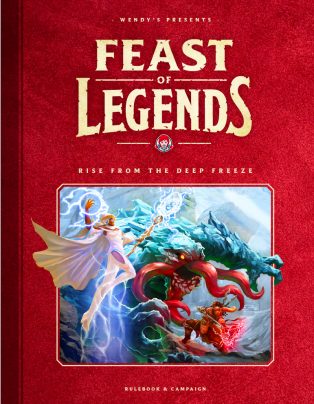 That apparent seriousness is what makes Feast of Legends an effective advertisement to players of tabletop RPGs. Anything shorter or less playable would have been dismissed as a pandering gag. Those high production values are both the hook and the problem. Upon its surprise release, initial reaction seemed to range from bemusement to delight. After simmering a while, criticism set in. This reached a climax when Critical Role released a sponsored one-shot of the game. The blowback led to Critical Role donating the sponsorship money to Farmworker Justice, a charity supporting equitable treatment of agricultural laborers (we’ll get to why that is important in a little bit).

Over the last few years, social media, particularly Twitter, has allowed corporations to communicate directly and publicly with individual consumers. Most of the time, these attempts have all the personality of an automated phone system, but in some cases, like with Wendy’s, a savvy social media team crafts a persona that is funny, relatable and able to wade into the issues of the moment. In a way, this isn’t entirely unlike the concept of Dungeons & Dragons gods manifesting in the material realm through avatars (which didn’t exactly work out well for the Forgotten Realms). These sentient brands affect a chummy demeanor in an attempt to humanize themselves and, while they may be amusing, it is all still a charm person spell. They joke and pal around with you so you’re more comfortable handing them your wallet.

Feast of Legends is an extension of this. Tabletop roleplaying games are experiencing a golden age and, thanks to D&D’s aggressive marketing, Critical Role’s massive popularity and pop culture nods from the likes of Stranger Things, they have penetrated farther into popular consciousness than ever before. Millions of people play these games. However, they are still niche enough and retain enough mystique that the act of embracing them still retains a veneer of coolness, or at least an insider sort of understanding. It was only a matter of time before a brand tried to capitalize on that.

This preys on a phenomenon specific to my experience with RPGs. For decades, they occupied the lowest rung of “nerdy” pursuits. I copped to reading comic books and playing videogames in middle school, but refrained from mentioned my enthusiasm for RPGs until well into college. With no real frame of reference to understand them and a vague sense they were dangerous thanks to the Satanic Panic, people who never played RPGs had license to mercilessly make fun of people who did. Navigating the treacherous rapids of teenage social hierarchies was easier if you kept the D&D books at home.

A sort of consolation was knowing that famous and respected people like Steven Spielberg were RPG enthusiasts (Spielberg is of particular note for including a fairly positive scene involving a D&D session in E.T. the Extra-Terrestrial in 1982, the same year the TV movie Maze & Monsters aimed to stoke fears about the game). If it was good enough for the guy who made Raiders of the Lost Ark, it was good enough for me. And since it was a good bet that the folks who might have stuffed me in a locker for playing D&D also liked Indiana Jones, there was a kind of comfort in being aware of their unwitting hypocrisy.

Times have changed, but that loser outcast vibe continues to be a component of the mystique of RPGs as much as the idea of having played contributing to some fuzzy notion of nerd cred. With Feast of Legends, Wendy’s exploits both. A massive corporation embracing RPGs seems like a vindication of sorts for players of a certain age, and also it allows the corporation to climb up on the coattails of folks like Spielberg. “Hello, nerds, we were always with you, even if it didn’t seem like it.” This should be met with skepticism.

A massive corporation embracing RPGs seems like a vindication of sorts for players of a certain age, and also it allows the corporation to climb up on the coattails of folks like Spielberg.

That capitalism and corporations suck is a truism, as far as I am concerned. I could go on at length, but in the simplest terms, the pursuit of ever-increasing profits occurs at the expense of the happiness, wealth, health and lives of workers.

In that light, the refusal of Wendy’s to join the Fair Food Program and its abandoning of Florida tomato growers in favor of exploitative Mexican farm operations is not terribly surprising (this is why Critical Role donated the Wendy’s sponsorship money to Farmworker Justice). What makes Feast of Legends so insidious is how it attempts to justify Wendy’s exploitative business practices by recontextualizing them in a silly game.

The villain of the piece is the Ice Jester who, well, is Ronald McDonald. Feast of Legends isn’t exactly subtle. McDonald’s, you might not know, is a member of the Fair Food Program (that doesn’t make them heroes – they’re still a corporation, after all – but their membership puts them directly at odds with Wendy’s). But that’s not all. Ice Jester is a member of the United Clown Nations, a weird and fairly obvious dig at the United Nations, noted proponents of international worker rights (it seems simultaneously ridiculous and important to point out that the UN has long been the subject of right-wing conspiracy theories accusing it of all sorts of nefarious assaults on liberty and sovereignty).

But let’s zoom in from the big picture. RPGs, particularly D&D, have often been noted for using the guise of heroic fantasy to encourage players to be “murder hobos” – that is, a group of wanderers who use strength of arms to kill their targets and steal their stuff. There is a lot of weird history there, but most of the time it is fine to chalk it up to just being a game.

That being said, the point of Feast of Legends is to, at the bequest of a queen with a cultish following, march into the Ice Jester’s house and murder him and all his henchmen…er…employees. As Freyja Erlings points out, “That’s the gameplay. That’s what the combat is for.” It is a lot easier to shirk criticism of the murder hobo thing when it doesn’t have a direct real-world corollary. With Feast of Legends, it feels a lot like us-versus-them propaganda.

A common argument to just laugh off or ignore Feast of Legends is that it will put tabletop RPGs in front of more eyeballs and bring more people into the hobby. But is this a good introduction? It strikes me as unseemly to welcome this sort of naked marketing into a niche industry that, from its inception, has been built and defined by a DIY ethos (even if D&D itself is currently owned by a corporation). Thankfully, I am not alone in thinking that. Soon after the release of Feast of Legends, a Reddit user named Leenxa posted Silence, Brand, a free tabletop RPG “about combating corporate pandering.”

Who wants to play?

I was skeptical about Feast of Legends when I first saw it, but when I sat down to write about it, Freyja Erlings’ excellent Twitter thread did a lot to crystalized my thoughts. My thanks to her.