“That guy is kind of a douche.”

That’s my fiancée, Daisy, watching The Witcher 3 as I play.

I don’t think she quite kens that I am pulling Geralt’s strings and choosing Geralt’s dialogue options. Which, in turn, makes me responsible for him being a douche, and probably makes me a douche in my own right. She’s also appears a bit shaky on how to pronounce his name, though I suspect she calls him Gerald on purpose, to tweak me.

“I wish he’d just talk like a normal person. Why does he have to be all whispering and dramatic?”

“He’s kind of a riff on Clint Eastwood’s Man With No Name,” I offer.

“Well, to become a witcher, he had to go through some sort of magical ritual that dampened his emotions,” I explain.

Every time Daisy watches me play The Witcher 3, over the course of many weeks and many, many hours, we have some variation of this conversation. And yet, she only rarely goes to sit in the other room. Geralt may be a douche, but he’s an interesting douche.

For every hour Daisy spends watching me pull Geralt’s strings, I spend four or five hanging with the witcher solo. In other words, I know him a bit better, thanks to a longer relationship.

I know, for instance, that Geralt does smile.

I bought the first Witcher game when it came out and its needs vastly outstripped my computer’s power. I fought through the stuttering graphics, met a red-haired sorceress, fought a spectral hound of some sort and gave up. By the time my computer got an upgrade, I completely forgot about the game.

When The Witcher 2: The Assassin of Kings came out, I was keen to try it and my computer was up to the task. My attention span, however, was not. The sequence of flashbacks were confusing and there was something about what I read as the game’s overall Game of Thrones-ness that turned me off. I lasted about an hour before abandoning it.

The Witcher 3: The Wild Hunt, though. Boy, is that one hell of a game.

It has its rough spots. I often got stuck in the game’s inconsistent portrayal of women. It is hard to understand what possessed the developers to include women shopkeepers bending over their wares at an awkward, sexually suggestive 90 degree angle. Or why they chose to sexualize Ciri with her peak-a-boo bra while the narrative works so hard to instill her as the object of filial affection.
That is a rare stumble. In other respects, The Witcher 3 is without peer. Much has been made of the beauty of the open world, the scope of its story, the difficult moral decisions and the nuanced depiction of the effects of war – and deservedly so. More than anything, though, the game’s greatest accomplishment is Geralt of Rivia himself, a character of such depth and fascination few others in videogames come close. John Marsten, probably. Commander Shepherd, maybe. 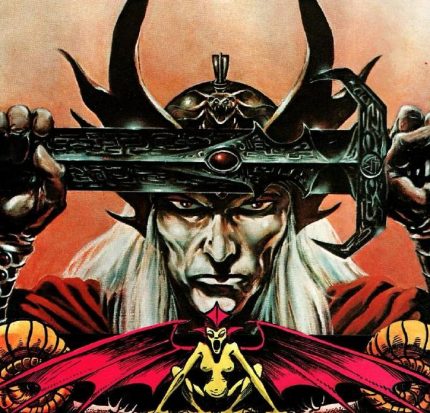 At a glance, Geralt is yet another grizzled father figure out to protect his daughter – a common gaming archetype in recent years. Worse, he looks like a Polish knock-off of Michael Moorcock’s Elric, perhaps the most emo fantasy character to ever draw a sword. Yet, unlike the albino swordsman or Joel from The Last of Us or Booker DeWitt from Bioshock Infinite, Geralt isn’t particularly angsty. He is serious, sure, but he doesn’t brood.
Perhaps this is because his emotions are diminished thanks to the magical process of becoming a witcher. And yet, they are diminished, but not gone. He can still feel, just to a lesser degree than normal people. Perhaps that is why he seeks such immediate, powerful emotional stimulation through combat and sexual promiscuity. Regardless, Geralt’s performance is one of subtlety and understatement. He does smile, but you have to learn how to spot it. He also has a wonderfully dry sense of humor, once you get his measure.

And I use the word performance purposely. The longer you walk with Geralt, the more the writing, the voice acting of Doug Cockle and the unprecedented technology conspire to convince you that this is an actor on a stage, not pixels on a screen.

It is through Geralt’s verisimilitude that the rest of The Witcher 3 springs to life.

There is a scene towards the end of Marvel’s The Avengers that has always bothered me. Loki, the villain of the piece, is in Stark Tower chewing scenery and rattling on about his master plan (which is disintegrating all around him). The Hulk proceeds to grab him and smash him repeatedly into the ground, knocking him unconscious. The scene is filmed to elicit a laugh from the audience, which it got at my screening, some scattered applause as well.

This is one of the most recent examples of a long tradition, particularly in genre fiction, of intelligence being associated with evil and might with right. The Conan stories are symphonies of brutality against wizards, priest and other civilized, brainy folks. For as smart as Batman is, he still usually solves his cases with his knuckles. Big Trouble in Little China’s Jack Burton is so gung-ho he often knocks himself out. When a clever character is the protagonist – Walter White, John Constantine, Corvo Attano – they are usually anti-heroes or exist in a moral greyness.

Much of your success in The Witcher 3 is dependent on cunning, however. Geralt is a professional monster hunter and his survival requires preparation and guile. And while he is adept with both his swords, a good number of conflicts can be resolved with discussion alone. Geralt’s diligent precaution in isolated encounters and contract jobs, by extension, prepares him for the labyrinthine conspiracies and politics of the game’s larger world.

Geralt is also set apart because he isn’t a hero seeking glory. He is a man with a job. The adventure of The Witcher 3 is an extension of that job. And as with any person with a job, his attitude towards it runs a range. We see him angry at his lot, philosophical, confident, despondent, frustrated. We also see him act none of the above, a work-a-day stiff, like any other, showing up, doing what needs to be done then fucking off to the bar.

He is very good at his job, but it isn’t his singular purpose. He is allowed to breathe in ways few game characters can.

When I was playing Dragon Age: Inquisition, I often felt paralyzed by choice. I wanted to make sure I did the correct thing at any given fork in the road. I wanted to make sure I didn’t blow it with my love interest, Cassandra. I wanted to get the best possible ending, with all allies and support and stories unlocked. I invested over a hundred hours in the game – I didn’t want to fuck it up.
I was aware of the machinery of choice in Inquisition. Decisions in videogames often boil down to a binary between good and bad, perhaps with a third choice for ambivalent, perhaps with a last minute twist. During the course of the game, there are usually only a handful of important crossroads. Even then, they tend to only effect the climax of the game and don’t much impact on the world you spend most of your time running around.

In The Witcher 3, I never saw those gears, never felt that pressure. There are other gravities, of course. The game world is a serious place. It has weight. As does the force of Geralt’s character. His performance, my perception of him and my understanding of a given situation influence my actions in the game, not consciousness of an abstract mechanic.

Unlike most games of the type, it is almost impossible to ascertain which choice is the “good” one and which is the “bad.” As in real life, the consequences are often delayed and unexpected. Yet never once did I regret a decision or reload a saved game.

The best example of this is when I dealt with the Ladies of the Woods. I made a decision that, at the time, felt like the right one, but it had dire consequence that were impossible to predict. In many ways, I felt duped, used. This is an unusual feeling to have when playing a videogame. It made me…angry.

It made Geralt angry, too. He said he would come back and kill them all.

There was something indescribably thrilling about being in an emotional lockstep with the character at that moment. I couldn’t wait. Instead of going back to that previous save, I wanted to march on and make good on Geralt’s promise. 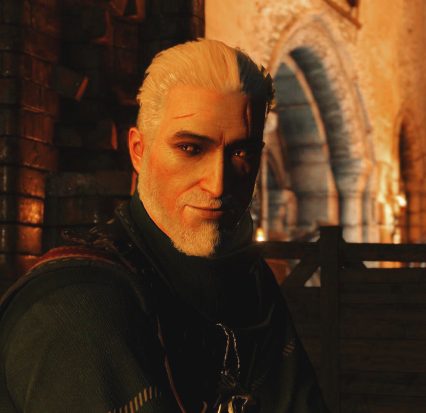 For the vast majority of the game, Geralt’s smile is thin and hard to spot.

Once he is reunited with his adoptive daughter Ciri, though, he changes completely. All the anger, all the tension he carried with him as he tracked her down drains away and he becomes happy. He dotes her. He indulges her. In short, he acts like a father. In a medium filled with flawed, self-obsessed father figures, like Booker DeWitt and Joel, who are more concerned with their execution of fatherliness than they are with the well-being of their daughters, Geralt and Ciri’s relationship is downright joyous.

In fact, most of the third act of the game is a kind of reverie acted out by talking to people, your friends met on the journey, about that journey and what still lies ahead. This isn’t in the stilted way of Mass Effect, where you visit a character in their quarters in between missions. In The Witcher 3, you are with your comrades, drinking, discussing, preparing.

You know these characters in a way that is rare for a videogame, in a way akin to the inner dialogue of a novel, but with the emotion that comes with hearing a voice or seeing a certain facial expression.

And they know you, too.