The Measure of a Beard.

Star Trek: The Next Generation premiered to mixed reviews. The cast members were feeling out their characters and setting, some of the scripts were weak and the show hadn’t quite come together by the end of its first season. Then the second season came along. Riker grew a beard, popular characters like Guinan and the Borg were introduced, and, most importantly, the show began to find its voice. In the annals of TNG history, the second season’s ninth episode, “The Measure of a Man,” is widely regarded as one of the series’ best episodes. Indeed, some even consider it to be the first truly great episode of the series.

Does Data have the same rights as his fellow shipmates, or is he property like the ship’s computer or a toaster?

Written on spec, “The Measure of a Man” was Melinda M. Snodgrass’s first TV credit. Selected during the writer’s strike of 1988, the script was shot as it was originally written. Ms. Snodgrass used her background as an attorney to tell a classic Star Trek story within the confines of a courtroom. The episode forces Picard, Riker and the audience to ask themselves if Data is truly alive. Does Data have the same rights as his fellow shipmates, or is he property like the ship’s computer or a toaster?

The premise is deceptively simple. A Starfleet scientist, Commander Bruce Maddox, wants to disassemble the Enterprise’s resident android (not to mention operations officer), Lt. Commander Data. Maddox intends to learn more about Data and hopes to create more androids like him for Starfleet. Captain Picard, Commander Riker and Data find flaws in Maddox’s plan to disassemble Data as Maddox has not even been able to replicate Data’s “brain.” If Maddox disassembles Data, he runs the risk of Data losing the context of all his experiences since coming online. Riker calls the plan “a little vague on the specifics.”

The episode begins with Riker, Data, Dr. Pulaski and Chief O’Brien at the officers’ poker game. Data has read every book on the game and he believes himself completely prepared. Riker, however, bluffs Data into folding. When Data realizes that Riker had no useable cards in his hand, Data, an artificial life form, learns something new. Despite his book learning, Data has not mastered the nuances of bluffing, and thus missed the context for Riker’s winning play.

It’s a subtle moment, illustrative of one of philosopher John Locke’s ideas. “[A] man begins to have ideas,” he says, “when he first has any sensation.” Locke argues in his An Essay Concerning Human Understanding that:

What Locke is basically saying is that the mind itself has no ideas and that our senses — sight, hearing, taste, touch and smell — all inform how we see and understand the world around us. They provide context for our experiences, an ability Data clearly shares with his human shipmates in the opening scene.

After Maddox makes his intentions known, Picard, Riker and Data go to Captain Phillipa Louvois, the newly appointed sector Judge Advocate General (and an old flame of Picard’s) to fight for Data’s rights as a sentient being. But Commander Maddox has Starfleet behind him. They, like Maddox, see Data as property and want a Data for every ship in the fleet. Unfortunately, just because Maddox is closest to replicating Data doesn’t mean he’s terribly close at all. Captain Louvois agrees to hear Picard’s case that Data is alive and has the same rights as every Starfleet officer. She appoints Picard as Data’s counsel and Commander Riker as Maddox’s legal representative. At first, Riker refuses, but when Louvois threatens to rule summarily in Maddox’s favor, Riker agrees to act as opposing counsel. Riker is now torn between his loyalty to his friend and his duty to Starfleet. 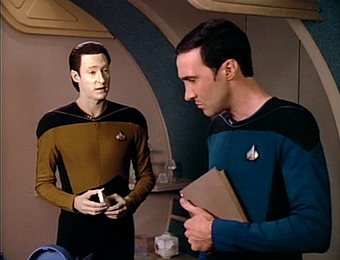 Up to this point in the series, Riker was always the stalwart first officer. In the first season episode “The Naked Now,” Riker resists the effects of a virus that simulates intoxication the longest, and keeps the rest of the crew functioning as best he can. Jonathan Frakes’ portrayal is driven, but genial right from the first episode. While he’s stern with Wesley Crusher throughout the series, he is still appreciative and encouraging of Wes’ desire to be a productive member of the crew. He’s always quick to make a joke with his fellow shipmates. He closes his first conversation with Data by saying, “Nice to meet you, Pinocchio,” with a smile.

“The Measure of a Man” is the first time Riker’s character is truly challenged. On one hand, if he did nothing, Data would be lost, but the only thing he could do for Data was to zealously fight to have Data remanded to Starfleet as property – to take away Data’s rights as a sentient being, something Riker knew was wrong. However, he couldn’t just let Maddox take Data. He had to take the risk. The new depth of Riker’s character paves the way for future episodes like “Chain of Command,” “The Pegasus” and the TNG classic, “Best of Both Worlds.”

In a scene earlier in the episode, Data is packing his things, anticipating his departure from the Enterprise. Maddox enters the room unannounced and begins rummaging through Data’s belongings. Noticing a collection of Shakespeare’s sonnets, Maddox reads from Sonnet 29: “When in disgrace with fortune and men’s eyes / I all alone beweep my outcast state.” He asks Data if he fathomed the meaning of the words. Data’s reply to Maddox said it all: “Is it not customary to request permission before entering an individual’s quarters?” Clearly, Maddox does not consider Data a person, worthy of customary respect.

Shakespeare’s sonnets played with preconceived notions about love and gender, as Shakespeare swapped the traditional gender roles portrayed in Francesco Petrarch’s sonnets from two centuries earlier. And while this episode doesn’t approach gender, it does question the viewer’s preconceived notions on what constitutes life and personhood. Sonnet 29’s place in this episode seems deliberate, and much more thought out than when the subject was broached in the previous season’s episode, “Datalore.”

The first season episode showed just why Data was made to evolve. When speaking about his and Data’s creation, Data’s brother Lore blatantly states that he was “made perfect” but he was “so completely human” that the humans around him were “envious.” That’s why Dr. Soong, their creator, built Data. Data had to learn; to experience the world with context. While “Datalore” quickly devolves into b-movie sci-fi tropes, it introduces this idea, revisited more effectively in “The Measure of a Man.” 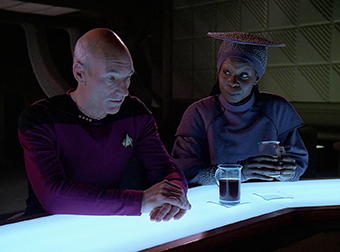 At the hearing, Riker presents his case first. Since he knows Data so well, Riker is quick to point out all the things that make Data different from other sentient creatures, specifically humans. Under oath, Data recites the speed and storage capacity of his brain, shows off his abnormal strength and then allows Riker to remove his right arm so Captain Louvois can examine it. Riker’s last motion chillingly echoes his and Data’s first meeting: he reaches behind Data and presses Data’s “off switch.” As Data slumps over, Riker declares to the court, “Pinocchio is broken.” The implication is devastating to Picard’s case. What sentient being has an off switch?

In the next scene, Picard and Guinan discuss Riker’s apparent coup de grâce. In a superb exchange between Whoopi Goldberg and Sir Patrick Stewart, Guinan guides Picard into realizing that the case isn’t only about whether or not Data is alive: It’s about how, if Data is capable of becoming alive, his status as property becomes tantamount to slavery.

And so, Picard makes his argument in court. “Starfleet was founded to seek out new life,” he says. “Well, there it sits. Waiting!” Even Maddox is taken aback by this line. Data wasn’t beholden to the rules of human (or any other known) biology; he was a new life form, not to be studied and mass-produced like a machine.

Later, Riker stands alone in the Observation Lounge. Data comes in and inquires why Riker isn’t in attendance at his victory party. Riker rather solemnly tells Data that he feels he doesn’t deserve to be there because he was “that close” to winning the case:

Data: Is it not true that, had you refused to prosecute, Captain Louvois would have ruled summarily against me?

Data: That action injured you, and saved me. I will not forget it.

Data: Not yet, sir. But with your help, I am learning.

The closing dialogue between Data and Riker bookends the episode perfectly. In the beginning, Data learned from Riker, and now the roles are reversed.

Last December, Stewart spoke with EW about the second season Blu-ray release. When the interviewer asked about “The Measure of a Man,” Stewart responded, “I do remember feeling when that episode came out that we were going right to the heart of the fundamentals of the Star Trek philosophy and what Gene Roddenberry had been writing about in different ways from the mid ’60s.”  Later, he went on to say, “[It] was a complex situation, and one that required intelligent reasoning and argument. Both sides had cogent reasons for believing what they did.”

I can’t argue with Sir Patrick. “The Measure of a Man” is the episode where philosophy was, if not expressly mentioned, applied to the characters and story more effectively than in any other prior episode. It set a new bar for the series – a mark of maturity, like Riker’s beard.

In A Treatise of Human Nature, philosopher David Hume wrote, “There is no impression nor idea of any kind, of which we have any consciousness or memory, that is not conceived as existent; and it is evident, that from this consciousness the most perfect idea and assurance of being is derived.”  Data’s own assurance of being was on full display in the episode’s first scene and if not for Picard and Riker’s dueling philosophies, the idea of Data as new life wouldn’t be as fleshed out as it was in this episode. Maddox wanted to measure the immeasurable – and this led the cast and crew of Star Trek: The Next Generation to boldly go where they had only lightly treaded before.

@IanGonzales is not a wise man, but with your help, he is learning.