My introduction to turn-based strategy games was Panzer General. I’m sure I’m not the only one in this boat, moving my tanks and units across the map, worrying about ambushes and trying to find the optimal spot to fire. From there, I went nuts. I played tons of East Front I and II, West Front and anything I could get my hands on with the letters SSI emblazoned on the box.

Of course, time moves on. Turn-based games fell out of favor, with the race for new graphics and attention-grabbing action. I became pretty good at Counter-Strike and joined a successful team, which meant I had to practice a lot. That combination put an end to my grognard wargaming, at least on a digital level. 20 years later, though, I’m once again obsessed with turn-based strategy wargames.

There’s this publisher named Slitherine. I hadn’t paid a lot of attention to their releases because, well, they didn’t hit my radar. I haven’t followed strategy on a serious level in many years. Through happenstance, a friend bought me a copy of the Proxy Studios game Warhammer 40,000: Gladius – Relics of War, which was published by Slitherine. Much like every other Warhammer game, it has an intensely long and unwieldy name, but unlike many of the other 40K games, the design is quite elegant. 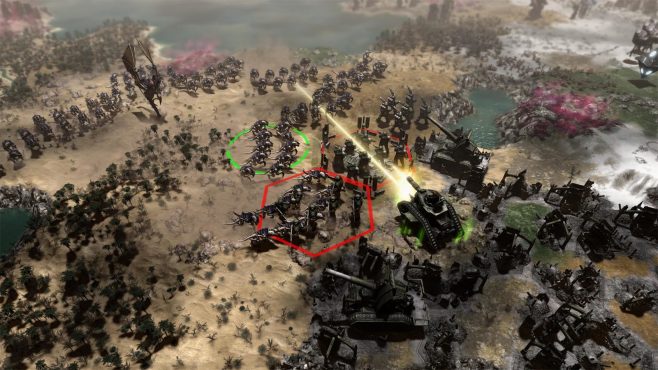 First, the story and conceit for the game is that the planet of Gladius was peaceful until Imperial archaeologists uncovered ancient relics. This discovery awakened two forces, thrusting the planet into war. Now, several forces vie for control of the planet and the power within. Thus enter the various factions.

Gladius is billed as a 4X game, but I’m not sure that paints an accurate picture. When people think about 4X games, they usually picture something like Civilization or Stellaris, but that’s not really what we have here. The major difference is that Gladius has no diplomacy layer; it’s not called be-friends-hammer. Beyond that, the flavor belongs to the different factions – all of which play differently.

The overall game will be familiar to strategy fans. The map is made of hexes, with only one unit able to be present in a hex at a time. Units can move through other units, but not stop on the same space. Each unit has a certain amount of move per turn and one action. Moving any distance ends your move. The actions can be any normal action or an attack. If units didn’t attack on their turn, they are considered on overwatch and will fire on any enemy that attacks them or a unit in their range. After an enemy dies, units within three hexes of the unit that fired the killing blow gain experience based on the enemy level. Units gain ranks, which in turn gives them more hit points and attack damage.

In the initial release, you could play as Space Marines, Orks, Necrons and Imperial Guard. Since release, the Tyranids and Chaos Space Marines have been added via DLC. Much like the popular board game design mechanic for strategy games, each player is playing their own game while playing against the other players. Let’s look at a couple of examples. 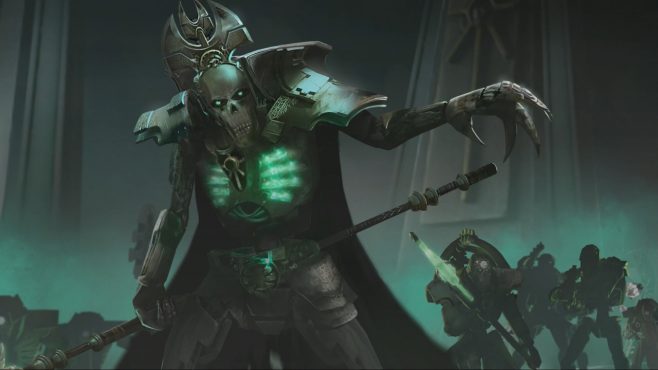 While playing Necrons, you can only place cities on very specific spots. These spots represent the tombs of their old civilization. This creates a very specific building condition for the Necrons, which is necessary for balance as the Necrons early units are very powerful compared to most of the other starting armies. As the Necrons, you have to be very aware of the locations you can build and keep your cities very tight, with little waste, as well, because you don’t have the option to expand as readily as the other factions.

Unlike the Necrons, Chaos can build cities anywhere, they just cost more per city. One of the interesting mechanics for the faction is that, as your troops get boosts and more powerful thanks to certain buffs, they also have a chance to transform into a Chaos Spawn. Chaos Spawn are fast-moving scout units that are relatively cheap to produce. You have a badass champion who has a lot of cool items but suddenly that champ is now a cheap Chaos Spawn! You have to weigh the rewards against the risks and the possibility of losing those troops.

There are many other examples between the factions, but these give a quick idea of the differences in gameplay. On top of the way they play, there is also a quest chain that can lead to a victory without crushing all your opponents. The questline is long and not easy to complete, but it does offer another path to victory if your game degrades into a Gladius-style quagmire.

That’s the game, from a mechanics level, and is very reminiscent of the games I grew up loving. With all of that said, I still haven’t touched every part of Gladius that makes it a great game. From the aesthetics to the outstanding writing, this game has completely entranced me. It’s such a tight design, so devoid of fat, that breathes a breath of fresh air into something I thought long dead.

I rate and evaluate a lot of games and have been doing so for going on 20 years now. It sounds great, and it is, I love what I do and I love games. That said, it’s easy to become jaded or burned out. When a game can remove me from my critic mode and put me solidly back in fan mode, I consider it a success. It’s very rare that I experience what I did with Gladius – I lose track of time playing it. This is the highest level of endorsement I can imagine.