On the surface, you’re playing an rpg/management sim about running a school for future heroes.  It’s fairly standard fantasy fodder, as far as the plot goes. The queen of Valthiria has appointed you to serve as the principal of your alma mater, assigning one simple task to you: take a school that doesn’t even have a roof and turn it into the greatest academy for heroes in the entire queendom.  How you go about accomplishing that task is entirely up to you.

Honestly, I enjoyed the mechanics of the game.  The combat was fun if you switch up the party members, you need to take some time to develop a legitimate strategy for how to build your school since difference facilities give different combat bonuses, and the story does a good job of keeping its head down and letting you focus on running your squads of heroes as they undertake various missions.  If that was the sum total of this game I’d probably recommend picking it up on sale. But there was one very important mechanic in Valthirian Arc: Hero School Story that violently jerked me out of my immersion, prompting unwanted introspection and forcing me to acknowledge what an absolutely wretched excuse of an educator I truly am.

You see, every 6 months your academy has a graduation ceremony.  Your graduates get a darling little hat and proudly strut across the stage, there’s pomp and fanfare, and then they go on to live their lives beyond the walls of the academy.  Sounds cute, right? Well, remember how you only have this job because you were appointed by the crown? The queendom has certain expectations for your school that you are consequently beholden to, and one of them is graduating at least one student every ceremony, in exchange for ample financing and growing your institution’s renown.  Considering that some missions can take 3-4 weeks, those 6 months fly by shockingly fast.

You simply cannot ensure that every student reaches their maximum potential and still fulfill the queen’s expectations.  All students begin as level 1 apprentices, with the max level cap raising each time your school’s accreditation rating goes up.  Once they hit level 10, however, you can choose whether to promote them to a new class or graduate them (though withholding that choice until they hit their maximum level yields better rewards).  But if you promote them to a specialized class (mage, scout, etc) then their level resets. This was the part where I began to lose my soul.

Instead of working to maximize all of my students’ potential, I began weighing their worth by their stats.  It became a matter of seeing who would make the cut and who would have their academic career cut tragically short.  And none of them were particularly awful; some of them, through no fault of their own, were simply less talented, less dexterous, less something than their peers.  And for that they were given a fancy piece of paper and shown the door as soon as I needed to slap a graduation cap on someone to keep my doors open.  The queendom might give you a bit more reward for graduating higher level heroes, but at the end of the day it’s more about proving that you can graduate someone than raise a proper hero.

Perhaps if the questionable behavior had stopped there, then I might have kept my personal belief that I was not a truly horrible person.  But then the school expanded, the number of students I could accept increased, and the missions became longer. Ensuring I met the demands of my queendom as well as generated sufficient renown and funds to keep my facilities in top condition required certain moral compromises.  Suddenly I was sending level 3 apprentices on missions with level 10 paladins to quickly raise their levels enough to graduate in just 2 or 3 missions, while the higher level, more capable students were kept around to accomplish greater deeds for my school. I even began taking in particularly worthless hopefuls to diminish my guilt over shoving them through my educational system, trying to justify that from the start they clearly weren’t cut out for advanced studies, so what was the point in berating myself over it? 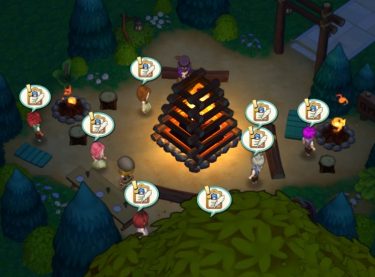 Pictured: hopeful pilgrims to my school who have no idea why they were really admitted.

I tried to assuage my guilt.  It’s for the good of the school, I’d remind myself.  These peasants had been nothing before they came to my academy, and some of them simply didn’t possess the raw talent necessary to ascend to more specialized training.  Their hurried graduation from my academy would generate more profits and renown that would allow us to grow bigger, purchase better supplies for the other students, and overall ensure that we could stay operational for years to come.  I tried not to think too hard about how quickly my students had transformed in my eyes from future heroes into simple revenue sources for my own operations. How I’d begun to saddle weaker students with stronger ones, holding back the potential of my higher-level pupils in order to drag a few more souls across the school system’s finish line.  Was it worth cutting Caro Lin’s academic potential short, just so I could afford to level up the training ring for my knights?

Yes.  And I feel terrible for it.

In the world of Valthirian Arc: Hero School Story, your students do not matter.  Their potential as individuals does not matter. The good they could bring to the queendom, improving the lives of the people around them while defending their home from internal or external threats does not matter.  They’re simply a means to an end. I wasn’t raising students to become worthwhile members of society, I was fattening up hogs for the slaughter. I came up with the most arbitrary reasons to reject students or graduate them early.  I honestly can’t tell if this game transformed me into the antagonist from an Assassination Classroom-style anime or just an administrator from a normal public school in the U.S.  I completely and utterly compromised my principles as an educator while playing this, all in the name of being able to purchase a few more fancy buildings and statues.

But lord, doesn’t my campus look beautiful for it.

Dysfunctional Systems is about bringing order to the world

Fire, Loss and the Works of Hands