Amplitude is a visual novel that is awful on its own and worse in comparison to its immediate predecessor.

Something seemed suspiciously familiar about Amplitude when I stumbled across its Steam page. The artwork reminded me of another visual novel that I’d read a few years ago called Freak-quency, a game so flawed and unpleasant that it didn’t even merit a stand-alone review when I forced my way through it. Amplitude is a sequel to Freak-quency, a fact that the lemmasoft page wants to make abundantly clear while the VN itself won’t shut up about how amazing the in-universe Freak-quency lore is. It’s clearly inviting you to draw comparisons between the two games, and who am I not to indulge?

Let me begin by saying that Amplitude is a heavily flawed time management sim, nothing can change that. The visual novel starts out with a montage of people killing themselves or being murdered, followed by a cliche make a deal with a devil scene to revive all of them. You pick whether you play as a man or woman stuck in another man or woman’s body (along with their soul) and are tasked with figuring out who killed you and why. Amplitude stumbles right out of the gate here, informing you that your spirit can stay in its new body for about a year (aka about the normal amount of time you’d expect to pass in this genre).  However, the VN quickly reneges on this inferred promise by crunching your timeline down to a measly six weeks.

If you’re thinking that it might be difficult to simultaneously flush out your stats and experience a worthwhile narrative in a six-week-long time management sim, I’d have to correct you and say that it’s impossible. The writing is so-so at the best of times and utterly pointless and baffling at worst. Character and world-building descriptions all too often come across as clunky and unnatural, while the exposition is rushed and bloated.  In the span of ten minutes I was informed of the following: that this world’s population is divided into people that do or do not have superpowers; that there is a syndicate running around murdering non-powered humans while other rebels are deliberately murdering superpowered people; and that all young people living in this thinly-veiled X-men knockoff are assigned robotic companions which restrict their activities and murder them if their host becomes too dangerous. And this was after finding myself the chief inspector of my own murder investigation, since there is not a cop to be found in this entire city. Holy lore dump, Batman.

Amplitude tries to cram far too much story into an inexplicably miniscule timeline. This is a murder mystery combined with political intrigue, dating sim and time management facets to produce an unholy chimera of incompetence. What pains me the most is knowing that if they’d expanded their timeline even to six months instead of six weeks, the writer could have flushed out those details with far better execution. There is no down time or chance to process in Amplitude, only frantically sprinting from one plot point or mission to the next in a desperate race to finish as much as you can (certainly not everything you’d like to) before the 8th of May. This isn’t just a personal complaint, the entire story suffers for this lack of pacing. Most egregiously, you’ll often stumble across *very important* characters at pivotal moments in the narrative, whom you have never met yet are clearly supposed to know. Perhaps I might have run across literally any of them if I didn’t have to be so hellbent on visiting the cafe five times in four days just to get part of a disguise, for example.

It doesn’t help that so much of the main plot is utterly bizarre to the point of being almost incomprehensible, so even when you’re able to stay on top of things it’s not always clear what’s happening or why. At one point while playing Jon’s route I found myself in the halls of a blood-splattered hospital, thanks to a robot nurse going on a murderous rampage. That much was fine and honestly a bit unsettling, albeit clearly borrowing from the Silent Hill series. But then there’s a twist with a bad Joker knockoff being the one behind the murder spree who only made it look like the robot went crazy. Then there is another twist, when the villain is revealed to be your best friend who actually only staged a murder but really teleported everyone to a different hospital first. Then there is yet another twist to reveal that best friend was actually being blackmailed by the syndicate after his mother was kidnapped, but in a fourth twist in this matryoshka doll of clunky writing, his mother was actually a different friend’s mother in disguise. Picture around two hours of that level of writing, and you’ll have a fairly good idea of what I had to trudge through.

There was no time to breathe and absorb the story’s twists and turns, completely ignoring the fact that Amplitude needed an editor more than a suburban housewife needs a mimosa with her brunch special. Comparing it directly to its predecessor, I can say that Amplitude at least worked to make its characters slightly more sympathetic and nuanced than Freak-quency did, but made the calamitous mistake of assuming that more character development was also license to add more shoddily cobbled together plot, effectively cancelling out any net improvements to the series. 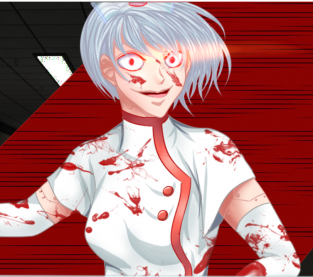 What really kills me is how much I enjoyed the time management elements of Freak-quency compared to Amplitude. Maybe Freak-quency sometimes rushed through moments of growth or world-building, but at least I was given time to wander around town and process while developing Sonnya as a person. My relationships took effort, and my abilities were cultivated slowly but surely. Amplitude’s ultra-condensed time frame meant I was constantly bouncing from mandatory task to major plot point to a date with my chosen romance option, with absolutely no room for error. No part of Amplitude was enjoyable to me as a player. This wasn’t fun, it was stressful and practically mandated save-scumming my first few playthroughs until I broke down and used a guide to optimize my endings. Somehow they stripped away the most enjoyable parts of the game in exchange for scenes I will never read and characters I will never bond with because I do not have the time for them. Good god, it’s like being a dad of three small children at a buffet on Sunday and desperately trying to pile food on their plates with satisfactory variety and speed before the church rush hits.

I wanted to like Amplitude. I wanted to praise the VN for better art, better music (even if the voice acting still cut in and out worse than a plot-relevant phone call in a cheap action movie) and more character development.  But the execution is rushed, the morality of your supposed allies is questionable at best (one friend has the power to turn people into sentient mochi and not only did that to you, but allowed a dog to eat and digest you thereafter), the twists are moronic and inexplicable, and it’s just not fun. Oh, and this is all besides how desperate the VN is for you to know about Freak-quency, via frequent references to Freak-quency books, comics and human/freak hybrids that are just canonical parts of the world now. This is particularly embarrassing once you consider that Freak-quency was available for free and was better executed than Amplitude, which you have to pay for.

Amplitude is available on Steam, but there are far better options out there.  Maybe the third time will be the charm for Ceylon Entertainment, but I’m not holding my breath.