I was listening to Unmissable: The Official Unwinnable Podcast – yes, that was me! – and hosts Not Sara Clemens and Not David Shimomura began talking about The Favourite with their guest, Yussef Cole.

It wasn’t long before they turned to Olivia Colman, whose performance as Queen Anne was so good she rightfully won Best Actress this year. “This is not going to happen again,” she said in her adorable Academy Award acceptance speech, but, as the podcasters pointed out, it wasn’t exactly the first time she’d struck gold.

They brought up Broadchurch. They praised Peep Show. But, in a scandal that should rock the podcast world to its very core, they somehow failed to mention her finest filmed achievement of them all.

I admit it’s quite possible they might not agree with me. But they’d be wrong:

Olivia Colman is the chick from Numberwang.

If you don’t know what Numberwang is, you could search for it now on YouTube. I won’t wait though, so this column continues without you.

Are YouTubers back? If so, wipe the tears of laughter from your eyes so we can continue.

Having not done an exhaustive search – the lack of research that has become a hallmark of this column since it debuted eight years ago this month – I’d go so far as to say it’s the best game show sketch ever. That includes Monty Python’s World Forum, Chris Farley stumbling onto the set of a sadistic Japanese game show and, of more recent Saturday Night Live vintage, Meet Your Future Wife. 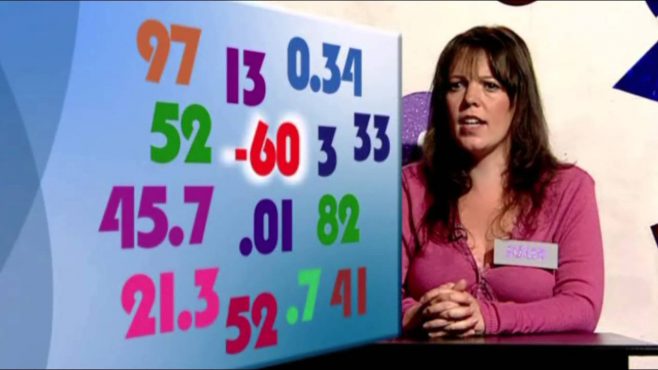 But what sets Numberwang apart is the sheer random hilarity of it, the pitch-perfect sendoff of the synthetic silliness of the whole game show experience. And the fact that, despite it being basically a one-note gag, they were able to pull off numerous iterations, including a faux documentary that traces the history of the show through the annals of British broadcasting – from the early days of the BBC through World War II and the ‘70s to the present day – and features a murderous robot called Coloson, who we learn was the first machine to crack the Numberwang code but was also equipped with advanced weaponry to help with the war effort. There is even an episode of Numberwang in German but the joke, so familiar, so fantastic, easily breaks through the language barrier.

In the show, just about everyone is a straight man. Paterson Joseph (as Simon) might be the exception, with his over-top-corniness as a contestant that in one iteration includes him asserting he does not sing before exploding into opera. But Olivia Colman, as his perpetual opponent, Julie, for the most part, comes off as earnest; she is genuinely excited to be on a game show, to have a shot at winning Numberwang.

She will say anything, do anything, even give her own life, to win a stupid, over-complicated and just plain inscrutable game. But she never lets on that it is any of those things. She gives out random numbers without an air of sarcasm, without her character’s tongue in its cheek. As she sits on the revolving stage and waves to the crowd while she disappears, the other side of the stage revealing a fleeting glimpse of a single joke as it passes by, she has the same earnest expression and enthusiastic wave when the stage continues to revolve and she appears again for Wanganom. Joseph, sitting to her left, does the same, but again he has a corniness that can betray his being in on the joke. Colman isn’t playing it nearly as self-aware.

She is so straight that, in one episode, she willingly, nay, enthusiastically enters a Deathwang! pod of sudden death after an “unprecedented” three-day-long stalemate with Joseph, in which the goal is to breathe in poisonous gas – and die first. Joseph wriggles around like a marionette as he desperately tries to inhale as much noxious air as he can. It’s how I might play the joke or any number of physical comedians would.

But Colman calmly sits there, quietly concentrating, before simply slamming face-first into the glass, stone dead.

Colman wins the Deathwang. She’s a winner, after all, and not just of Academy Awards.

Because that, podcast listeners, is Numberwang.