Us Lovely Corpses is a wonderfully thoughtful visual novel about dealing with mental illness.

Everything begins with the story of a family whose baby fell victim to a monster’s curse.  No wrongdoing was committed against a witch or wizard, no ancient curses were stirred up or invoked to bring this calamity upon the child; rather, their suffering is an example of the world being an inherently unfair place wherein bad things may happen for no discernable reason.  The monster promises one thing to the child once the curse is bestowed; that they shall never kill or maim the infant, but will simply cling to them for the rest of their life.

It is this child, Marisol, whom our hero Alejandra de Rosa must rescue years later.  Alejandra is a young witch working to make a name for herself beyond grandma’s assistant, and Us Lovely Corpses follows her first solo assignment.  This isn’t exactly uncharted territory for Alejandra; she and her grandma have spent years dealing with Marisol’s monster, which causes the house to be covered in roses and thorny vines that alternatively whisper horrific things to the home’s inhabitants and terrify the hired help.  What might come across as unnatural and terrifying to an outsider is rather all old hat to our protagonist. 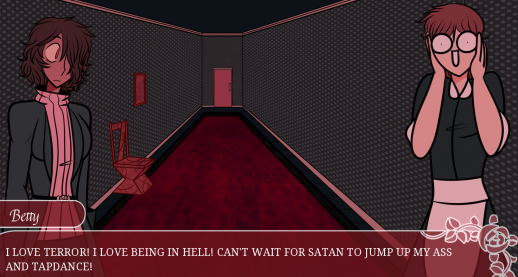 I truly love the portrayal of the monster in Us Lovely Corpses, because in this VN we see an antagonist who showcases a frightening degree of familiarity with our protagonist and vice versa.  Alejandra frequently comments on how odd it is that the monster has simply told her to leave and never return after today, given that normally she would be bombarded with monologues about the futility of her endeavors, followed by directions for puzzles to get into the attic and save Marisol, all of which was inevitably bookended by time limits designed to prevent her victory.  There’s a fantastic moment where Alejandra finds a fake-Marisol corpse in the bathtub crafted from raw hamburger and her only reaction is to basically yell, “GEE, IT’S A GOOD THING I BROUGHT GLOVES IN CASE SOMETHING LIKE THIS WERE TO HAPPEN FOR THE NTH TIME.” As the audience you can’t help but laugh at the fact that this sort of nonsense has become so customary for the pair of them.

At the same time, the familiarity becomes unsettling whenever Alejandra indicates that the monster has gone off script, implying that something about this solo venture into the manor is very different and disturbing even for a hero familiar with the occult and supernatural.  On this particular visit, Alejandra isn’t given riddles or clues as to where she can locate three keys that will grant access to the manor’s attic where Marisol is being held. Instead, she simply wanders from room to room in search of the most overgrown areas of the monster’s roses, in order to prune them away and find a key amidst them.  The monster has blatantly forsaken their normal routine, making you feel like someone who’s been invited out for dinner with a friend and you can’t quite figure out why they’re acting off-kilter all night. You know something is amiss, you know that eventually the truth will come out, but in the meantime you’re trapped in a sword of Damocles situation and desperately praying for a waiter to bring the food so you can have some semblance of normalcy to cling to.  Alejandra knows better than to fall into this anxiety trap, whoever, and diverts her attentions to discerning which roses must be cut now and which can be saved for later.

The roses themselves represent different aspects of Marisol’s life; depending on the color, one might encounter a memory of joy, grief, hope, anger, etc, depending on the symbolism tied to their coloring.  You can choose to prune these away and lock them in a briefcase as soon as you find them or hear what they have to say beforehand. There was something deeply unsettling about a monster recounting what were clearly traumatic moments for Marisol via rose mouthpiece, bracketed by ample, tangible evidence of her suffering lying around the house.  Like a memory of embarrassment over a speech impediment within the walls of a library Alejandra always envied Marisol for frequenting. Like hearing how Marisol knew she “disgusted” people shortly before you stumble upon her father’s book on what to do “when children break your heart.” Like discovering that all of her happy memories of love and affection for Alejandra are tainted by her mother’s demands that Marisol never dresses like A Woman Who Likes Other Women (emphasis mommy dearest’s, not mine).  You can hardly wonder at Marisol becoming a shut-in with a monster that’s so willing and ready to divulge her deepest secrets through whispering blossoms. All this before you even ascend to the attic.

Before we go on, let me say that it’s difficult to describe what happens next without delving too heavily into spoilers, so if you don’t want that please leave the review now and just go read Us Lovely Corpses for yourself.

Eventually Alejandra cuts the roses, finds the keys, and makes it to the attic, just as she always does. The twist (for the audience, not her) is that the monster doesn’t really exist.  It is simply a manifestation of a magical condition that Marisol suffers from and has been afflicted by since birth. As Alejandra prunes away all the flowers (excepting the one that has replaced her right eye), Marisol laments that even though the condition won’t kill her, it still makes her feel dead inside.  Most days she finds it impossible to even work up the urge to get out of bed; that’s why she couldn’t be bothered with her normal traps and twists. She’s resigned herself to this miserable fate, and her parents are coping by trying to more heavily medicate her Bipolar II diagnosis (a side effect of the magic disease) before buggering off on vacation.  Your heart breaks for this young woman who feels that her own trauma isn’t valid, because by most people’s reckoning she didn’t have a difficult upbringing. The only reason you even know about her suffering is because a magical rose wanted to whisper those things in your ear, and you chose to listen. She’s carried the burden for years; we’re just meeting her at the point that she’s about to break.

This is the moment of Us Lovely Corpses when Alejandra really shines for me.  She doesn’t dismiss Marisol’s feelings or offer useless promises of better things to come.  Marisol’s struggle isn’t some beast out of a fairy tale that can simply be beaten down with brute strength or meaningless platitudes about hanging in there because things are sure to get better.  Rather, Alejandra takes a risk and shares a glimpse into her own trauma and struggles with mental health, not to one-up Marisol’s struggle but rather assure her friend that neither of them are alone in this.  There is no way to cure Marisol or Alejandra’s conditions; their fights will continue for the rest of their lives and that is something Alejandra has had to make peace with. Despite efforts to ward off the pits of depression with good company or concerted efforts to find joy, some days will still be unbearably hard.  But knowing that you’re not alone in that struggle might make it just a smidge more bearable. It’s enough to keep our protagonists fighting for another day; sometimes, that’s all you can ask or hope for. Sometimes, that has to be enough.

Us Lovely Corpses is available on itch.io, and I strongly recommend it.

The Abominable Snow Monster from SkiFree