I have conceived an idea that, for reasons soon to become clear, I have no time to confirm is an original idea. But it’s a brilliant idea. And I’m sharing it with you now for the measly cost of an Unwinnable Monthly subscription:

Reviews of half-read books. Written for parents of small children.

Stick with me on this. I have two kids now, one or both are almost always sick, the lights go off early and, long story short, I can’t read myself to sleep anymore. Which also means I’ve been stuck about 1/3 of the way through Haruki Murakami’s 1,150-page epic 1Q84 for the better part of the past four months. And that, UM gang, is what inspired this idea, and also what compels me to write the very first Half-Baked Book Review (don’t steal this idea!), which I present to you now in all its ever-evolving glory. The Half-Baked Book Review of …

The way I see it, the reason d’être of The Half-Baked Book Review is twofold:

To determine, and thereby advise readers, whether a book is deserving enough to be read only halfway. In other words: Since you’ll almost certainly never finish the mofo book, will it still be worth it to you in some way to read only part of it?

To determine, and thereby advise readers, whether said book, being half-read, can be picked up again without missing a beat when your kids finally, mercifully, leave for college. Or whether, like George R. R. Martin’s A Song of Ice and Fire series, you’re best off not reading a blessed word of it until your kids decide to have their own kids, at which point you can, we hope, swoop in and out of their lives at a much more leisurely and enjoyable pace, leaving you plenty of time to draw mental flowcharts of which characters killed, screwed or sired each other, which ones are undead and so forth. (And, likewise, have time to steam through as many books as you desire until your reading glasses crack when you drop them on the steps of a library following what is most certainly an approaching Apocalypse.)

So, through that lens, let us review Murakami’s 1Q84. 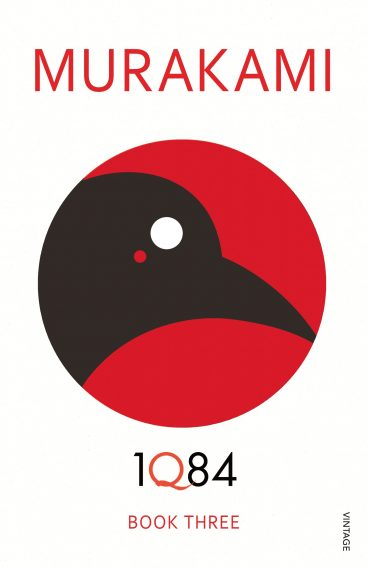 HALF FULL OR HALF EMPTY? Besides a few quibbles with the way he writes about sex, I am loving this book. Each chapter flip-flops between the two main characters – an aspiring novelist named Tengo and Aomame, a hired assassin. Connections between their worlds are slowly being drawn as we follow each of their so-far separate stories. I have my theories on what their ultimate connection will be – some of them juicier than others – but since I don’t know yet, and this review assumes you never will either, I can state categorically that I would be content to let the mystery be, although I do actually want to finish the book. To me, this is The Half-Baked Book Review sweet spot: A book engaging enough you really want to finish it, but not so engaging you’re constantly annoyed you can’t.

So what gives 1Q84 the edge? It’s not the kind of page-turner you might stay up all night reading the one chance you get, say on a business trip at a mid-priced hotel in the middle of nowhere, with a grocery bag full of Chinese food delivered to your room. Instead, the depth of the writing, the intriguing characters and the unconventional narrative set it apart and make it memorable. There have already been enough surreal scenes in the tale – the two moons suddenly appearing in Aomame’s sky, the cryptic words from a cab driver that lead her to climb down the side of a freeway – and enough mystery – who is Fuka-Eri, really, and her Little People, and what is up with the cult she emerged from? – that you could mention them in public as if you had the time to actually read serious literature still and not just Dragons Love Tacos and Dragons Love Tacos 2 to your toddler at bedtime. SCORE: HALF FULL

SCORE IN 2034: This date assumes your youngest kid is older than my youngest kid, but similar to Abraham Lincoln, I like how “score” and “four” rhyme.

Unfortunately, I do not like how 1Q84 stands up to this test.

That’s not necessarily a bad thing – this test is really hard. Also, I tend to forget the plot and characters of a book within a week of finishing it. Often I forget while I’m in the middle of actively reading. While I’d love to say a quick recap could get you back up to speed, I’m going to have to lean toward the lowest score here. Wait, why is Janácek’s Sinfonietta so important again? What is Sakigake and how does it differ from Akebono? I don’t actually know these answers yet, but the point stands: The details seem to matter enough, sometimes in subtle ways, that you’re probably going to have to begin again. SCORE: minus-575*

So there it is. The debut of The Half-Baked Book Review. The idea that will make me rich. Finally. Or at least it would make me rich, if indeed I had the time to read halfway through any other books besides 1Q84 – which I don’t.

Love you, Jacob and Peter!

*Approximate number of pages you’ll have to read again.

So the Katana is Back

Hob is So Minimalist it Disappears