Her Lie I Tried to Believe is a shoddy attempt to portray the paranoia and psychopathy of toxic masculinity as something worthy of human pity.

The main character Tim may be one of the most distasteful protagonists I’ve ever encountered in any visual novel.  In grade school Tim becomes obsessed with one single girl, Cassandra, around whom his entire life soon revolves. I don’t mean in a romantic comedy, doting on her with ridiculous amounts of presents or attention kind of way, I mean that while in grade school Tim makes it his life mission to destroy her.  What prompted this obsession? She had a certain “look in her eyes” and beat him at a race in P.E. A pathetic start to a pathetic man.

Tim’s obsession and mental instability worsens in middle and high school.  Puberty naturally gives him an advantage over Cassandra in P.E. by this point, but physical prowess isn’t enough.  Tim throws himself into his studies for the sole purpose of annihilating her during midterm or final exams, at the expense of any sort of social life.  Self-isolation only furthers his neuroses, to the point where he starts to believe that all of her actions revolve around him (e.g., Cassandra getting a boyfriend clearly means she believes it will be relatively easy to outscore Tim on exams).  At this point Cassandra left school for reasons unknown, and I for one was ecstatic because I genuinely feared for her safety.  Tim is an unhinged man who has allowed his instability to utterly consume his life, and no one around him seems to either notice or care.  There’s no sign that he is going to seek mental help, or be forcibly directed that way by either parents, teachers, or a concerned classmate.  He’s the sort of boy you would absolutely expect to turn into a school shooter or wife beater at the very least.

Years pass, and of course Tim doesn’t mature or become a better person (since, as you well know, deranged misogynists tend not to improve or grow because they don’t see any problem in themselves).  Somehow this wretched amalgamation of flesh and human consciousness manages to fumble his way into gainful employment and a drinking buddy, and he is exactly as much of an ingrate for this windfall as one can imagine.  He sees work as a boring way to fill his day where “piles of money” are “thrown at him” by foolish bosses who don’t know better. When the drinking buddy tries to take him out on a group date, Tim immediately starts downing beer like water because three of the available girls are utterly “unfuckable” until he gets a little more alcohol into his system.  He represents the worst sort of entitlement, seeing a paycheck as something that just happens to smart guys like him and that women exist only to be wrapped around his dick. 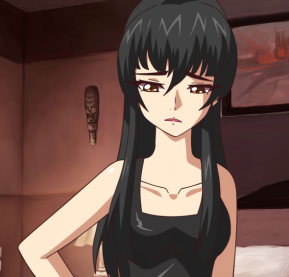 If you didn’t heed my warning at the start of the review and find mentions of sexual assault triggering, please skip the next paragraph entirely.  Cassandra is one of the group date attendees, and she asks Tim to walk her home afterwards. Tim’s hatred and obsession with besting her returns in full force.  He fantasizes at length about tricking her into coming home so that he can rape her, stripping away her “purity” in an attack that she could never undo. Thankfully he calls her a cab instead, (one of the overarching themes of this story is that he can never actually “beat her” in anything, after all) but I was legitimately terrified for her safety until that moment.  In case there were any lingering doubts, Tim should now be viewed as an utterly irredeemable monster, and I was sincerely hoping that Her Lie would take us on a journey of his living life as a toxic failure until he dies alone and unloved. Unfortunately, instead of getting anything remotely in the ballpark of “misogynists are bad,” we get a fucked-up romance that really necessitated stronger alcohol than what I had available the night I read this.

More time passes, and Tim meets Cassandra again while she’s working at an upscale club as a hostess, and (being an absolute paragon of kindness and understanding, of course) immediately begins internally judging her for being a whore who fucks rich men for money.  He pays to take her up to a room and have sex, which of course turns violent. It’s ok though, because as it turns out, Cassandra wants him to be like that with her. This was the point I knew things were going to go terribly wrong.

I would have preferred it if the story had completely devoted itself to making Tim a terrible person who remains overtly irredeemable from start to finish.  Perhaps then we could have cobbled together some sort of moral about entitled misogynists always being awful, and no attempt should be made to connect with or forgive them under any circumstances.  Instead, the story now attempts to become romantic, as Tim forms a pseudo-relationship with Cassandra (while he’s still dating another woman) and begins to become attached to her. It escalates to the point where he actually skips town with Cassandra because he thinks it’ll save her from a debt to the mafia.  It’s the worst possible evolution of pigtail pulling, implying that for all these years his hatred has actually just been a mask for affection towards Cassandra. Cassandra sticks with him, utterly uncaring of the physical and emotional abuse that comes with it. In fact, it’s Tim that starts to feel bad about the damage he’s doing to her.  So after an hour spent establishing that he’s a toxic danger to the women around him, we’re now supposed to feel some sort of understanding for him. As disgusting as trying to elicit sympathy for an abuser might be, nothing compares to the train wreck of Her Lie’s ending.

I don’t care that I’m spoiling things; in fact, I’m actively hoping that you learning the ending is enough to convince you not to download Her Lie and read it.  The huge climatic twist of the VN is that Cassandra was actually just as obsessed with destroying Tim this whole time, a fact that she reveals to him in a note left on a bedside table right before she hangs herself.  That’s right, this whole abusive week-long relationship was the ultimate culmination of her plan to destroy him via making him fall in love so she could take that away from him.

I can barely even begin to cover how problematic this ending is.  It validates his lifetime of paranoia by establishing that Cassandra was just as eager to ruin him, so he was right to try taking her down.  It negates any sort of agency or individuality that Cassandra has as a person, because as soon as she feels like she’s won she kills herself rather than trying to live her life beyond her obsession with Tim.  It tries to portray Tim as some sort of tragic lover who now has to live with heartbreak, despite the fact that he spent the overwhelming majority of his life trying to find some way to beat Cassandra, sometimes literally.  Abusers deserve no redemption, and it’s abhorrent that Her Lie tried.

Her Lie I Tried to Believe is available for free, but so is influenza.  I would recommend avoiding both.