I might have gone too far this time, friends. In my quest for solitude, I’ve bid farewell to the tranquility of the previous two entries in this column. At an unspecified point after midnight, I found myself huddled in front of a monitor, bracing myself against the roar of nothingness. The only soundtrack was the clacks of my mechanical keyboard inputs. I was playing Duskers, a game in which you pilot drones through derelict spaceships. The galaxy is dead and I was alone.

Duskers is a game in which you input command lines to control a team of drones, which you’ll come to know well by their designated numbers and tools. For instance, d1 (affectionately known as Roy) has a motion sensor while d2 (Hayley) can power generators. Each transmits a grainy image of their immediate surroundings back to your screen. It’s a world of wireframe figures on black schematics and the haunted, decrepit corpses of haulage vessels and silent prisoner barges. Broken down mausoleums that contain the fuel you so desperately need to continue your journey and horrors that hide in the static.

There’s a lot about the world of Duskers that you don’t know. You’ve survived where others haven’t. The garbled ship logs hold no answers. All that’s left are the remnants of a space-faring civilization that has presumably fallen to some great catastrophe. The scale of the game is huge, traveling through star systems and across galaxies. Every ship you dock with is some looming industrial hulk with government or military classifications. They’re large and utilitarian. Your team of drones is the only tools you can employ to scramble half blind through mazes of debris-strewn rooms. 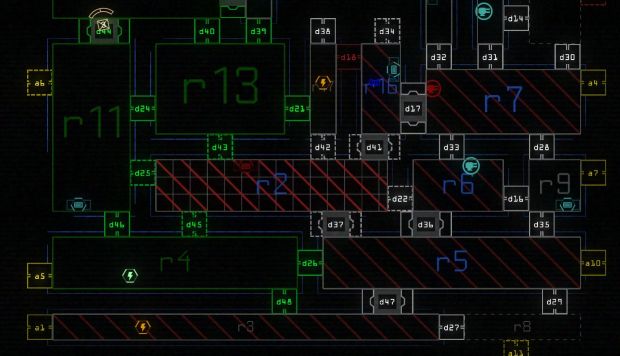 In the face of all of this, Duskers manages to exude a sense of confinement. That’s because the stage upon which the game is set is so abstract. Perhaps more so now than when it was released in early 2016, Duskers taps into the feeling of loneliness that can come from navigating strange spaces, be it broken down star freighters or the hurdles of everyday modern life. How often is it that you can see great events happening, but always seemingly several steps removed from where you happen to be? Those power structures that are so massive and bigger than any individual, yet despite their size and impact on the world remain intangible and distant. So you’re left reaching for something to anchor yourself to.

In the game, travel between two points on your galactic map is instantaneous. The derelict ships are recognizable from their form and the scant information you read on your monitor, but you cannot know them. Their rooms are green grids with imaginative names like r1 and r2. It’s only when you come out of the command view, which provides you with an ever-expanding schematic view of the derelict and zooms down to a drone’s limited field of vision, that the space becomes appreciable.

On the one hand, it’s a resource gathering game that requires you to boost generators to unlock doors and source the requisite fuel and scrap while avoiding danger, but on the other Duskers is about navigating the grand indefinite through simple, but direct actions. There are no mouse controls in Duskers and it doesn’t have controller support. It’s a game constructed around the feeling of isolation and putting the player wholly within the experience. Every action you take requires you manually punch in a command line. This tethers you directly to your drone, which in turn connects you to the space beyond your monitor. You might be lost in space, but that all melts away when you’re plotting out the individual steps needed to get out of a rig with all of your drones intact and loaded up with the spoils of your excavation.

Where you’re going or what you’ll find at the other end of the galaxy becomes less important than the question of how many more ships can I search before I’m in trouble? Do I scrap one drone to fix my motion sensors? Can I afford to buy that new winter coat I need? How worried should I be about those radiation levels? Things can and will go wrong. While you have to plot every action individually and form some kind of action plan to get you from A to B, you’ll still need to react to changing situations on the fly. Is there anything you’ve overlooked, or a door you’ve foolishly left opened and without the power needed to close it again? While you see the results of your commands instantly, just like in real life aftershocks ripple across time and down the chain, before unexpectedly slamming home. So you keep punching in those command lines one at a time, adapting as you go and hoping for the best.