Back when we were young, my friends and I would gather round a dining room table to play Dungeons & Dragons. It didn’t matter which dining room table. And really, any flat surface would do – we played on basement bar tops and with books in our laps in living rooms and on the floor if no better locale presented itself. Our parents would go about their business, largely ignoring the baffling jargon streaming out of our mouths. Better that than roaming the neighborhood getting into trouble.

Enthusiasm was high at the time for R.A. Salvatore’s Icewind Dale trilogy. Set in D&D’s Forgotten Realms, the books featured one stand-out character, Drizzt Do’Urden. Drizzt, if you didn’t know (high odds, I bet), is a bit of a D&D superhero, a renegade drow (black skinned, white-haired, generally evil elves who live underground in vast cities dedicated to their wicked spider goddess) ranger with a good heart, loyal friends and a magical pet panther. Drizzt inspired our group to play an alarming number of rangers in those days, not, I think, due to any particular facet of his character, but rather because he dual-wielded a pair of magical scimitars, Twinkle (lol) and Icingdeath (what?).

Silly names aside, there was a lot of talk about scimitars around the table and some of our number were a little unclear on how to pronounce the word. As a highly educated reader, of course, you know that the ‘C’ is soft, as in ‘science,’ but my friends at the time pronounced it with a hard ‘C,’ as in ‘skim,’ and truncated it to a two-syllable word. Skim-tar. This went on for months and any attempt I made at correcting this failed miserably (no one likes a pedant, even when you’re in junior high).

This went on for months and any attempt I made at correcting this failed miserably (no one likes a pedant, even when you’re in junior high).

One day, we were playing at my dining room table. My mother was watching Jeopardy! in the adjacent living room. Mom had (and still has, point of fact) a two-fold reputation among my friends, first as a walking encyclopedia, based largely on the merit of her skill at questioning Alex Trebek’s answers, and second as a quiet, pleasant sort of lady who baked them cookies on a regular basis.

That evening, my friends skim-tarred one too many times and my poor mother couldn’t take it anymore. From the other room, she shouted, “Scimitar!” with a soft ‘C’ and three syllables, over and over again. There was a weak protest from my friends for a moment, but having this normally soft-spoken woman now threatening to get out a dictionary silenced them. Skim-tar has never been said aloud in seriousness in my house since. I can’t speak for my friends, but for me, it is a more vivid memory than anything that happened in the games we played back then.

This whole episode is even more amusing in the context of Dungeons & Dragons, where names and words are made up entirely, with no attempt at internal logic (say what you want about Tolkien, at least he bothered to build a language out of his made-up words). If we couldn’t handle scimitar, how on earth could be expected to pronounce Drizzt? Back then, we said Driz-ZIT. These days, Drist is in favor, because, I think, it is too silly sounding to buzz the Z’s. And, despite knowing better, I still hear Driz-ZIT in my head when I read the name.

My co-host on the Vintage RPG Podcast, John, is notoriously bad at pronouncing fantasy words. He knows it, and he doesn’t care. More power to him. Fantasy words are nonsense, an attempt to convey a bit of atmosphere or character through an unusual sound, if spoken, or a curious collection of letters, when written. There isn’t a real right or wrong way to say them since they don’t adhere to the conventions of any real system of language – this is even true of Tolkien. When we gather round the table to roll dice and agree that Menzoberranzan is pronounced a certain way, it isn’t about correctness, it is about building a consensus that allows us, mostly, to know what we’re all talking about. Correct, in this case, is often at odds with fun.

Which brings me to Assassin’s Creed: Odyssey, which I have been playing of late. Set in ancient Greece during the Peloponnesian War, the thing that struck me most (aside of the number of question marks on the map I need to tidy up in assassin/janitor fashion) was the language. The age of Greek myth, or, at least, the historical events that inspired it, is still very much on the mind of the characters of the game. Heroes like Odysseus and Theseus come up in conversation regularly. As is often the case in Assassin’s Creed games, a number of historical figures like Herodotus turn up, too. Not one of those names are spoken in the game the way I have always pronounced them, much to the annoyance of classical language scholars, no doubt. 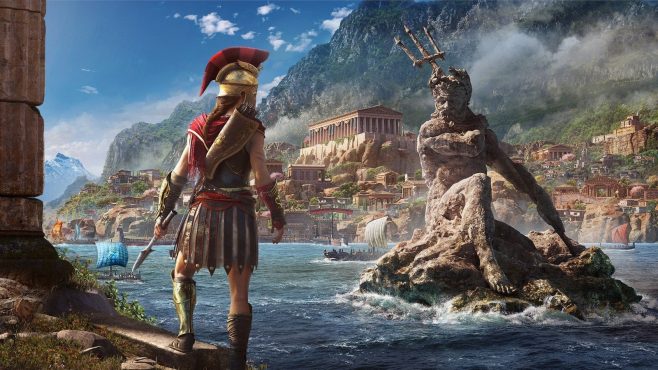 Take Theseus, he who slew the Minotaur and was a royal jerk to Ariadne. I say THEE-see-es. Merriam Webster offers up that pronunciation and another: Thee-SUHS. Odyssey does it a third way: Theh-SAY-oos, with the first syllable rather short and the middle one lilting up, as if it were hiding a question inside (sort of pronouncing the vowels in the Latin manner, but not quite). The game pronounces Herodotus in a low, staccato, with every syllable carrying the same emphasis – Heh-rod-do-tos – in a way that I can not make my tongue imitate and which led me to initially believe I was dealing with a person who was entirely different from the father of history.

My first reaction was that Odyssey is just wrong and Ubisoft is being a poor custodian of history. And, that is probably a fair concern – the game is likely to be the first exposure to ancient Greece for a great many people. But, like fantasy words, I find aiming at being correct is perhaps at odds with other goals the game is attempting to accomplish. As I settled into the game, I found my brain reacting positively to the new pronunciations. Right or wrong, it made me feel somehow more open, in a way similar to how Origins removed some of my romanticized ideas of how ancient Egypt might have been just by letting me run around spaces I thought I knew. We don’t have any way to know how ancient Greeks spoke, so if making these digital Greeks talk weird enables the game to challenge my preconceptions in other areas, I am all for it.

Is there a right way to say scimitar? To my mom, living in the real world, certainly, but in the context of us playing a game about stabbing monsters with magic, it was a firmly secondary concern. A long time ago, there was a proper way to pronounce Theseus, but surely there are more interesting things to glean from history now.

Stu Horvath is the editor in chief of Unwinnable. He reads a lot and spends his free time calling up demons. Follow him on Twitter @StuHorvath.

Surviving a Dead Galaxy in Duskers