I’m in love with this comic series right now. It’s a Western, in which a war veteran and an Indigenous girl team up with a motley crew of eccentric frenemies to track down a stolen hoard of gold. It’s part history lesson, part turn-of-the-century foodie travelogue, exploring colonialism  and the dawn of the modern war economy.

It’s a manga called Golden Kamuy and, I don’t care who you are, you should be reading it.

Golden Kamuy is set in 1905 and follows Russo-Japanese war veteran Saichi Sugimoto, known as Sugimoto the Immortal because he survived one fatal charge after another on the infamously deadly Siege of Port Arthur. Now that the war is over, he’s come to Hokkaido, the northernmost island of Japan, to pan for gold and raise money for his best friend’s widow.

While in Hokkaido, he hears a legend about a stash of stolen Ainu gold and the only way to find it is to decipher a series of convicts’ tattoos. Soon after this, he meets a young Ainu girl named Asirpa, who confirms the legend: her father was one of the men murdered to steal the gold. Sugimoto proposes they team up, so that Asirpa can have her revenge and return the gold to her people and Sugimoto can take a small fraction to pay for his friend’s widow’s eye operation.

Along the way, they run across a serial prison escapee, deserters from a rogue army platoon, Russian revolutionaries and two of the last living samurai. Their goal is to kill and skin the tattooed convicts who are in hiding throughout Hokkaido, because the map leading to the gold can only be deciphered when all the skins are brought together. Everyone betrays everyone and a lot of woodland critters get eaten. 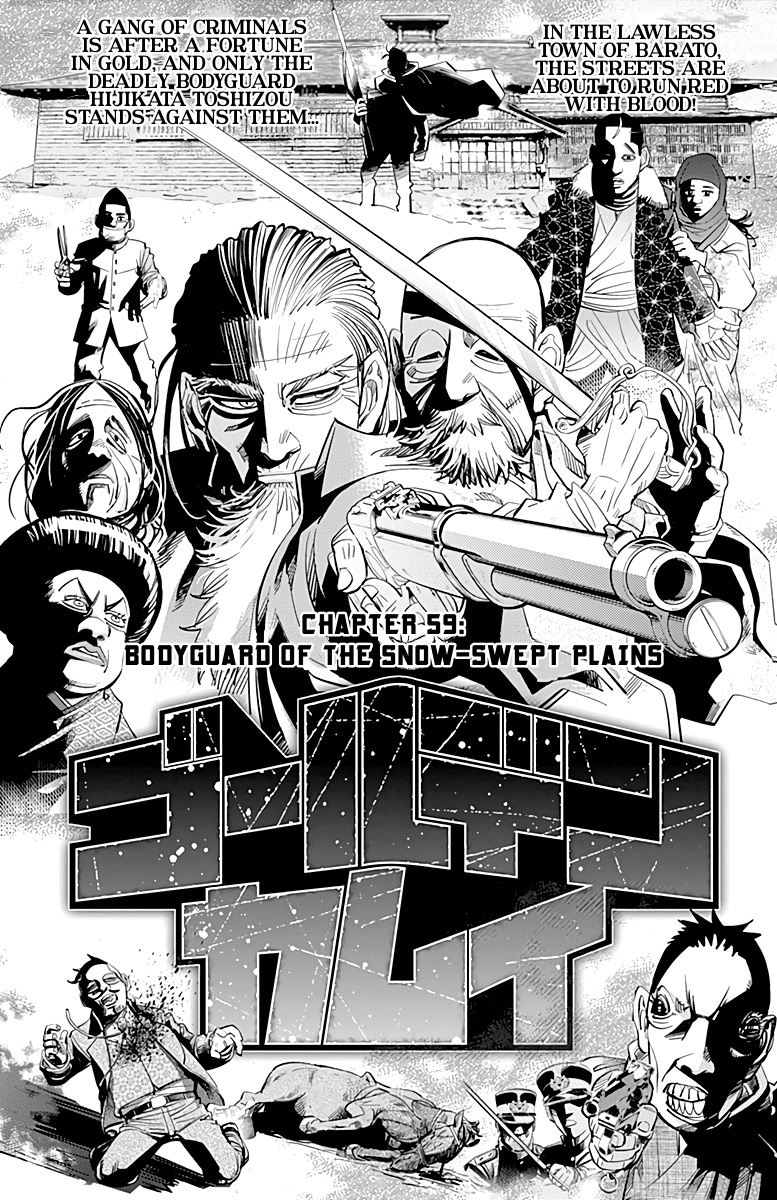 Wait, you said this was a Western?

North America doesn’t have a monopoly on frontier stories. Not only has the cinematic Western long since left Hollywood (think of spaghetti westerns or Takashi Miike’s Sukiyaki Western Django), there are a lot of elements to Golden Kamuy that immediately evoke a Western setting.

Hokkaido at the turn of the 20th century was not urbanized to anywhere near the extent of other regions of Japan and still contained vast stretches of wilderness, as well as the indigenous Ainu people, who have their own culture and ancestry. If you’re thinking to yourself that you’ve not heard much about them or other ethnic minority groups in Japan, that’s not an accident: Japanese popular media doesn’t discuss them very much and Golden Kamuy is kind of an anomaly in that regard.

Were this depiction stereotypical like how American Westerns (even today) depict indigenous people, you could be forgiven for writing it off. But artist/author Satoru Noda puts a lot of research into his work and collaborates with historians and language experts to be as authentic as possible. Golden Kamuy is actually so dense, even fan sites and unofficial fan-translations devote a great deal of space to historical notes.

There are other genre touchstones that will be familiar if you’ve ever seen a Western even once in your life. One story arc (one of my favorites, in fact) draws heavily from Akira Kurosawa’s Yojimbo, itself influenced by John Ford’s Westerns, with a showdown in a dusty town square. Telegrams, early telephones, bolt action rifles and wildlife hunting and tracking all feature prominently. Bank robberies? Got them too.

But what’s most Western about Golden Kamuy (which, after the other regional reinterpretations of the genre, is sometimes called yaminabe Western) is that it’s fundamentally about the slow erosion of native cultures under the pretense of “advancing civilization.” In 1905 when the story begins, the Ainu have already seen many of their hunting and cultural practices criminalized. Even as one revolutionary speaks of liberating Hokkaido and Sakhalin from imperial rule, other forces are interested in using the Ainu to create their own military nation-states. Asirpa and the other indigenous characters, far from being passive and tragic figures, are all about seizing the future with their own hands – even if the means are violent.

BOY IS IT EVER. Noda is quoted as saying that the thing he most wants readers to pay attention to in his manga is “the beautiful naked bodies of men” and also that drawing an extremely suggestive fight scene gave him an erection. 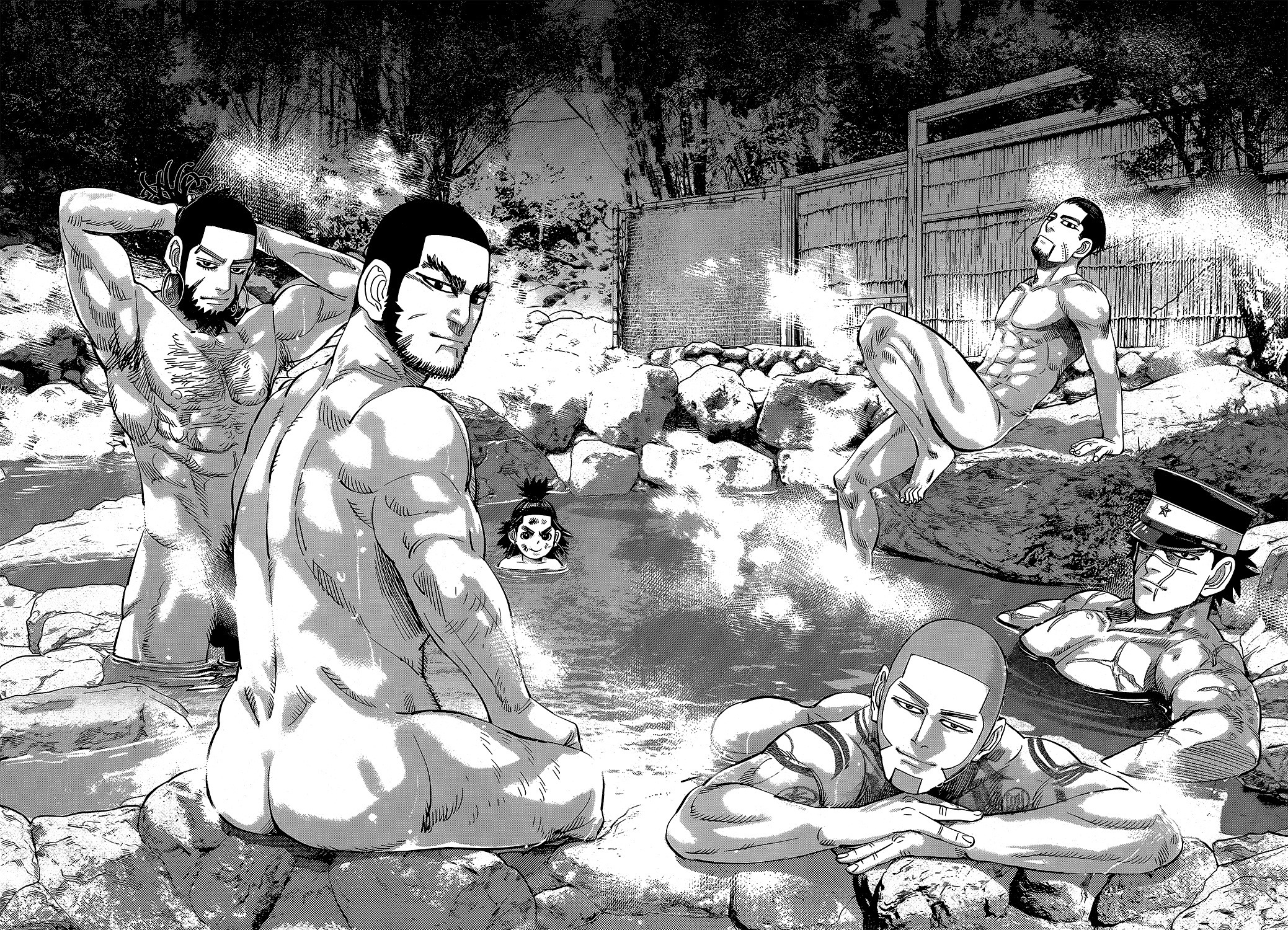 What about actual queer rep?

Several secondary characters are gay and, though it’s sometimes played for laughs, their love lives and emotional arcs are written with the exact same gravity and sincerity as their hetero counterparts.

There’s also a really cool trans woman. The anime subs and both official and unofficial manga translations all misgender her at first (which is really annoying, because as far as I can tell the original Japanese doesn’t gender her at all), but after her introduction there is no question about her gender and all the characters just accept her as she presents herself. She’s also a cannibal, which personally I find really awesome.

It’s got to be sexist, though. I mean, isn’t all manga kinda sexist?

Not… really? It’s true that most of the recurring characters are men, but the women who appear are all very different from each other. There is a bit of male gaze stuff going on, and some damseling, and that sucks for sure. But when gender gets explicitly brought up, it’s usually in the context of Asirpa flouting convention: we see her going on hunts with her father from a young age, equal or superior to the adult male characters in terms of intelligence and fighting skill, and never sexualized. She’s got a bit of a crush going on for Sugimoto, but it’s not really the main thing on her mind lately.

Ehhh what if I just don’t do manga though?

Even if you don’t tend to read manga, you’ll like this manga. Apart from being an exciting blend of genres, it’s a wonderful exploration of a period of history not many Westerners will be too acquainted with. It’s also really funny, full of beautiful naked people of various genders and has a guy getting his face taken clean off by a bear. 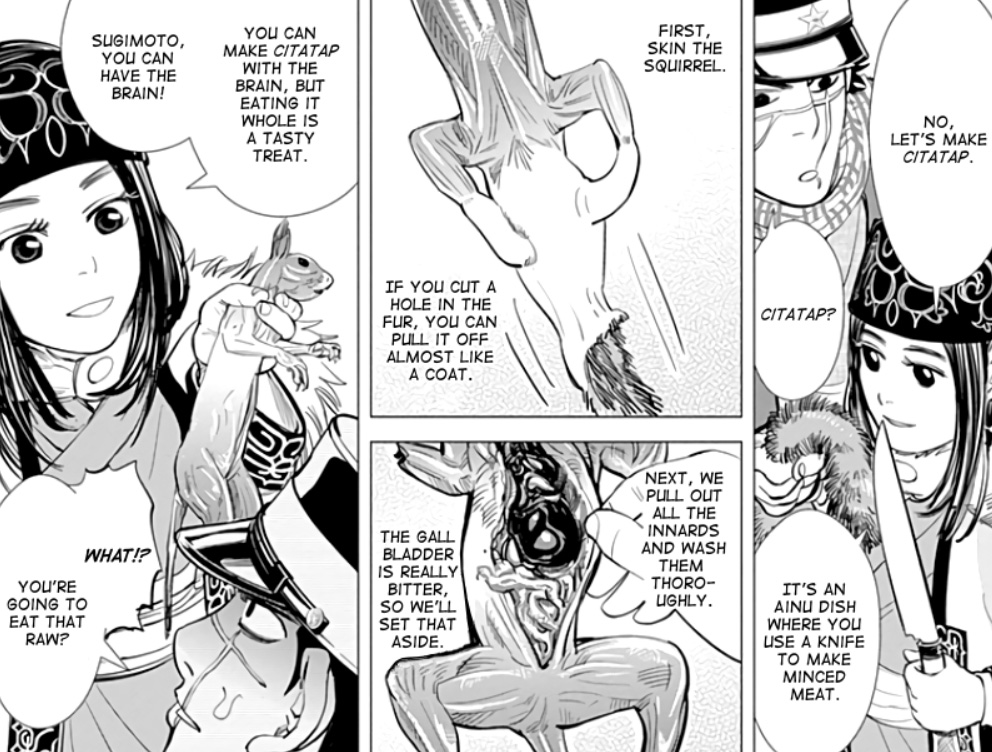 Um! Well, for what it’s worth, it does get significantly less gory after the first few volumes? I have a friend – a professor of Chinese history, who’s even planning to teach the manga in one of her classes soon – who was absolutely turned off by the violence but stuck it out because the story was so compelling.

Can’t I watch the anime instead?

I mean… you can. That’s how I first got exposed to the series, before switching to the manga. (The anime tones down the gore significantly as well, and personally, I am here for the blood, guts and face rippings. But YMMV.) The animation quality is a little uneven and it skips over some of the most exciting story arcs in the interests of time, but the voice cast and music are both excellent. I could listen to Ogata and Hijikata talk all day.

Oh, didn’t I mention? Toshizou Hijikata and Shinpachi Nagakura, two actual real life historical figures and members of the Shinsengumi (special police from the last days of the Shogunate), appear here as extremely badass old men. The real Hijikata died in 1869 defending the short-lived Republic of Ezo, but Nagakura really did live to old age in Hokkaido and a lot of what we know about the Shinsengumi today comes from his memoirs.

So, if you like Hakuoki or Fate/Grand Order, or even comedy shows like Gintama, good news! They are all part of the Greater Golden Kamuy Cinematic Universe. 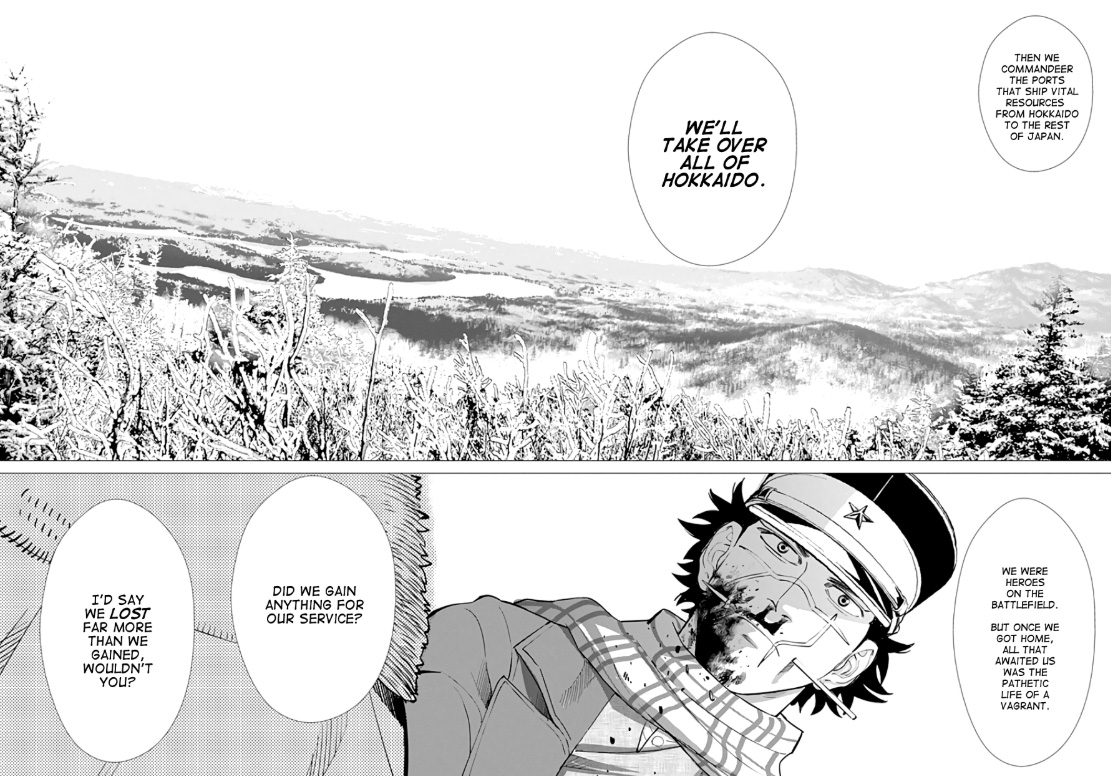 Is there literally anyone Golden Kamuy is not for?

If you’re sight-impaired, there are unfortunately very few text-only resources. While there’s an ongoing English dub in the works, I can’t really speak to its quality, but you might want to check it out if subtitles are a no-go for you.

It’s also probably a hard pass for anyone who absolutely cannot stomach any blood or violence. But if you’re reading Unwinnable, I’m going to guess you’re not in that demo.

Where can I read/watch it?

The anime is currently streaming on Crunchyroll and VIZ Media publishes the manga in both paperback and ebook form. The English editions only go up to volume 6 at the moment (with volume 7 apparently scheduled for December 18th), but if you can’t wait, the fan translations by Everyday Heroes are extremely good and include whole historical notes sections at the end of every chapter.

Obviously, if you’re reading the fan stuff, try to support the official releases as well, either by buying the VIZ editions when they come out or buying the digital releases of the Weekly Young Jump chapters. You’re an adult, you can pay for your anime.

If I’m not an adult, do I still have to pay for my anime?

You probably shouldn’t be reading Golden Kamuy either actually why are you here.