Six Days of Snow is a sad story about a pathetic man and the terrible life choices he makes.

This visual novel is a piece by Ebi-hime, which as a rule means you can expect two things: beautiful art and a depressing narrative. Six Days was no exception to either. The story follows Eiji, a middle-aged writer who’s in a bit of a slump when the story begins. He’s failed to make a positive impression on the critics who’ve read his single novel and recent poems, and his personal life has grown stagnant as he falls out of love with his wife. As a result, he’s decided to take a week’s vacation on his own to stay at the Azami Inn deep within the mountains in rural Japan. There he meets the other main character Reiko, the young daughter of the inn’s proprietress.

If you’re thinking that this is going to be another one of those stories where a creepy middle-aged man falls for a pretty young girl who doesn’t know better, then congratulations, you’ve figured out the plot of Six Days of Snow. Eiji is by all accounts an incredibly sorry excuse for an adult man, and he’s hyper aware of this. He knows that writing is a constant struggle for him, despite the fact that he’s been in the field for over 20 years. One of the first scenes that we see of him involves Eiji trying to explain city life to a rural taxi cab driver and failing to find the right words. His work has been critiqued as unrealistic and maudlin, whereas the poems that critics appreciated earlier in his career are scorned by him for being excessively wordy and overly emotional. Eiji constantly worries that his earlier work represents the peak of what he was capable of producing, and yet acknowledges that he is no longer the writer who could churn out the style utilized in the writings of his youth.

At the same time Eiji is struggling with his home life, specifically when dealing with his wife Sachiko. Eiji tells the reader over and over how absolutely perfect Sachiko is as a wife; she never violently argued with him, always supported his endeavors as a writer and has spent multiple decades being the perfect mother and homemaker to their two sons. She’s always smiling and knows exactly how to make miso soup and tea the way he likes it; it’s perfection and joy every day. Yet Eiji has finally grown tired (and frankly, a bit resentful) of his wife. Sachiko, by his account, has no ambition to do anything except exchange gossip with the ladies at her Wednesday painting classes before coming home to make dinner. She’s happy with her life continuing on exactly the way it’s always been and that grates on Eiji. Eiji and Sachiko never challenge each other or encourage the other to grow in any capacity; as a result, their relationship has become mundane and predictable to the point where it’s nearly suffocating him. Eiji hopes that some time apart from each other on this trip will cause him to appreciate his wife more, but even he doesn’t sound that convinced himself by this line of reasoning. 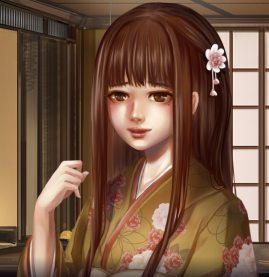 Reiko, on the other hand, is a young woman with an entire life of possibility stretching out in front of her. Unfortunately she’s trapped in the mountaintop inn with her overbearing mother who monitors and berates her every move. She’s never gone to any kind of formal schooling, never hung out with kids her own age, never even been on a train to travel somewhere outside of her tiny rural town. She’s trapped here by hypothetical guilt over leaving her widowed mother to run the failing inn all by herself and is convinced that there’s no real path to happiness available to her because of her isolation. Reiko seems destined to become yet another ghost trapped in the Amazi Inn.

All of this is supposed to come together to coalesce into a tragic romance about two wounded souls who can’t be together but find some beauty in each other before the affair tragically falls apart. Ebi-hime specifically includes a note that unlocks after you finish reading the VN explaining this, telling how she was inspired by a Japanese writer who himself wrote a story about a middle-aged man and a fifteen-year-old girl finding romance together at an inn when a true relationship would have been impossible for them. Six Days of Snow, however, was supposed to emphasize that the two main characters could not possibly love each other due to differences in age and life experience, and that Reiko was actually a more important character than Eiji; in short, Six Days of Snow was supposed to be her story, not Eiji’s, about growing up and finding herself.

I read that note and immediately thought of the movie Assassination Nation. There’s a scene in the movie where one of the main characters makes a comment about how awful it is to dress women for the male gaze, while at the same time the film garbs all of its female characters in stiletto heels and (what I assume were) whatever scraps of fabric the costume department managed to salvage after a fire destroyed a nearby handkerchief factory. What I’m trying to say here is that just because you’ve acknowledged that a trope is terrible and that you’re trying to invert it into something positive or worthwhile does not mean you get a pass to use that trope, especially since you’re more likely than not to fail in your goal.

I don’t buy for a second that Reiko should be considered the main character of this story, because everything about her is defined by how she interacts with everyone else. She’s either the cowering daughter, giggling hostess or (in the epilogue) a doting mother. There was never a point in the story where I got a good grasp of her character beyond young, pretty and likely to go along with what other people tell her to do. Some might argue that that’s because most of Six Days is told from Eiji’s point of view, and so of course we’re going to see an emphasis on the character traits that he’s lusting after. To which I would say fine, I will give you that if you can also agree that this cannot be Reiko’s story then and that, frankly, she doesn’t matter nearly as much to the story as Eiji. She’s not a person, she’s a pretty little doll who occasionally feels sad, only for the epilogue to inexplicably give her a happy ending with a husband and children in the city without bothering to explain how any of that came to pass. Building up a tragic life for one of your main characters and then pulling a fast-forward to six years later move where everything is sunshine and rainbows just feels lazy.

The entire forbidden romance angle is gross. Eiji isn’t a good enough person to simply not be attracted to a woman whom he states is younger than his children. Rather, the majority of the story focuses on his obsession with a child, and how he tells himself over and over again that he can’t love her because it isn’t right since she’s too young and they’ve only known one another for a few days. The pederastic implication being, of course, that if she were a little older and they knew each other a little better he wouldn’t feel so guilty. It barely skirts the line of him rejecting her because he knows how society would feel about their relationship, rather than him admitting how incredibly disgusting it is for him to be sexually attracted to this girl. 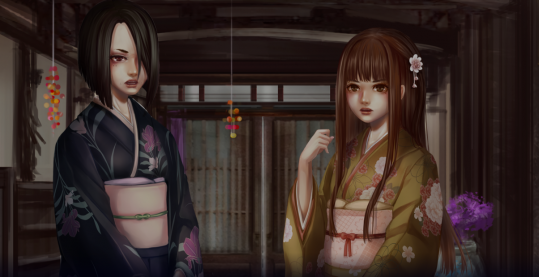 The fade to black sex scene is the prime example of how badly Six Days failed in its quest to put a new spin on the forbidden romance story. Ebi-hime explains that the scene was designed to be upsetting; instead of finding happiness or meaning in the act, both Reiko and Eiji feel worse afterwards because they know it was done without love and ultimately has no lasting or positive impact on their lives. Eiji will go back to the city, Reiko will stay in the country, and nevermore shall their paths cross. Which would have been fine and a pretty important message to send to the reader, if it weren’t for the fact that, again, Reiko is a child. Eiji is the one telling this story and he tries to frame it as him giving in to Reiko’s whims (because of course we have a damn Lolita issue where the young girl is the one tempting the older man into pursuing her) so that she can have this moment of making her own choice in the midst of a lonely and controlled existence. He is the adult; he is the one who is supposed to say no, particularly given how emotionally immature Reiko is due to her upbringing. This is taking advantage of a young woman who doesn’t know better, no matter how you slice it.

And then when everything is said and done, Eiji gets to go right back to his wife and kids in Tokyo with no guilt, because he feels like Reiko understood very clearly that there’s no chance of a relationship here. He will never face the consequences for doing this terrible thing. It’s nice to see in the epilogue that Reiko has moved on and doesn’t really think of Eiji beyond the books of poetry of his she’s picked up over the years, but the VN still missed a good opportunity to at least have her acknowledge how absolutely fucked up her pseudo-romance with Eiji was. Her decision to leave behind his final book in a shop after buying it comes off more as a woman finally getting over that first boyfriend she had in college, rather than a man twice her age whom she’d only known for a few days immediately fucking her as soon as the opportunity presented himself before disappearing.

I can’t bring myself to feel bad for Eiji. He had a sad life, but that’s entirely because he’s a pathetic character at his core. He feels that his writing is subpar but doesn’t ever mention any attempt on his part to pursue another career, past or present, or making an effort to improve his own work. He isn’t happy with his home life and somehow decides that running away for a bit might be the trick to help fix things (it doesn’t). He becomes obsessed with a young girl and is more saddened by the impossibility of a relationship between them than he is by the fact that he took advantage of a naive child.  This is, in the worst possible way, a story about cliche privileged man pain, and to quote a wise woman who used to edit for me, “Man pain is boring.” Six Days of Snow is on Steam for free. It’s pretty and has good music and sound design, but I can’t bring myself to recommend it.

Of Giallo and Gore: A Review