This feature is an excerpt from the cover story of Unwinnable Monthly #108. If you like what you see, grab the magazine for less than ten dollars, or subscribe and get all future magazines for half price.

I have just completed an arduous journey.

“Binging,” originally a term for eating or drinking to excess, has, in this modern era of streaming video,  become associated with watching an entire season of a television show in a short period of time, usually close to its release date. I find that binging TV is great for immediate gratification, but rather poor when it comes to discerning a show’s nuance or, honestly, retaining any fine detail of the experience after it is over.

You can also binge on books and the result, for me, is largely the same. There are many books sitting on my shelves that I have read in a single sitting. I can’t tell you a single thing about most of them. This, coupled with my experiences with binged TV, leads me to be extremely skeptical of the value of indulging in such gluttony. And yet… 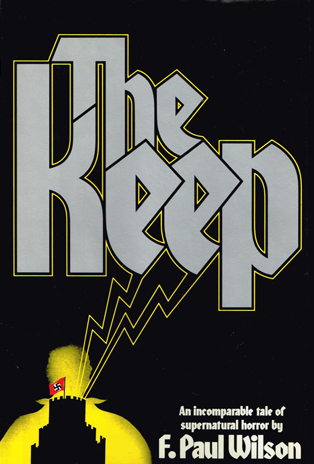 In early August, on a lark, I re-read F. Paul Wilson’s horror novel The Keep, one of my favorites from the era of 1980s horror paperbacks. It is…a complicated read.

In 1941, a group of German soldiers and Nazis accidentally unleashes an ancient evil imprisoned in the walls of a remote stronghold in the mountains of Romanian – the titular keep. A series of obviously supernatural murders follows, so the Nazis force a Jewish folklorist (and his daughter) to get to the bottom of the situation. The folklorist suffers from a debilitating illness and, plot twist, the vampire, Molasar, offers him a cure in exchange for his help in destroying the Nazis (and fully freeing himself from the prison to transform the world into a living hell, but he conveniently leaves that part out).

See, the vampire isn’t a vampire. His real name is Rasalom and he’s actually an ancient, immortal, anagram-obsessed sorcerer working in the service of a cosmic force – The Otherness – that is inimical to human life. Glaeken, the equally ancient immortal warrior who imprisoned Rasalom in the first place, soon shows up, falls in love with the folklorist’s daughter and winds up in the tricky situation of having to help the Germans in order to vanquish his old foe. Lots of people die, but the world is saved.

When Wilson originally published the novel in 1981, it was a stand-alone book. In 1984, he wrote The Tomb, a book seemingly unconnected to the events of The Keep. It a sort of urban horror/Libertarian power fantasy mash-up that pits Repairman Jack, a fixer in the mode of The Equalizer who enjoys guns and lives completely off the government’s radar, against a bunch of man-eating shark-men who have come to New York City for reasons I am not going to get into.

It is a rip-roaring book that verges on the ridiculous but manages to stay grounded thanks to its strong characters and penchant for abrupt violence.

I re-read it immediately after The Keep. At this point, about four days had passed. 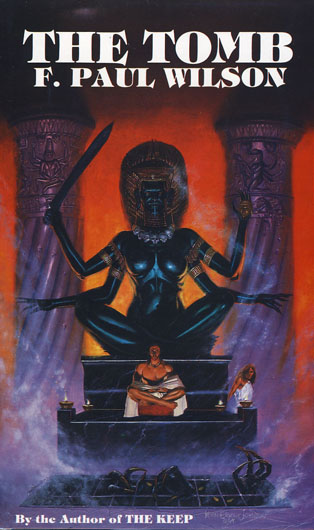 I had Wilson’s next novel, The Touch, on my shelf from the first time I read The Keep and The Tomb, but never got around to it back then. I remedied that next. Again, it is unconnected to the events of the previous books, dealing with a Long Island doctor who suddenly gets the supernatural ability to heal by laying on hands. The power to magically heal strains, and eventually destroys, the doctor’s life, which is deliciously Twilight Zone.

By now, I’ve dedicated about a week of my time to these books.

I don’t know if Wilson intended those three novels to be stars in a larger constellation when he wrote them, but at some point, it became clear to him that he could incorporate them into the series that would become known as The Adversary Cycle. The next two books – Reborn (1990) and Reprisal (1991) – mark a clear move to make this so. The first details the events around Rasalom’s reincarnation in 1968. The second, set after he reaches maturity in his new body, concerns his plot for revenge on someone who nearly prevented his rebirth.

It took me a little while to get through Reborn because it all seemed a bit preposterous: it is a mash-up of cloning paranoia and Rosemary’s Baby. On the other hand, the horror at the center of Reprisal is so messed up I had to read it in a single sitting, just to be free of it. I don’t think I would have been able to sleep otherwise.

The versions of these books that I read were all revised in the early 2000s, partly to modernize them, partly to make them more cohesive and, primarily, to make room in them for 14 additional Repairman Jack novels that lead up to the events of the final novel in the Adversary Cycle, Nightworld.

So we have two series of novels. Intertwined. OK. Amazon and AbeBooks, don’t fail me now… 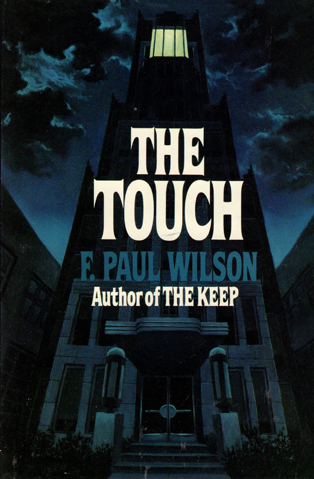 The easy thing would have been to just read Nightworld and be done with it. Something about Repairman Jack begged further investigation, though. The Tomb was a modest hit back in ‘84, but Wilson resisted the temptation of a character series at the time, waiting until 1998 to return to Jack. That’s six years after Nightworld resolved the main story (Jack is in that, but in the 1992 version, only as a bit player). There is evidence on the internet that Jack has some diehard fans out there and I guess the fact that they inspired Wilson to write fourteen more novels, pretty much detailing Jack’s month to month life between the events of The Tomb and Nightworld, was too intriguing for me to ignore.

They make for a strange series. Most of them follow a formula, with Jack working on two fixes: one big, one little. He drops in on his supporting cast in predictable intervals. Wilson re-uses stock descriptions of those characters – if I ever have to read about how Jack’s girlfriend Gia’s random article of blue clothing accentuates her blue eyes again, I might weep.

Yet Jack remains a compelling character. Over the course of the series, nearly all of his friends and loved ones, and a good deal of his clients, are torn violently away from him. Early on, it becomes clear that he has been chosen by The Ally, the power opposed to Rasalom and the Otherness, as the Heir to its champion. All of the hardship he suffers is a crucible preparing him for that role should Glaeken fall. I am not sure I have read anything that so powerfully portrays the experience of having secret knowledge about the world that is nearly impossible to act on. Worse, Jack is fully aware that he is a merely a pawn in a game far, far larger than himself. He spends much of the novels in an existential rage at his helplessness.

Wilson delivered a new Repairman Jack novel every year from 1998 to 2011.

There is something psychologically daunting about having a pile of over a dozen books on your shelf, knowing that you are determined to read them in order, that a huge block of your time for the next however many weeks will be occupied with their pages. At the start, it seemed like I would never be finished.

I’ve never been so aware of the act of reading, of how long it takes my eye to scan a line, a paragraph, a page. I obsessively checked both how many pages the book ran in total and how many were left before the next section break. I developed an instinctive feel for how long it would take to finish a chapter and the best moments of my day to sneak one in.

The first half was always the toughest, an uphill, hardscrabble climb accomplished in short bursts, over breakfast, waiting for phone calls, on line at the store; any normally empty moment could now be filled with a bit of Jack. The back half was almost always devoured whole, lying on the bean bag chair on the floor of my office, finished at an hour way later than any responsible parent who has to take care of a kid at 9 AM should be awake.

I finished the last, the appropriately named The Dark at the End, on October 5. I now drink at least two cups of coffee a day regularly. 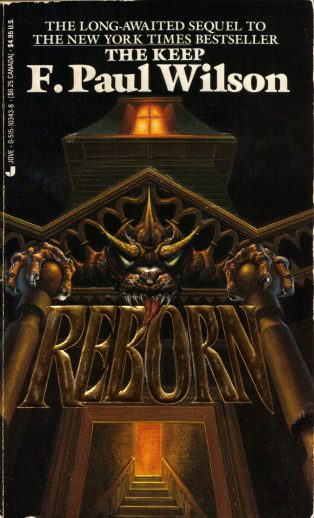 Wilson heavily revised and expanded Nightworld in 2012 to account for Jack’s bigger role. After 19 books, this is it: the end of the world as we know it.

I don’t honestly know if the book is flawed, or if my perception of it is warped by having read all the books in a little over two months, but I am not sure why Wilson went to all the trouble. Nightworld is a perfectly adequate apocalypse novel. I find the horror of the monster invasion to be weirdly uninspired and flat, but the fact that our heroes spend most of the book pretty sure they’re screwed is interesting and more than a bit depressing.

But Jack is still the second fiddle. This book has an ensemble cast drawn from the previous Adversary novels so he has to share the spotlight. Two villains who survive the Repairman Jack series get dealt with, we learn the fates of some of Jack’s surviving clients and his supporting cast has a bit of peril to deal with, but Nightworld is the end of Glaeken’s story, not Jack’s. And you can feel it all the way through. I am not sure how I feel, knowing that I read fifteen books about the back-up guy who never gets his chance at bat.

It has only been a few days, but my recollection of the books is already fading. Eons ago, back in late August, I had lots of thoughts on the themes of the books, nitpicks about Wilson’s politics, praise for his complex female characters – but all that has turned fuzzy and indistinct. I listed that out because that’s all I can manage.

Writing this now, each Repairman Jack book seems to be structured around a particular ax Wilson wants to grind. He tackles conspiracy theories, sexual predators, pharmaceutical companies, the internet, the folly of religious faith, psychics, judges, Scientologists, illegal drugs, the over-development of Florida. Sometimes, the moral of the story is insightful, other times it treads into “old man yells at cloud” territory.

Jack, the most capable individual in New York City, is often at odds with groups – cults, supernatural hive minds, carnies and secret societies. There is probably something to wring out there about Libertarian power fantasies and anxieties of the individual vs. the crowd, but I can no longer find the through line, even if I wanted to. I am not sure enough people have read these books to justify me thinking deeply about them.

There are six more books about Jack – three young adult kid adventure books that are heavily referenced in the last few volumes I read and three novels about Jack’s days starting out as a fixer in Manhattan. In the Author’s Note of Nightworld, Wilson says that after those books, “You will know all I know about Jack and I will have nothing left to say. I need to move on.”