A few months ago, I unexpectedly received a box of Blu-ray screeners in the mail. I had been anticipating one or two titles, at the most, but I didn’t really know what to do with seven movies, stretching across at least five genres, most of which I had never so much as heard of. So, I did what any self-respecting film writer with no sense of proportion would do: I hit upon the idea of watching them all over one long weekend and writing up the whole affair the same way that I would a film festival. Hence the first (annual?) IAaFF was born.

Of course, “the best laid schemes o’ mice an’ men,” and all that, and that proposed “long weekend” turned into a couple of months as my spouse broke her ankle – this on top of a string of medical mishaps stretching back for most of a year – and one of my ongoing medical issues took an unexpected turn. While all that would have probably derailed a real film festival entirely, I had no ticket-holders to satisfy and no distributors to appease, so in this case it just meant that instead of spanning one long weekend, the first IAaFF stretched to a couple of weekends, a little over a month apart. Accordingly, this write-up will be broken into two halves, covering the two different weekends of IAaFF. Now, without further ado… 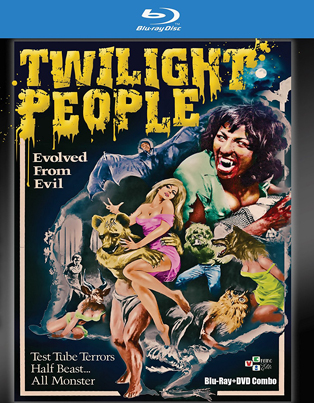 The fest started out simply, with an evening screening of Filipino filmmaker Eddie Romero’s unofficial 1972 Island of Dr. Moreau adaptation, The Twilight People. I had promised a friend online that I would watch Twilight People before any of the others, so I sat down with it on a Thursday night as a lead-in to the beginning of the festival proper.

Starring Kansas City’s own John Ashley (Attack of the Eye Creatures) and an early-career Pam Grier as the Panther Woman, Twilight People feels, from the jump, like it would be right at home on an episode of Mystery Science Theater 3000, to the extent that you can practically hear Mike or Joel and the bots riffing over the top of the jazzy score and soft-focus island shots that precede the main titles. Indeed, its plot should feel extremely familiar to MST3k veterans, treading, as it does, over ground that has been amply covered not only in other Island of Dr. Moreau adaptations but also in MST3k standards like The Unearthly.

This makes Twilight People easy to dismiss or underestimate, and one IMDb reviewer goes so far as to call it, “Undoubtedly the worst film of all time.” But there’s a lot to love under the caked-on animal makeup, cardboard-cutout sets, day-for-night shots and boilerplate story of Twilight People, for anyone willing to give it a chance. That same reviewer calls the dialogue “dreadful,” but the usual bravado and scientific mumbo-jumbo of a film like this is actually shot through with sardonic wit and a surprising amount of humanity. “I’m a little skeptical about building master races,” our hero quips shortly after the sinister scientist whisks him off to his island lair and explains his plans, “maybe it’s the unsavory precedents.”

While the eponymous Twilight People are the obvious midnight movie draw, the part of the movie I liked best was Jan Merlin as the doctor’s murderous, blond-haired right hand man, who basically begins flirting with the hero from the moment the doctor’s goons pull him out of the water. In fact, the doctor’s (predictably) lovely and suddenly sympathetic daughter calls Merlin’s character out for having a hard-on for John Ashley’s protagonist in a later scene that makes their Hannibal-like predatory “romance” less subtextual than you might expect. As the film’s best subplot, it also gets the film’s most satisfying wrap-up, in one of the many beats that are handled more potently than usual for this kind of film.

It helps that VCI Entertainment has given Twilight People a surprisingly robust Blu-ray release, including a mostly-sharp-looking but inconsistent 2k transfer that is so clear, at its best, that you can read the writing on one thug’s underwear. 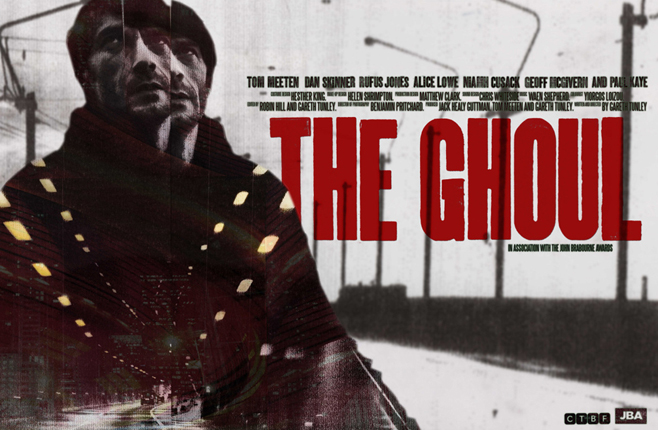 While the order of my first movie was determined by online agreement, I wanted to screen the rest of the films in a way that felt as much like a real film festival as possible. With no one to program the first IAaFF for me, and no way to do the programming myself without learning more about the movies than I wanted to know before I sat down with them, I fell back to randomization. I assigned each remaining movie a number, 1 through 6, and then rolled a die until I had put all the movies in order.

First up was The Ghoul. Not the Boris Karloff one or the Peter Cushing one, this was the 2016 British film written and directed by Gareth Tunley and executive produced by none other than Ben Wheatley. When I’m writing movie reviews just for my own blog, I tend to pull out quotes in order to represent the film, and that habit dies hard, even when I’m not doing it on purpose. The first quote I wrote down for this one was, “I told you it’s an ‘ead scratcher.”

Oftentimes, when we describe a movie as “mind-bending,” what we mean is that it takes a sudden turn, frequently in the last reel. But The Ghoul begins turning early on and never really stops, twisting in on itself like the Mobius strips upon which the film (and its eccentric and possibly sinister psychotherapist) is fixated. Is our protagonist a homicide detective dreaming himself a depressed person seeking help from a therapist, or vice versa? Rather than saving itself up for a twist ending, The Ghoul is content to let the boundaries of what is and isn’t all in the character’s head stay porous from the first frames, helped along by evocative photography and a score that’s more melancholy than haunting.

It all builds to a climax that is more inevitable than shocking, leading us, like that twisting Mobius strip, to the other quote I wrote down while watching the movie: “We’re all in hell, we just can’t remember how we got here.” 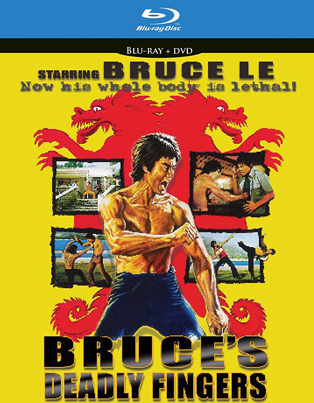 From there, day two of IAaFF took a hard stylistic left turn into Bruce’s Deadly Fingers, starring Bruce Le (not to be confused with Bruce Lee or Bruce Li), one of a whole subgenre of “Bruceploitation” movies that came out in the years following Bruce Lee’s death. (Bruce Lee himself gets a screen credit, in spite of only appearing in still photos, as near as I could tell.) I’m sure that someone reading this is really into this genre of films and can probably tell me exactly where this one fits into the canon, but as someone who has only seen a bare handful of actual Bruce Lee movies – let alone their Bruceploitation knock-offs – I can only comment on how it plays to a layperson.

Which is to say that, while Bruce’s Deadly Fingers, like its lead actor, may lack the charms of the genuine article, it has more than your recommended daily dose of random fights, 70s fashions and Foley artists working overtime. Plus, Bruce Le and his team of, well, whoever they are exactly, have charms of their own, even if what passes for witty banter from Bruce’s character is, “Shut up! I don’t like your face!”

(The dubbed dialogue is full of carefully chosen gems, including the bad guy’s romantic reassurance to his mistress, “I may kill others, but I won’t kill you.”)

Though the plot itself is fairly straightforward—everyone is after Bruce Lee’s mythical “Kung Fu Finger Book” – the film is so crammed with characters that it can be difficult to keep track of who’s doing what to whom at a given moment. Even the character’s themselves occasionally seem to get confused, with the good guys fighting one-another because they don’t know who’s who.

Lots of folks show up in places only to immediately have to leave, and if you cut out every instance of people incredulously saying the words “Kung Fu Finger Book” you’d probably slice the film’s running time in half, but if you’re into this kind of thing, there is fun to be had with Bruce’s Deadly Fingers (there’s a pull quote for you) and often it’s the film’s shortcomings that provide the enjoyment as much as its strengths. Just be prepared for possibly the most abrupt ending in cinematic history.

There’s also some sexual violence to watch out for, if that kind of thing is a deal-breaker for you, including a woman getting sexually tortured with the tiniest imaginable snake and a rape scene inside a literal ring of fire which quickly moves outside the ring because the fire gets out of hand. That could have been intended to be symbolic, but I’m pretty sure it was just an accident.

As I mentioned earlier, my original intention had been to do IAaFF as one long weekend, but it became something of a “lost weekend” instead when Grace broke her leg right after the second day of the fest. In the next installment of IAaFF, I’ll tackle the other half of the festival, featuring a Mario Bava movie, a western, a particularly unusual biopic and an equally unusual anthology film.