Gender seems like an abstraction—one that’s very much mired in controversy and misinterpretation, and it’s not hard to see why. Most of us were brought up to perceive it as a binary concept, which defines gender as being strictly male or female. Only recently was the suggestion of seeing gender as a broad spectrum of identities, instead of a binary scale, brought into the mainstream. It’s a subject that needs to be deliberated upon (here’s one of my favorite videos on the topic) but in the simplest of terms, your gender should probably be what you feel most comfortable with.

My realization about my own gender wasn’t a eureka moment. I eventually discovered that the distinction between being male and female didn’t matter to me, and that I loosely identify as genderqueer—that is, I don’t relate to both masculine or feminine identities. It’s not that I have had any issues with gender dysphoria; in fact, it’s more like an absence of gender, rather than an overwhelming excess of it. Think of it like it’s a black, cavernous void of emptiness. 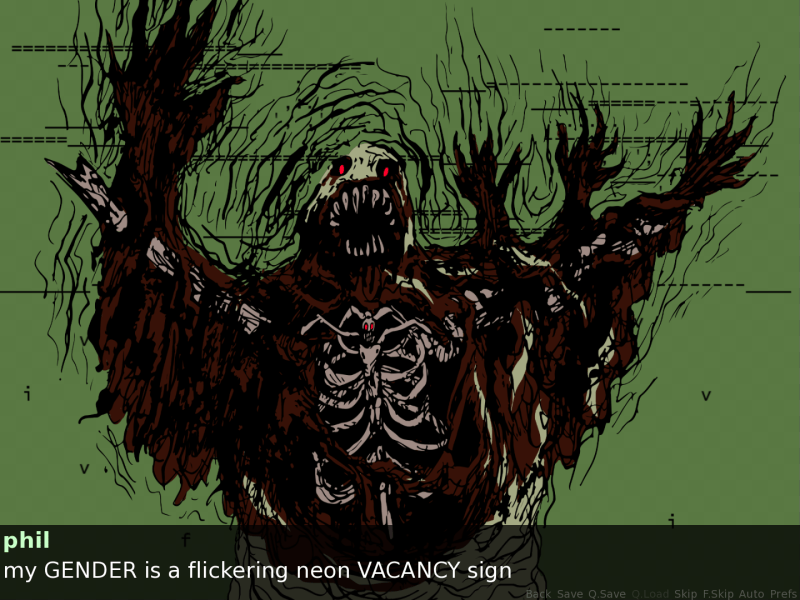 I probably should tread carefully. Without much context, this character may seem like a caricature of transphobic punchlines that have gained too much traction as internet lingo, but this is more than what it seems. Phil, this ghastly but oddly endearing monster, is from a visual novel called Genderwrecked. In this post-apocalyptic universe about meeting grotesque monsters, adorable meat boys and a sexy dad bot, you’re also somehow compelled to learn more about the meaning of gender. It’s the game’s earnestness that lends an emotional gravitas to this sensitive subject.

You start with introducing yourself to Phil, the first of many fantastical creatures you meet in Genderwrecked. But instead of just giving your name, you also get to share the pronoun you prefer to go by. In real life, the practice of sharing your pronoun, be it on social media or at even work, can nurture an inclusive culture that welcomes alternative gender categories, from non-binary to two-spirit. Rather than being derisive about such differences, Genderwrecked sets the stage by being warmly and actively mindful of them. And even with their sloppy appearance and the gaping cavity in their chest, Phil left me more astounded by their humanity than many other fictional characters.

This sincerity may appear to insulate the game from transphobic jokes, but Genderwrecked also treats the subject matter with plenty of candor and humor. Even those who may initially be unenthused by the intricacies of gender can be captivated by the game’s charming Lovecraftian inhabitants. On the surface, discussions on gender may seem laborious or even redundant, especially to those who never had to grapple with their gender identity. And while useful within the LGBT and feminist circles, terms like “cisgender” and “heteronormativity” are more likely to baffle rather than educate. Instead, Genderwrecked broke down murky gender concepts through metaphors and allusions, which can be occasionally enigmatic but are almost always relatable. Take Larry, a sentient energy of flames, who confided in you about its loneliness. Even as it embraced its gender—which it saw as a force that burned as brightly as the scorching sun—it felt that its identity also repelled other monsters. It’s a sentiment that many trans people have probably lived through before.

To see such care taken into depicting multifaceted stories about gender is rare in videogames, and is perhaps due to Genderwrecked being a reflection of its trans creators’ own observations and experiences. I doubt the visual novel will change stubborn minds, but those open-minded enough to consider that what we know about gender and sexuality may be flawed, will find the game to be both illuminating and captivating.