In a legacy board game, you write on the board, remove pieces from play and, generally, keep all of your progress from session to session. Popular examples are Pandemic and Risk. It’s easy to see the appeal of the mechanics while tied to those two games – persistent control over borders or disease research and an ever-evolving game world make for play that can be novel in the physical realm of board gaming.

While Risk and Pandemic are the most popular, a couple are more intriguing, namely Kingdom Death and Gloomhaven. I can’t really discuss the former, as I haven’t played it (I do want it, though), but I can gladly speak at length on the latter.

Designed by Isaac Childress, Gloomhaven is an attempt to make a tabletop RPG that doesn’t require a DM. Its success in this is up to interpretation, but my time with it so far has been entertaining. So, how does Gloomhaven work?

When you first open the giant box, after punching out and unwrapping all the starting stuff, you choose between six starting characters. They range through the usual fantasy fare of wizards and rogues, tanks and healers, but they all have a bit of nice backstory and artwork. These will be your first characters.

The conceit of Gloomhaven is that you’re playing a grand campaign, as many characters, through the history of the town. When you first start a new character, you draw a quest card. Once that card is completed, you retire your character and start a new one, often unlocking a new characters along the way. You’ll also get new dungeons, town and travel events, lore and, well, too much to realistically list here. The entire game evolves and changes as you play.

How do you play? Gloomhaven is the type of game that has a lot of rules, but they aren’t overly complex. At its base, this is a card game with modular combat like Descent. You fit tiles together and set up monsters on hexes. These are your encounters and your dungeons. They drive the story. The game comes with a giant scenario book full of flavor text and instructions that will guide you through the set up and narration required.

Each character has a deck of cards and, based on their overall hand limit, they can only have so many in a game. As an example, the Tinkerer has 12 cards. All of these cards are in his hand at the beginning. You play two cards a turn, with numbering on the cards determining your initiative score. Once played, the cards are either discarded or, in the case of many of the more powerful abilities, removed from the game until the next scenario. If you run out of cards, you are exhausted and remove your piece from the board. If your team wins, you still win. If your entire team is exhausted, you lose.

You can only get your cards back by resting, which requires that you remove a card of your choice from the game until the next scenario. The other way you lose cards is by taking more damage than you have life. If that happens, you can discard a card at random or two of your choice to negate the effect. This is a difficult, but enjoyable, mechanic that adds a bit of planning and strategy. 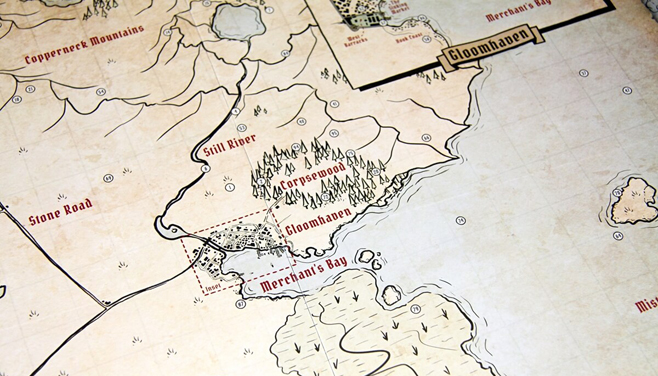 Cards are the only way, other than defeating a scenario, that you gain experience. You don’t gain experience for defeating monsters, you get experience from playing powerful cards. Some cards have experience point values listed on them and when successfully used you gain the experience. Many of the cards that net you any value, though, are discarded. It’s a constant balancing act between leveling at a reasonable pace and exhaustion.

If you defeat the scenario, you unlock new locations on your overworld map and gain rewards. On the way to a dungeon, you perform Road Events. These are a sort of “choose your own adventure” storyline that can have good and bad effects. When you return to town, you can perform a Town Event, which is the same thing as a Road Event, but with usually kinder outcomes.

As you explore the world and do more scenarios, the map changes and the town grows. You have access to higher level equipment and more interesting adventures as your town goes from tiny stop to thriving village. It’s a hell of a trip along the way.

I received my Kickstarter copy of Gloomhaven about a month ago and since have played over a dozen times, thoroughly enjoying each session. It has good co-op and single player rules. Though I’m playing with a friend, I can see this as a fantastic single player experience, if a bit on the difficult side.

The game will be available at retail soon, but it does bear a hefty price – just shy of 300 dollars. The Kickstarter was much more reasonable. On the flipside of that, it is, hands down, the biggest board game box I own. There is so much content that it’s almost daunting.

Gloomhaven is an interesting experience that might be too much for some players, but if you fit the bill, it’s quite the ride. Building up a fantasy town and discovering its dark secrets is reminiscent of my days as a kid, playing D&D with my friends and feeling the rush of adventure.

I can’t wait to get back to Gloomhaven.

The Mundane Magnificence of Persona 5