Vampire stories never tire of trotting out the tired moral that eternal life is a curse more than blessing because it estranges those afflicted with it from the natural order of things and condemns them to watch as those they love die, leaving them alone. But the conclusion they arrive at is disingenuous. By their own logic it is not the length of life or the unnaturalness of the vampiric condition that is the sin but life itself, for on some level life has to be understood as a series of perpetual loss. Nobody but the hermit lives truly apart, and the hermit is spared only because they’ve seen fit to inflict total loss on themselves prematurely. The rest of us daily deal with the possibility that this may be the last time we pet a beloved dog, talk to our closest friend, hold our child, kiss a lover, realize on some level that every goodbye we bid our parents or our siblings might very well be the last.

And so it is that the most meaningful development in five volumes of Happiness is not Yuuki’s meeting with Sakurane, who reveals himself here as a vampire worshiping nihilist eager to enlist Yuuki in his quest to push beyond conventional boundaries. Nor is it Okazaki and Nora’s capture by the still-unidentified organization and the testing they’re subjected to that raises the most hackles (though, as always, Oshimi is never better as an artist when he is 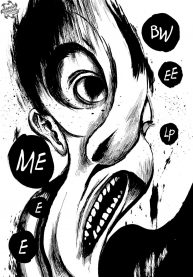 giving shape to the feelings of. The montage that caps off the penultimate chapter of this volume is perhaps the most disturbing art he’s yet rendered, page after page of tangles of distorted limbs and grotesquely elongated  faces  contorted in pain that suggests better than any literal representation the terror and the pain of Okazaki and Nora’s captive condition). No, what seems most significant of all is Oshimi’s decision to skip ahead ten-years into the future with this volume’s last chapter and to shift the story’s focus entirely onto Ghoto, now an office-worker who bears scars both mental and physical since surviving Sakurane’s botched attempt on her life just chapters earlier.

No attempt is made to update us on Okazaki and Nora’s condition, no hint given as to what’s become of Sakarane and Yuuki. Not even thesnippet of an overhead radio broadcast or television program that mentions unsettling incidents so commonly used as unobtrusive exposition in such stories flits in to Gosho’s dull daily drudge to remind us of what she and we both have left behind.But this absence possess a presence that any appearance by the vampiric members of the cast would 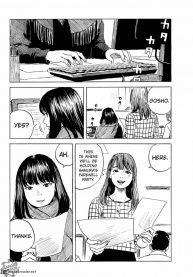 not: Oshimi’s decision to hide them makes it seem as though what has befallen them in the interim is so heavy that to reveal it now would be to squander its impact before its had time to ripen. Better, it allows a chance for the reader watching Gosho work through her mundane daily life to slowly realize that while she’s changed drastically, Okazaki and the others will not have aged a moment. No matter what traumas were inflicted on them, no matter what depravity they’ve sunk to, their physical appearance remains frozen ten years in the past. The world has moved on without them.

It has not left Gosho behind, though. Nor us. And so we find that even while absent, Okazaki and his ilk can only remind us of the horror of our own condition, the loneliness and fragility inherent in existing within time. If Sakarane’s demented appeal to Yuuki as “his greatest…his only hope” sounds so pathetic, it only does so because there is a note of desperation in it so immediately identifiable and repulsive it must belong to a part of ourselves we daily try to avoid. Yes, there’s a sophomoric nihilism about his reminder that “Everything in this world is an illusion. Living, dying…there’s no meaning to any of it,” but again an undeniable truth that rings clear, louder still again when we see the scar on Gosho’s neck at volumes close. 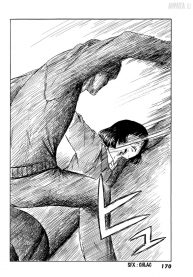 Yet undergirding even this desperate hope is the knowledge that vampirism is no defense against the more abstract ravages of time. Death, after all, is not the only thing that ends our worlds or our loves. Devoted friends drift apart without incident as their lives change, familiarity and inertia ruin a once thriving marriage and distance turns faces we might once have drawn from memory to inky smudges, but in all cases none of this degradation could happen without time. Evens that seemed so massive – the brutal murder of Nao’s family, for instance – become nothing but a memory. Time and time alone allows the conditions for these tragedies; time is at the root of all endings. Everything we once considered meaningful will fade in due course, no matter what unholy bargains we strike: immortality is no insurance against loss or ruin. Maturity – the ability to process this loss with dignity and understanding – seems to be the best thing Oshimi thinks we might hope for, and even that is elusive.

Why should it be any other way? Happiness has worked until now because even in the trapping of the urban vampire-thriller it finds new ways to show the horrors of the mundane reality of growing older. It can hardly do to shy away now that it’s addressing the root of all such problems.