This story is a reprint from Unwinnable Monthly #93. If you like what you see, grab the magazine for less than ten dollars, or subscribe and get all future magazines for half price.

John Carpenter’s remake of The Thing was a dud at the box office in 1982, but in the years since, its influence has grown to the point that you can’t help but see it everywhere. Just this year, the soundtrack was re-released on vinyl, a board game based on the movie was announced. I can’t even tell you how many recent movies have taken obvious inspiration from The Thing – The Void, The Hateful Eight, Black Mountain Side, Almost Human and Blood Glacier all spring to mind. Any time you have a story where people are stuck somewhere, preferably in the snow but not necessarily, where they can’t be sure they trust the person sitting next to them, because they can’t be sure they are who they say they are, that’s it: you’ve spotted the influence of The Thing.

The paranoia is the secret sauce. When you’re in a desperate situation, can you really trust anyone? How well do you know them? It doesn’t matter what scares you most – communists, fundamentalists, flat earthers – the fear to trust is a powerful and isolating one.

What I’ve never thought it was is funny, but in that, the videogame Unfortunate Spacemen proves me wrong.

Unfortunate Spacemen is a multiplayer first person shooter where everyone is a workaday spaceperson except one person who is a shapeshifting monster with a voracious appetite. The result is extremely paranoid but, also very, very silly.

Geoff Keene, developer at Sandswept Games, took time out of working on Unfortunate Spacemen to chat about horror, comedy and the joys of eating your friends.

How did you start working on games? Who is on the team?

When I was 17 I started developing games with my father (Richard) and that’s pretty much all I’ve been doing ever since. We’re nearing on about 9 years of creating games and have seen a few people come and go over the years. Most of the time I work by myself, but currently I’m paired with an artist and a great QA crew from New Blood Interactive. As a whole, we’re currently working on Unfortunate Spacemen, and a Diablo-esque VR dungeon crawler called Darken Crawl.

How do you describe Unfortunate Spacemen?

Unfortunate Spacemen is basically The Thing, but in space and with your friends. Someone in the game is a shapeshifting monster who infiltrates and steals identities while the other players are hapless Spacemen trying to complete objectives and escape, while at the same time hunting and trying not to get eaten by the shapeshifting monster. 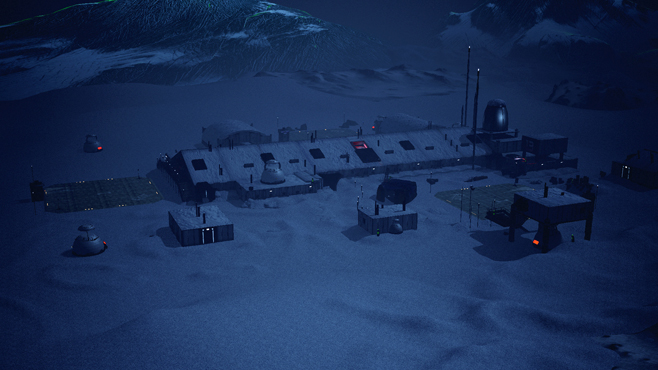 The Thing references jump right out at me immediately, so let’s start there. Are you a big horror fan? How did horror inform your approach to developing the game? Besides The Thing, what other horror media inspired you?

Oh yes. I especially love some good alien horror. I’ve sort of said “just about anything goes” when it comes to alien horrors and beasts from the blackest parts of space. The weirder, the better. If it drips, wriggles, writhes, or lays eggs, it’s probably inspired Unfortunate Spacemen.

For that matter, Unfortunate Spacemen seems equal parts scary and lighthearted. There’s a long tradition in mixing horror with comedy – can you speak to your thoughts on the combination and how you used it in the game?

Unfortunate Spacemen is really about humans facing unimaginable space horror with a thick layer of funny/corporate-nonsense on top. You can imagine in the distant space-future, tentacle-laden aliens are just something space station personnel simply have to deal with once in a while, so I wanted to capture that essence. “Yeah sure Jenkins, that alien will totally melt through your bones, but you know, we got you some gloves for that, so… Have it done by 3 PM.” 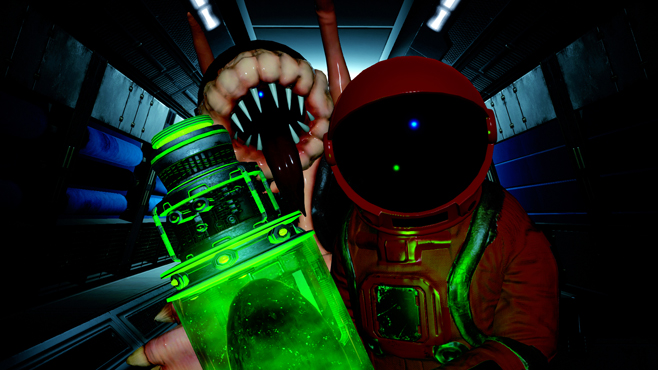 The influence of The Thing seems to being continuing to grow. Why do you think that’s so?

That’s because despite its initial niche popularity, the internet has helped it grow. It’s actually a fantastic film. It’s got awesome mystery, great suspense, and oh, I don’t know, maybe it shines a light on humanity’s natural (or unnatural) paranoia towards their fellow man. That’s something I capitalize on heavily in Unfortunate Spacemen. You would not believe some of the witch hunts I’ve successfully led as the Monster.

There was one game that made me want to make Spacemen. It was a top-down Starcraft 2 custom map. Besides that, I didn’t take anything from existing games. Everyone is always surprised to learn that I actually haven’t played any other games like this. Players from those games (or mods) come and tell me how excited they are about Unfortunate Spacemen and the fact that it’s got so much content and depth in comparison. I’d like to say I’m the first to do a fully in-depth first person shooter about a space-monster killing Colonel Mustard in the dining room with a candlestick, so . . . yeah, let’s go with that! 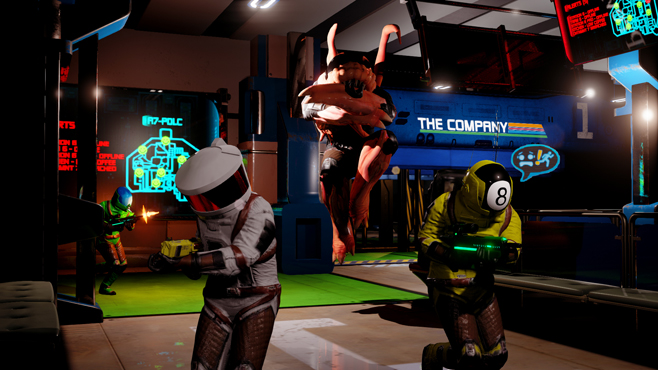 Paranoia is a key feature of the game. How did you approach designing to emphasize paranoia? Can you walk me through a bit about how proximity chat works?

Paranoia is not just key, it’s the keystone of the gameplay arch. At first I thought it might be impossible to design the game in a way to force people to grow paranoid, but it turns out . . . you totally can. Everyone in the game has a very strict identity – usually a random color, such as Red, Azure, Lasagna or Mustard.

The Monster, who gets their own identity as well, can, at any time, switch to look like one of the people in the game. This causes insane distrust between people, because you never really know if the spaceman you’re talking to is real, or simply blending in to steal, betray or otherwise do harm to you.

I’ve balanced the game in such a way that sticking together is always stronger against the Monster (especially when it transforms and attacks with its vicious claws). To counter that, the objectives, the power weapons, and other sabotage by the monster often require people to split up, meaning you lose sight (and sound) of your “friends” and . . . who knows if the next time you see your buddy . . . is he actually your buddy or just the monster wearing his skin?

Proximity chat ensures that you only hear people pretty close to you. This ensures the Monster can sew their seeds of distrust and chaos with many players being none the wiser.

Oh, and dead players can roam the map as ghosts and occasionally flicker the lights to try and tip off players, or otherwise drive the paranoia deeper still. 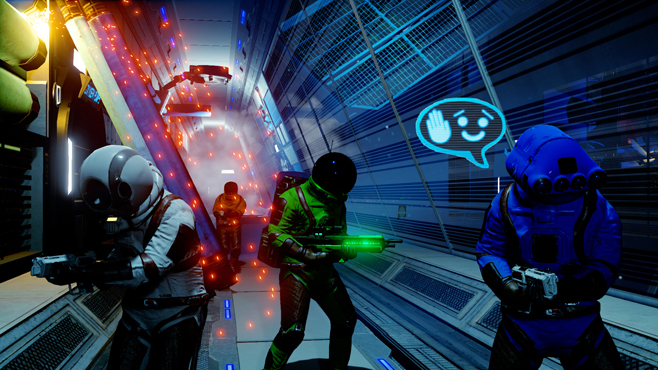 I feel strangely compelled to collect all the custom space helmets. How do you go about designing not just the helmets themselves, but the impulse to collect them?

YES, CHASE THAT FEELING. BUY ALL THE HELMETS.

Actually, they’ve been fun to create and design. Connor “MadDok” Moran has done most of the helmets and some of the newer artwork, and he does some fantastic work. We just come up with designs we find exciting, interesting or just plain different. There’s a few homages to various sci-fi works and some are simply functional and awesome. I think a lot of science fiction games have helmets that are just a mess of geometry and glowing lights. (Compare helmets in Halo Reach to helmets in Halo 4 and you’ll see what I mean). The art is good, but they have so little in the way of personality and, in Spacemen, personality is everything. We wanted each helmet to really have some character and bring a totally different look to your spaceman.

And of course, the Monster mimics any customization a player has when disguising as that player, so customization doesn’t have any detrimental effects on gameplay.

The development blog is fascinating and in-depth. What made you take the open development approach?

I can’t imagine doing things any other way. Why would you not talk as often as possible to the community that plays your game? Who else are you making the game for if not them?

It’s probably a good time to mention that I host Unfortunate Spacemen community games every weekend on our Discord, which I also hang out at all the time. 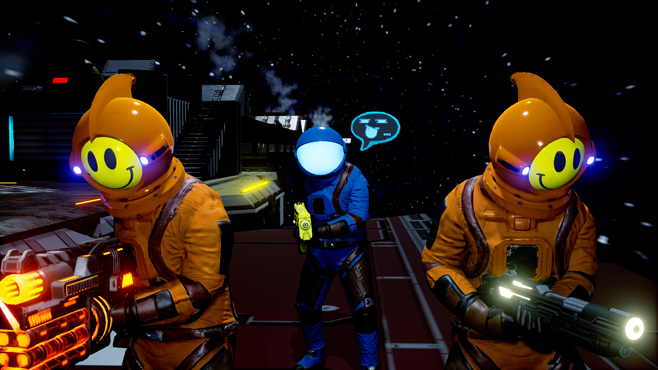 How does Unreal Engine help in developing a game like Unfortunate Spacemen? Are there any unexpected benefits or challenges?

Unreal Engine is the best engine I have ever used and I have nothing bad to say about it. The team is responsive, they fix issues and the community of developers always has an answer. Not only that, Unfortunate Spacemen is about 99% blueprints as well, which really opened up a gateway to visual coding that I never thought possible.

Besides hiring an artist or two and paying my rent?

I think the Dev Grant is absolutely wonderful. Up until this point, Unfortunate Spacemen was pretty much running on the bare minimum funding requirements (which wasn’t much.) I can’t express how grateful I am to Epic for giving us the opportunity to make Unfortunate Spacemen the game it needs to be for final release – a terrifying, hilarious adventure into space-based paranoia. Just make sure you bring your friends along for the ride!

You can learn more about Unfortunate Spacemen on the development blog. There is no firm release date, but the most recent update included a co-operative, wave-based survival mode. A tutorial for playing the Monster is also forthcoming because Geoff, “wants new players to feel super welcome in an environment where someone is constantly trying to trick you into being eaten.”