From a very cynical perspective, it looks like this.

Domed structures which could easily have been lifted from Rogue One, The Phantom Menace or Return of the Jedi. In less dreary terms, the buildings of Galaxy’s Edge are inspired by the buildings of Jedha City, Theed and Mos Eisley. These three cities are indicative of the “box with dome” style ubiquitous of the Star Wars galaxy. This style can be seen as “pre” Imperial since it both predates the Empire and lacks the metallic sheen of Imperial structures.

Another visual influence for Galaxy’s Edge is Jabba’s Palace. Essentially a terra cotta tea kettle with an attached turret, few other buildings in the Star Wars universe exhibit this kind of roundness and height. Many of the locations seen in Star Wars have either squat, earthen buildings of no more than one or two stories or are massive metallic structures. Jabba’s palace fits nicely in the middle, much larger than most other structures but with a rusted clay appearance.

These cities build up much of the backbone from what we know about where humans live. It makes sense that Coruscant would have a jumble of styles as the city-planet is both old and diversely populated. Cloud City has a wildly different style due to its specific needs, i.e. floating. But the “box with dome” style seen on many different, distant planets makes sense because squat, square buildings are easy to design and build and a domed roof would have architectural perks such as resistance to the elements.

But the “box with dome” style isn’t original to Star Wars. Neither is the massive circular design of both Jabba’s Palace, the Imperial Senate or the Palace of Theed. These all have Earthly precursors and inspirations. 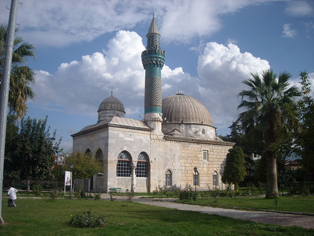 Many of these building’s find inspiration in Ottoman architectural themes. For example, the Green Mosque of Iznik would easily find itself at home in Galaxy’s Edge. Subtract the arches and columns and it is essentially a box, with a dome, and a tower (a minaret). Slap on some antennas and wash a little rust and you’ve got it.

Looking through photos of buildings constructed under the Ottoman Empire make it easy to see dozens of buildings that would feel at home in Star Wars. The Laleili Mosque could easily be at home on Jedha. The Enderun library could find itself equally at home on Naboo or Tatooine. It’s even hard to look at the Jedi Temple on Coruscant and not see five massive minarets evocative of the Blue Mosque in Istanbul or the Baitul Mukarram Mosque in Dhaka. In fact, many of the buildings from Istanbul constructed between 1300 and 1800 might be transplanted to a galaxy far, far away with little or no alterations, the main difference is the latter’s lack of windows.

To say that Galaxy’s Edge is inspired by the Ottoman’s might be giving its designers too much credit. The park is inspired by Star Wars, which itself draws heavily from other traditions. There’s a distinction between “draws heavily” and unabashedly appropriates that Star Wars as often run afoul of. Most science fiction is guilty of exploiting rich, “eastern” art history and architecture books to create worlds that feel foreign despite being absolutely of Earth. If you want to visit the palace of Theed, just head over to Marin County, California – their Civic Center is a massive Jabba-like tea kettle.

Science fiction should always be a door to something else. Instead of that galaxy far, far away being the end point, it itself should be the portal. The “architecture of Star Wars” was a portal for me to discover beautiful buildings in cities I’ve dreamt of going. A New Hope got me to watch Hidden Fortress. All it takes is stepping through that portal and opening your mind to more. So in a few years when you do make your way to Galaxy’s Edge maybe stop and appreciate the hundreds of years of art and design that went into crafting it.

On The Fifth Cord