I’ve often pondered about the appeal of automobiles. Perhaps it’s the endless curves of race cars like the Ford Mustang or Chevrolet Corvette. Perhaps it’s the intoxicating surge of power responding to the twist of the ignition key. Or perhaps it’s the thrill of slamming your foot down on the pedal, the reveling in the roar of over-revved engines, and the zipping across the asphalt at a breakneck speed of 200 MPH. And in their relentless pursuit of realism, studios behind countless racing games have tried to replicate such experiences to appeal to car enthusiasts.

Realism, however, is a nebulous concept. Like forcing a square peg in a round hole, the Need for Speed reboot in 2015, for instance, attempted to fit a ham-fisted plot into the game, although it does offer in-depth customization that would please die-hard gearheads.  Project CARS has a bit more success, delivering hyper realistic car handling, the fastest cars you can own at the get go, and allowing players to travel to courses that are dutiful recreations of real places. However, it trades playability for realism; AI competitors are deceptively smart, and winning means learning the ins and outs of car tuning, which may require binging helpful YouTube tutorials.

But different strokes for different folks, am I right? I’m no car enthusiast, and have no interest in tinkering with automobiles. Worse still are the mandatory car chase sequences in non-racing titles, like Sleeping Dogs or even Lego City Undercover; my lack of motor skills filled me with dread as I attempt to get out of the way of errant passers-by and oblivious drivers.

What I’m addicted to, however, is the rapid speed and fluid pace of futuristic racing videogames such as Redout, Wipeout and the classic F-Zero. Abstract vehicles like space pods and hoverbikes don’t even exist in real life (yet), so lofty concepts like realism and laws of physics are busted out in favour of incredible speed.

Antigravitor, an upcoming futuristic racing title, has no qualms about tossing realism out of the proverbial window; most of the time I’m just careening through the race tracks, the hoverbike whizzing by so quickly that the lights trails in the course make me feel like I’m inside a long-exposure shot. Wish to go faster? There’s acceleration pads, and collectible energy packs that you can use to outrun a competitor at a moment’s notice. Speed is a resource of spectacular opulence here. 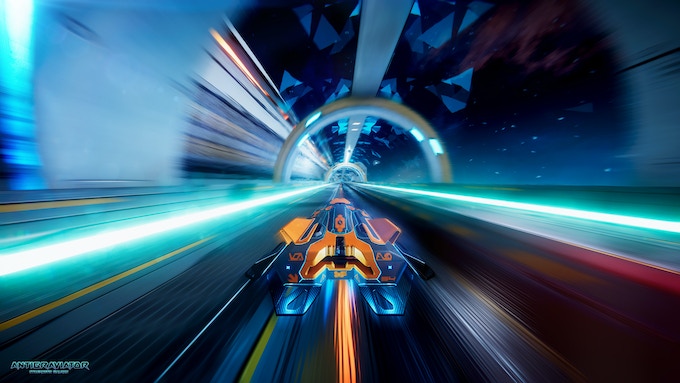 Plus, while its resemblance to Redout and WipeOut is immediately obvious, the game sought to set itself apart by allowing players to trigger various traps on friends, like falling boulders and rocket missiles. Apparently this form of aggression drives an offscreen crowd ecstatic, which means you’ll get more points for customize your vehicles with, maybe—it’s a feature that’s not part of the demo yet.

These features are all well and good, but what really attracted me to the game is the freedom to be as speedy as you can, even while diving down a plunging track or doing acrobatic stunts and somersaults on a looping course—all without slowing down the blistering pace. It’s an exhilarating experience, a constant but streamlined onslaught of lights and stimuli all vying to hasten the player’s race.

In other words, fuck realism. Antigravitor allows me to barrel across race tracks at a tremendous speed without wailing police cars ramming into me repeatedly. Strap me in because I’m ready for this ride.

The developers, Cybernectic Walrus, have decided to raise more funds for the game via a Kickstarter campaign. You can find out more about the game, and try out a demo, at the campaign page.

Shelfworthy – An Excerpt from Unwinnable Monthly 91