When a person says, “things are like they used to be” in relation to gaming, they don’t always mean it. More often than not, what they really mean to say is, “things aren’t like this one perfect moment.”

If it sounds unfair to judge current day-to-day gaming with historically perfect moments in the medium, that’s because it is. It’s impossible to defend this standpoint as a rule, but it’s the easiest thing in the world to sympathize with it. We’ve all had our expectations altered by thoughts of that one perfect moment.

As I watch Call of Duty: WWII‘s reveal unfold, I’m filled with an unmistakable feeling of bitterness. Not disappointment, doubt, or any other logical reaction to such a thing, but bitterness.  It would be foolish to apply logic to such a feeling, but I have no doubt that these strange feelings of bitterness spring from a place in the past. They were born in Stalingrad.

The original Call of Duty was split into three campaigns: America, Britain, and Russia. Of the three, the Russian campaign was arguably the most intriguing on the outset. The American and British sides of the war had been covered ad nauseum by films, games, and even the history channel, but the Russian front of the war? That was a story that few popular global pieces of entertainment had ever properly covered.

The opening level of Call of Duty‘s Soviet campaign borrows heavily from one popular film based on that subject, Enemy At the Gates. For many, that 2001 film was their first look at the historic Battle of Stalingrad; one of the deadliest, largest, and most impactful battles of World War II.  It’s always strange to praise such things in the context of a video game, but the brilliance of Call of Duty‘s take on the Battle of Stalingrad is that it felt decidedly unlike a video game. 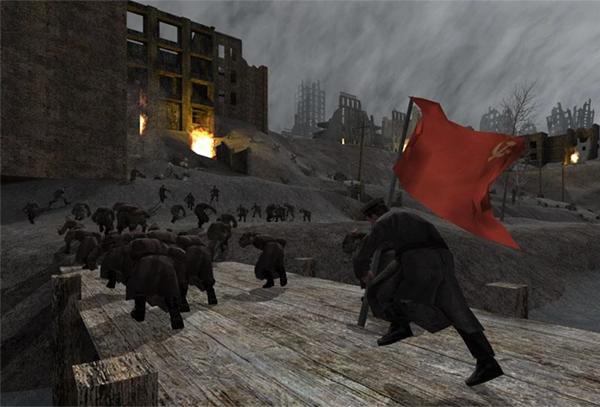 The “gimmick” of this level is that you do not have any way to defend yourself. It’s a gimmick in terms of the rest of the experience, but not a gimmick from a historical standpoint. Supplies really were that low and many soldiers were left without weapons. On the surface, such an event wouldn’t exactly make for a compelling video game level.

What makes it so compelling is that Stalingrad plays out like a typical Call of Duty level, minus your ability to return fire. What a fascinating contrast that is. You’ve spent hours being persuaded into feeling like you are some kind of super soldier and now…nothing. Yes, you could probably kill all the enemies if you had your rifle, but you don’t. Yet, you never feel more heroic than when you’re marching out into the middle of a battle with little more than your knuckles to your name. You also get to fully appreciate the role that weapons, and not men, play in the chaos of conflict.

Call of Duty: WWII could recreate that level pixel by pixel, but it could never recapture that feeling. Maybe that’s why I feel bitter. It has nothing to do with “things aren’t like they used to be” and much more to do with the question, “Why is it that the games and levels that portray war in a different light so easily forgotten?”

Then again, perhaps if Stalingrad had become the gold standard for Call of Duty level design it would have eventually become just standard. That’s the thing about perfect moments in time; you sometimes just have to learn to love them for what they are.

Battle of Stalingrad, Call of Duty

It’s Time for Board Games to Take a Stand