Little Nightmares is incandescently lovely. It has the kind of look that feels like a showroom model for how good the Unreal Engine is. At the same time, Little Nightmares might be one of the worst games I’ve played, mechanically, in a long time. In short, this is the prettiest game I never want to play again.

In Little Nightmares you play a yellow rain coated creature/child, trying to escape from the bowels of some sort of nightmare ship. Everything wants to eat you as if you are the finest of delicacies, every corner is dripping wet and affected – like it has been afflicted with some sort of creeping disease. There isn’t much in the way of plot to Little Nightmares, exploration will share with you little about the world and your character and the most you can gather is what you can see from the long-limbed or grotesquely fat enemies that want to eat you. Which is to say, not terribly much.

Little Nightmares sets an effective mood, one that falls slightly on the more stylistic side of creepy. It isn’t actually scary, more like Crimson Peak than The Babadook, where any horror comes from the acknowledgement of the messed up things that are happening to the character than actual fear. That and the fear that you will somehow mess up a very simple jump, fall to your death and then have to repeat that level again. 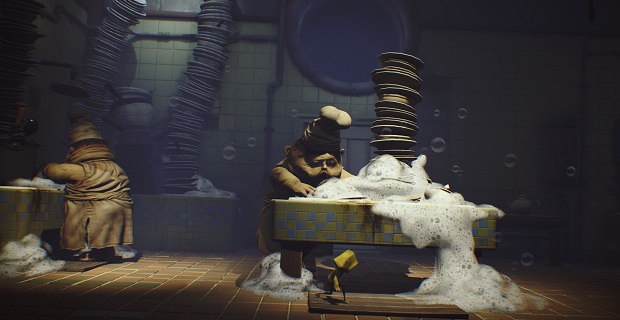 That is the true horror of Little Nightmares. A 2.5D narrative puzzle platformer, it is painfully difficult to control. Because of its extra dimension, it’s easy to misjudge which things are on your level, especially when the levels are dark. This is a game called Little Nightmares so the levels are obviously a bit dark. Timing of jumps can be incredibly precise due to the rocking of the ship, jump at the wrong moment and you can end up faceplanting down several stories to your death. Even when you’re not jumping, the precision required to run around the level quickly and without getting caught can be incredibly taxing.

As this is a platformer, you are frequently climbing over ledges and under surfaces which would be fine if the grab button weren’t literally the devil. You are frequently caught grabbing objects you either didn’t know were there due to the dim setting, or accidentally not grabbing a ledge you needed to grab right as a teeming horde of flesh descends upon you. That’s even if you can figure out what is something you can climb or just something where you’ll dangle flimsily as you await you doom.

Take one level, where you run across a tabletop avoiding the hands of some grasping overweight businessmen. After the third or fourth run across the table it has lost all of its tension and bizarre beauty, and you are instead feeling the unfairness of the game design. You’ve managed to clear the tabletop only to fail to hit the jump at the end, meaning you’ve had to run across the table again. The unfairness doesn’t feel inherent to the world, but rather to some contrived plot point. It is a half pound rack of baby-back bullshit, and there are several “puzzles” in the game that feel like that moment, caught running again and again across a wine-bottle laden table.

The puzzles themselves are either incredibly easy, or insta-kills that you must learn from. Most of the puzzles in Little Nightmares can be distilled into “run fast from the thing that is trying to kill you.” That’s not a puzzle, that’s an evasion. “Track down the key and then unlock the door” is another riveting puzzle type, in the sense that it requires almost no effort to track down the key as it’s just laying in the other room. The rest of the puzzles are where you die from doing something and must endeavor not to do so again. It’s as if someone took the puzzle design from Limbo and tried their hardest to make it less clever.

In another level you must steal a key from a high peg on the wall in a bedroom. You may think you need to jump on the bed (previous levels have shown that the beds have springs that give you a touch of height), grab the cord for the light and then swing to the hook. This will not work as the actual solution to the level is to just grab the key and then leave the room. That’s it. That’s not a puzzle. You just grab the key.

Narratively, there’s some interesting things going on with Little Nightmares. It manages to evoke images from the Holocaust museum as well as Hayao Miyazaki with equal measure, and its character design may not be scary but it is certainly unsettling.

Ultimately Little Nightmares breaks down on almost every level of its own description. It is a grossly simplistic puzzler, a pointlessly difficult and repetitive platformer and its narrative is delivered through mood rather than any actual story. Little Nightmares seemingly exists just to be made into incredibly attractive gifs on Tumblr rather than actually something playable.