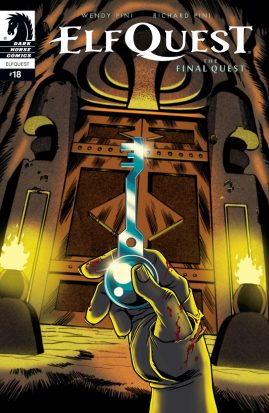 A sprawling epic with pockets of characters spread across the World of Two Moons, ElfQuest can zip around locations more frequently than an episode of Game of Thrones. This issue benefits from honing in a bit, with the majority of the narrative focused on Cutter’s group and Two-Edge descending deep into familiar territory, on a quest known only to Cutter himself.

(If it seems I’m going out of my way to avoid being too spoilery, it’s because I am. This column usually covers comics a week later than they hit shelves, so I can easily forget the rarer times when I’m posting a review on release day – like I did with my review of Final Quest #16. Puckernuts.)

There are major conflicts and minor squabbles along the way, and it’s funny to see how one informs the other. As is often the way with lifelong friends and family, intense argument is often borne of deep affection, and this is no less true with the elves. Even more timely a theme, I was particularly struck by a moment of in-fighting giving way to cooperation once a much larger threat presented itself. Should we all be as wise as the Wolfriders.

Sharp-eyed readers will catch my hands-down favorite moment late in the issue, when the reason for a certain character’s vague familiarity is revealed by a tiny portrait from the past.

With the run for EQ: The Final Quest slated to complete with issue #24, each new chapter feels more and more like we’re nearing the end of this long journey. Mysteries are solved and loose ends tied up, though there’s still room for surprises, if issue #18 is any indication. As a longtime fan, I feel like I grew up with these elves. I can’t wait to see how their story ends, but I’m not looking forward to saying a final farewell. Thankfully, there are six more issues to savor. See you in March, EQ! 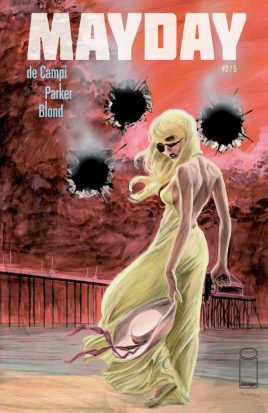 Being a natural pessimist, the first thought I had when I bought Mayday #3 was a sad one: “oh man, the series is almost over.” Mayday is a five-issue mini-series, and I almost always say that a limited run makes sure a story stays tight, so if this is the only negative thought I have after reading this issue, than so be it!

The main thrust of our spy/political thriller proceeds, although with less bloodshed and bullets than the previous two issues. The action in issue #3 is understated, driven primarily through dialogue and images. Soviet agents Rose and Felix have escaped the CIA and FBI and are en route to their handler in San Francisco. Even though Rose and Felix are partners in this mission, they come from different intelligence agencies (Rose is KGB; Felix is GRU) so it should come as no surprise when Rose throws Felix under the bus (metaphorically speaking, although that can still really happen. This is an Alex de Campi story after all) for the delays they’ve encountered so far. Does Felix suspect anything, or is he too occupied by his gunshot wound and broken hand? Felix’s countrymen think he’s a bit of a dunderhead, but I feel like he’s more aware of what’s going on around him than he lets on and he’ll make his doubters pay dearly.

The CIA continues its pissing contest with the FBI over who is to blame for Rose and Felix succeeding to the degree that they have. The CIA continues to misinterpret and bungle things, as they have always done (anyone interested in the history of the CIA and its incompetence since inception should read Tim Weiner’s excellent Legacy of Ashes.) Instead of working for the good of their country, the CIA and FBI continue to spin their respective wheels as individual agents force their personal agendas forward.

I’m hesitant to go into much more detail about the story of Mayday. I don’t want to spoil the magic for those who have yet to read it. And I urge everyone to read Mayday as it’s the finest comic book storytelling I’ve come across in quite some time. De Campi weaves an intricate tale of spies, government conspiracies and vicious gun battles like no other. And the visuals…oh my stars and garters! The panels are beautifully cinematic, displaying a great understanding of, and original use of, angle and perspective. Tony Parker (art) and Blond (colors) are a great team. They know how to light a scene, day or night, and their subtle use of shadows (like when someone is in a phone booth or skulking in an alley) is a small touch that enhances a panel and shows these two are masters of their crafts.

So if you’ve been riding along with Mayday this far, kudos to you. If not, I’ll give you a few more quick spoiler glances at issue #3 to see if this gets you on board: a stolen plane flying upside down, a heart-warming scene of a doped-up Felix dancing with Rose in a suburban street, and a house on the same street wherein a girl, um, dances with herself while listening to the Velvet Underground. Trust me, it works! 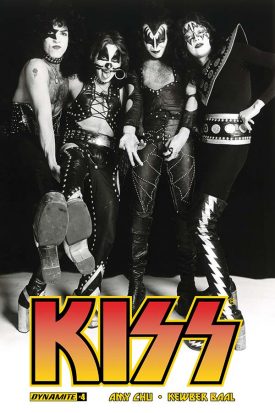 I’m hoping that the creative team for this series is enjoying the chore assigned to them. Four issues in and everyone involved still seems to be making sense of all this Kiss hogwash, and how it applies it to a story about kids in the dystopian future living in an underground city, based on the failed Kiss concept album Music From The Elder. I feel like the slow reveal has been going on way too long with this series, and this is just another step in an overlong decompression. The goal? A trade paperback collection that maybe some Kiss fans will buy out of completist duty.

So at this point the kids have eluded capture by the police, and have learned that the Protectors are friendly with them. The Protectors are robot versions of Kiss, who sometimes look like members of the band and sometimes look like ED-209 from Robocop, with Kiss flare painted on them. Apparently they recognize the twin kids as genetically linked to Blackwell, who was the Big Brother founder of the city they live in, which has existed for hundreds of years.

Since the two kids are biologically connected to this Blackwell guy the Protectors follow their orders and take them to a hidden room that looks like the preserved basement man cave of a Kiss fan. Inside the basement room are Kiss instruments, Kiss clothes, Kiss toys, Kiss posters and most likely a lingering smell of BO and sweatsocks. There are also Kiss mech suits for the kids to ride around in, the Gene Simmons one even having a tongue that hangs out for some reason.

I was initially confused because why don’t the kids just order around the original Protector bots some more? I guess it ultimately makes sense for them to have the mech suits though, so that the kids in the suits and the Protectors can beat each other up in the climax of this issue. During this sequence there is also a chance to squeeze more lyrics in from a crappy Kiss album, this time “Under The Gun” from the Animalize album:

“Let’s hit the highway, I’ll take you down/Shoot out in the night, looking for action/The main attraction is back in town/Press the pedal to the metal, on your mark, set, go”

Animalize is one of the albums Kiss made without makeup. The lyrics are still generic rock lyrics written by committee that somehow mash up T-Rex, Sunset Strip hard rock, recycled Kiss lyrics and nursery rhymes. When looking the album up I read that Paul Stanley meant for the album to be a step away from the recording trend in the 80’s of making everything digitally. What that has to do with the lyrics cited in this issue, I don’t know. I guess ultimately that’s where this series is going, to a point where the remnants of civilization move past their dictatorship and the prison they live in.

Again, this is not a slam against the creative team, they’re doing fine with what they’re given. From what I’ve read Amy Chu actually enjoyed chopping up a bunch of Kiss source material and throwing it into this comic book crock pot. You take lemons and you make lemonade, and not every Dynamite adaptation can be fun source material like Army of Darkness, Xena or Vampirella.

Still it’s hard separating the art from the artists that are Kiss. There’s another point in the issue where one of the kids may as well be quoting Kiss lyrics: “Is anything real? Was there ever a sun? Or stars?”. On the one hand, you basically want Paul Stanley himself to come busting through the wall and not a robot, saying something like “I’m ya star baby!” Which would be weird, because the main protagonists are probably all 14-16 years old in age, while Paul Stanley and Gene Simmons are hairy and gross walking STDs. It’s also really weird when one of the young female protagonists bumps her butt against a mural of drummer Peter Criss’s face to open a door. Unless it’s in a goofy cartoon like Archie or Scooby-Doo, the members of Kiss should not be anywhere near children, but in this case it’s a Kiss comic so I guess they have to show up in some form at some point, so there’s your dilemma.

The last scene of the issue really sat uncomfortably with me. They’ve unlocked the next clue in their quest, and the last panel is of the four kids staring up at a giant digital DNA chart that’s framed by the four painted faces of the members of Kiss. The computer teacher and guide Morpheus is relaying data to them and informs them that “Our DNA recognition shows Mr. Blackwell is very much alive. In both of you.” To the two main twin protagonists.

No one should be getting Ancestry.com data while Gene Simmons is staring back at them.